Check out the 2014 Mini-Mural Competition Album on our Facebook page to vote for one of six ROY G BIV member art pieces to be displayed in the Short North Arts District! The art piece with the most Likes will be displayed in the District along with ten other mini-mural installations. Voting ends January 19! 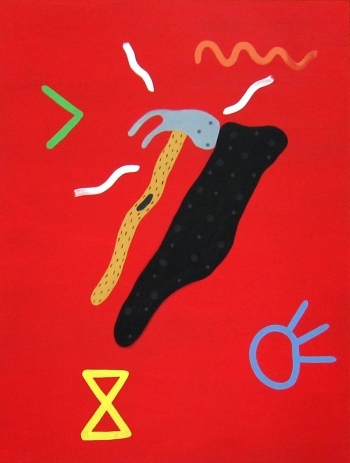 Cast Hammer is about societal momentum and moving forward. The hammer has been thrown and the viewer is waiting for it to fall. Symbolic elements for time and comet allude to ancient lore and a measurable acceleration for everything in contemporary life. Through the immediacy of social media and Internet culture, people are awakening, becoming more acutely aware of cosmic values, and less trusting of policy. The hammer is foreshadowing to a new train of thought. 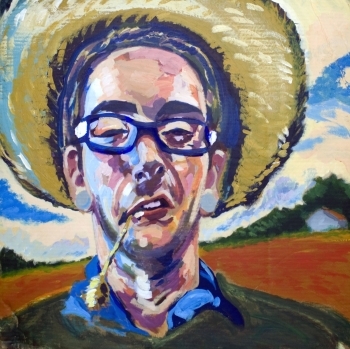 My work focuses on the interaction between subject and viewer. I attempt to translate the energy of my subjects through the canvas by juxtaposing colors that elicit emotional responses. The stark complimentary colors establish a discordant yet captivating emotional climate. The figure's ambiguous facial expression acts as a focal point inviting questions and interpretations. 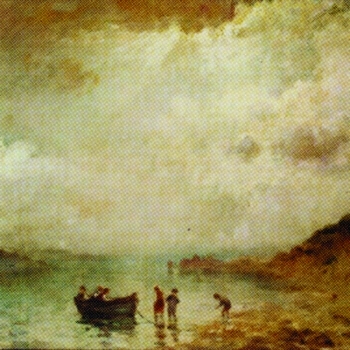 The story begins with the artwork of my great uncle Felix Resurreccion Hidalgo, a Philippine revolutionary and painter in the late 19th century. I took a photograph of his painting La Marina from 1911, which is considered a national treasure, and housed in my family home in Manila. From a photograph of a painting to a print I re-created using a 'pop art' filter, the work seen from up close is an assemblage of parts, taken out of context and reunited in a synthetic whole. From afar, the image of a Romantic boat scene comes into view as the mind's eye places the composition together. In this quasi-anthropological project, I ask myself: how can I explore the concepts of re-appropriation and repatriation through objects of dissonance? 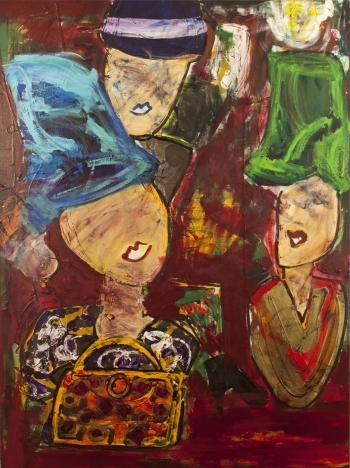 In this piece I took inspiration from Louis Vuitton’s editorial advertisement based off of the Autumn/Winter 2012-2013 ready-to-wear collection show in Paris, conceptualized by well-known designer Marc Jacobs. It wouldn’t be unusual that this pairing derived such a strong statement and showmanship as it did, and it brought me to create a series of LV 1 through four that brings sense of chaos, nostalgia, futurism and relative peace with present. At the time I created this piece I was channeling the young woman I wanted to be, how I was trapped on this train with no tracks, and in addition among others who had nothing to seek themselves. In the past, present sub part-tense, I am drawing something about my passion and love for photography, illustration, conceptualization, styling and “fashion as a high art” in an umbrella term. LV 1 is hand painted, color coordinated and modern contemporary abstract thought.

In my artwork I appropriate and recast images specific to distinct cultures to symbolize contemporary subject matter. As an artist, I am acutely attuned to the various aspects of contemporary life that surround me, but also very much interested in the history, traditions, and characteristics brought forward through generations of time past that define a particular place. My prints and drawings reference my research of present day culture, and exploration of history. The drawing "Domesticating the African Wolf" expresses the confinement in our bodies as well as in our way of life due to the growth of cultural norms. 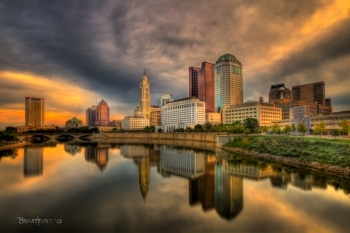 Downtown Columbus, Ohio is a vibrant, progressive and ever-changing community built upon a long and rich history seen through its riverfront setting and the visual tapestry of its historic and modern architecture. Spellbound is part of a large body of photographic work began in 2013 to record and convey a sense of the community’s past and present. This digitally unmanipulated image was captured on an overcast, storm-threatening August morning as sunlight momentarily broke through an opening in the clouds. It was made using a modern digital camera and vintage photographic glass filters to create and convey a sense of its present day landscape in a historic photographic fashion.