The Short North Arts District was alive with art installations in unexpected places during Art al Fresco 2011 Saturday, September 10, 2011. Birds on a fire escape, blue urban ninjas lurking in a vacant lot, and an urban garden in a bus stop were just some of the whimsical, thought-provoking installations that dotted the District.

For this juried event, the committee walked the District and viewed all of the installations; talking with the artists and deciding which of the twelve installations should be named Best of Show. The jurors were all Short North Arts District aficionados: Ryan Orewiler, artist at Studios on High Gallery; Marcia Evans, owner of Marcia Evans Gallery; Alexandra Kelley Fox, owner of public relations firm Alexandra477; Jeff Smith, president of the Short North Civic Association. The quality of the art was topnotch and inspiring so they had some difficult decisions to make on which ones were the best but with much deliberation our jurors decided on the top four installations: 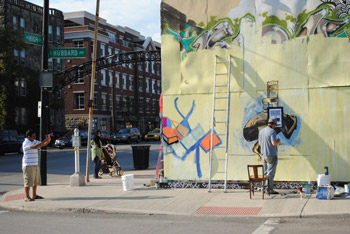 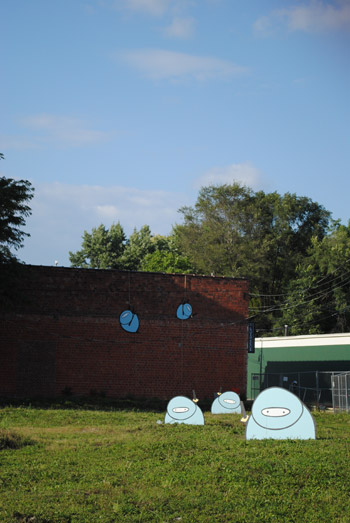 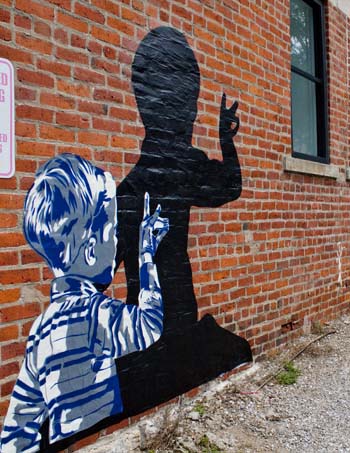 “Alleys Can Be Scary” by Stephanie Rond 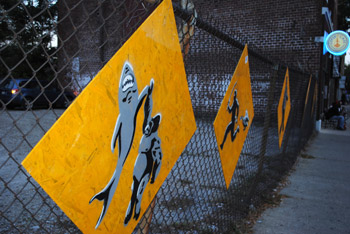 “You Take Yourself Too Seriously” by Joe David Mitchell

Most Sustainable Award: “The Life Cycle Tree” by Jennifer Deafenbaugh

Best Use of Nature: “Bus Stop” Modification by Kimberly Webb

Most Artistic Use of Paper: “Paper Pulp Installation” by Daniel Colvin

Best Use of Technology: “QR Code Exhibit” by Wonderland

Ryan Orewiler described the event well when he said “I would like to thank the artists involved and the Short North for offering artists the public space to display their art.  I was delighted to be on the committee that awarded those who donated their time and art to Art al Fresco 2011. I was very impressed with all of the works displayed.  Each installation was unique and added excitement to the canvas of the Short North.”

A big thanks goes out to the performing artists who added their artistic talents to Art al Fresco: The Liddlers, KaTanya Ingram, Mad Lab, One World Entertainment, The Live Performances at Brothers Drake Meadery and the Aaron Quinn Jazz Band.