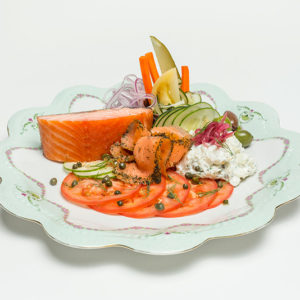 David Miller, President & COO, said he and Founder & CEO Cameron Mitchell wanted to bring this style of cuisine to Columbus with a reinvented, modern approach, and feel their latest concept will be a good fit for the Short North Arts District neighborhood and its community. “We love the diversity,” Miller said.

The namesakes of the restaurant are Miller’s father, Ed, and his uncle, Harvey. The best friends and World War II veterans, who were inspirational in Miller’s life, were longtime “big fans” of delicatessens. “[Harvey & Ed’s] is a tribute to them and a tribute to a classic cuisine that needed to be reinvigorated,” Miller said.

Though delis did the heavy lifting for inspiration, Harvey & Ed’s offerings are decidedly more curated, taking culinary cues from establishments across the country. The menu and cocktail program were created through an extensive development process involving diligent testing of menu items over several months. 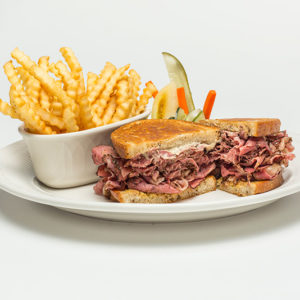 For lunch, choose from a selection of cured fish, served with Block’s Bagels and an array of traditional toppings including cream cheese and capers, or classic sandwich favorites like the Reuben and Hot Pastrami. Soups (including Matzo Ball, naturally), salads, small-plate “Noshes,” and sweet treats like babka and blintz round out the mid-day offerings. Heartier plates are featured on the dinner menu, including brisket, braised lamb, seared seabass, and roasted halibut. A brunch menu with breakfast sammies, French toast, and eggs prepared several ways will also be available on weekends.

The full-service sit-down restaurant will also feature a bar with classic and themed cocktails, such as a Manhattan, Martini, Negroni, and “A Real Mensch,” a Glenmorangie, honey, and lemon concoction.

Among those involved in the menu development and conceptualization process were Executive Chef Jonathan Basch and General Manager Jill Armstrong. Basch, who has been working in restaurants since 2001, joined the CMR family as a prep cook for Marcella’s Ristorante, Pizzeria & Wine Bar in 2007. In addition to several promotions at various CMR concepts over the years, he has received numerous culinary awards, including the 2007 Apprentice of the Year award from the Columbus Chapter of the American Culinary Federation.

Armstrong began working as a server at The Pearl Restaurant, Tavern & Oyster Bar in 2013 to put herself through The Ohio State University. After falling in love with the industry and CMR’s culture, she gradually worked her way up through several of their concepts to her new position with Harvey & Ed’s. Miller said the two up-and-comers were chosen for their roles because they “deserve unique opportunities due to their hard work and dedication.”