The Short North Arts District’s newest small, locally-owned apparel boutique opened quietly over the chilly post-Thanksgiving weekend in November 2019, celebrating the occasion with friends, family, and customers. In the month and a half since then, Small Talk owners Chloe Crites and Suzanne Riska have already started making plans for their second location, including doing more of what their followers love and holding fun, new events and pop-ups. We chatted with them about the shop, why they chose to open it in the District, and what they’re looking forward to in 2020. 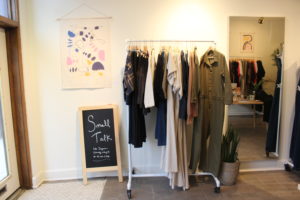 Crites and Riska opened their flagship location in Clintonville in 2017 and gained a following because of their commitment to carrying inclusive, ethically handmade slow fashion. “We want people to know we have a lot of different options and there’s something for everyone in our shop,” Riska said. She and Crites each have retail experience working at large, national brands, which they enjoyed because they love fashion, but they were bothered by the lack of transparency about where products are made and the limited size options offered by most brands.

The women met while working at the same company and, once they realized their shared passion, decided to open their own store that is honest about where goods are made and that offered extended sizes. Since opening, they have renewed this commitment and 80% of the brands they carry will offer extended sizes by spring. They find inclusive slow fashion brands to carry through a variety of resources, including more traditional avenues such as showrooms and at market in New York, as well as through newer methods such as Instagram. This year, they will also begin carrying a selection of men’s items, though they noted all items they sell can be gender neutral. 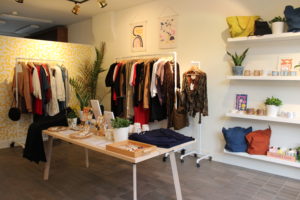 These updates are exciting to the women particularly because of the opportunity to reach new customers in an arts district. “There are already some really great boutiques [in the Short North] that I feel like we’re different enough from,” Riska said. Crites added that numerous new customers have said they’re familiar with Small Talk but had yet to make it to the Clintonville location and were excited for their Short North store.

Part of the reason Crites and Riska decided on the District was good timing and a good opportunity presented to them by their new landlord, The Wood Companies. However, the focus on culture and community in the neighborhood was also an important factor. “The Short North is a place where people appreciate art, and I feel like our clothes are pieces of art; I know that sounds cheesy,” Riska said, laughing. “They’re made by very small, independent designers who are very much practicing a craft, and we felt like people would appreciate that here.” 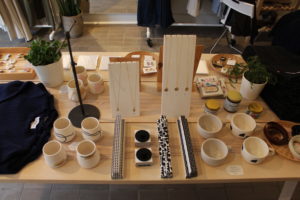 Gallery Hop and other events were also a feature of the neighborhood they looked forward to because of the foot traffic they bring, and so far, their expectations have been met. “Our first Gallery Hops and Holiday Hop were really fun; there’s a lot of organized events that feel like a huge benefit to us here,” Crites said. In addition to participating in neighborhood-led events, the women also plan to host their own in the store and on its attached patio, which could include pop-ups, workshops, cocktail hours, and their signature event, the Femme Clothing Swap.

Though they were able to have the space cleaned, painted, and organized in the week before they opened, they are already planning updates, including knocking down a dividing wall and installing exterior signage. “The Wood Companies did a great job, but we put it together really quickly and are excited to make it our own and feel like us,” Crites said. They are also excited for the completion of a new parking garage that will be located at the corner of E. Lincoln and N. Pearl Sts, which will make them even more accessible to customers.

Crites and Riska are also looking forward to warmer weather to help spread the word about this location and to meet their neighbors, though many have already stopped by to welcome them. “It’s scary going into a new neighborhood; we don’t want to step on anyone’s toes, but we’re really excited to be here. Everyone has been so supportive,” Crites said, noting the owners of nearby businesses rowe, Ladybird, Tigertree, Peace + Love + Bling, Sharon Weiss Gallery, Marcia Evans Gallery, and Brassica have come into the store. “Other business owners are really excited to hear what we’re about, and they really like it; that’s been really cool,” Riska said.

Small Talk is located at 12 E. Lincoln St. Keep an eye on their social media channels for details about an opening party in March 2020.