There is no question that, collectively, the Short North Arts District boasts the best dining experience in the city of Columbus. No other area has this many independently owned restaurants all within walking distance from one another, not to mention their close proximity to unique retailers and posh art galleries. A prime example of these restaurants that has been celebrated on both a local and national level is Rigsby’s Kitchen. The food, the atmosphere, the service and the people: all are ingredients into what makes Rigsby’s a true dining experience, not just a place you go for dinner. No one knows that better than Sous-Chef, Forbes Rigsby.

Looking at Forbes’ surname, it’s evident that the Upper Arlington native’s relationship to the restaurant goes beyond just a place of employment. Forbes works for his father, Kent Rigsby, founder and head chef of Rigsby’s Kitchen.  Forbes’ mother is successful restaurateur, Tasi Rigsby of Tasi Cafe. 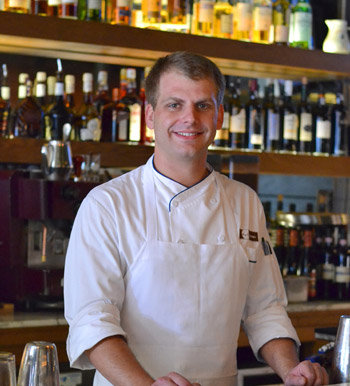 However, unlike some other styles of family business, Forbes was not just given this job. He has been making his way up since 2002 when he started working in the kitchen washing dishes and doing odd jobs like peeling potatoes. Ten years later, his endurance and dedication to this restaurant have helped take Rigsby’s Kitchen to a level many other restaurants only hope to achieve.

When Forbes began at Rigsby’s Kitchen, he says he knew nothing about cooking, “I started by just watching other people in the kitchen and getting involved on each station to learn the techniques and the functions of each job.” Little did he know, years later, this method of learning was key to helping him run the kitchen so efficiently. “It really helped me be able to jump in and out of any task,” says Forbes “and it also helps me teach the new guys quickly and effectively.”

Being part of the business for so long, it comes as no surprise that Forbes’ favorite part of working in the family is running the kitchen. By design, when guests enter Rigsby’s, their eye-line is immediately 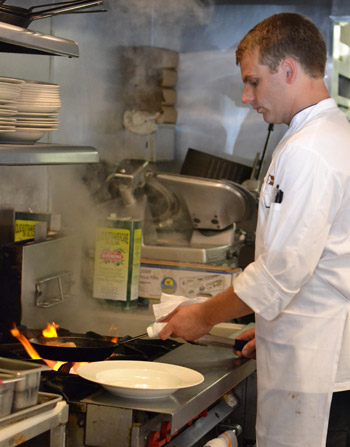 directed into the open kitchen where the delicious menu items are being prepared and it’s common to get a wave from Forbes himself, “I really enjoy working in this type of atmosphere and layout because it’s the people that make my day a little better.”

The philosophy of Rigsby’s Kitchen is to provide customers with as much local, sustainable, fresh food as possible. Because of this, their seasonally changing menu is sometimes dictated by what is available around Ohio.  Although sourcing local ingredients is not rare in today’s restaurant market, Rigsby’s Kitchen stands out in the crowd because of their caliber of delectable dishes.  Not many restaurants can maintain such an opulent menu while staying true to their local roots.

In the light of living local, it is fitting that celebrity Chef Jamie Oliver has been a source of inspiration to Forbes.  Both Chefs are dedicated to using fresh, local foods and both uphold the simple truth that local ingredients are better for you, your taste buds, and the environment. 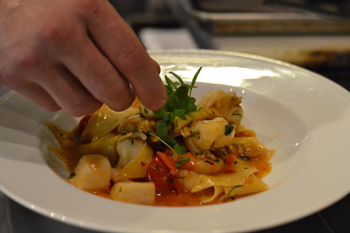 Forbes points out, “Local ingredients do not mean just vegetables and fish. We offer a 34 oz Porter House steak from Ohio cattle.” With a half grin, he adds, “There is a certain employee who has eaten the entire thing himself, but I don’t think I could do it.”

Hid behind a generous layer of modesty, it is quite apparent that Forbes Rigsby cares tremendously about what gets put in front of his customers.  Forbes has helped Rigsby’s Kitchen find the balance between knowing what customers want and delivering it without compromising their brand values.

Restaurants come and go in this town but one thing is certain, those that survive have a passionate team behind the fare. It’s no coincidence that Rigsby’s Kitchen is approaching three decades of acclaimed service and it looks like Sous-Chef Forbes Rigsby will be leading this restaurant into an even brighter future.