With the city of Columbus buzzing with excitement over the bicentennial celebration, the Short North Arts District initiated one of their biggest District collaborations with 10x10x10: 10 murals, 10 galleries, and 10 openings. The initiative pulls together public art, Short North galleries and local artists that are all living, working in, or associated with our great city. The idea began as the brainchild of Ralph Rosenfield, art enthusiast and Short North supporter, as a refreshing way to display public art since some of the permanent District murals will disappear over the next year due to construction. Though the project was a collaboration of 10 major galleries in the District, Sherrie Hawk, owner of Sherrie Gallerie was an integral leader in making it all a reality. This mural series takes an inside look at each of the installations and the inspiration behind them. 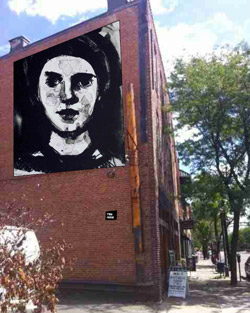 10x10x10 speaks volumes about the Short North as the premier arts district in the region. With the collaborative idea for the ten mini-murals in place, Hawk worked with the participating galleries to decide on the placement of each mural. When it came to hers, the brick wall on the side of the building housing Mary Catherine’s Antiques seemed the perfect fit.

Hawk has always been passionate about Columbus and supportive of the community so it was important for her to choose an artist that shares similar values. The work displayed entitled Amherst Maid by the talented Sid Chafetz, seemed like the obvious choice. At 90 years old, Chafetz has been a part of the Columbus art scene since he moved to the city to teach in 1948. “He is beloved and deserves this honor,” says Hawk.” As a pioneer in printmaking and lithograph, Chafetz’s work has inspired many. This particular piece is simple, with less detail. As a result, it has a strong visual impact.

The 10x10x10 project has only been in place for a month, but already you can see the effect it has had on the city & the Short North. There is a sense of unity among the galleries and they have already seen an increase in traffic since the installation. The media coverage surrounding it has been astounding, with both mentions and articles in numerous local outlets praising the initiative. Hawk hopes that this project will help take momentum for future endeavors for the arts district.

Special thanks to the Jack & Zoe Johnstone Foundation, the Kridler Family Fund, and the Short North Alliance for their support on this project.