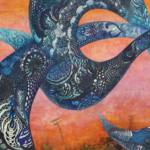 Bring to life the 2017 Short North Temporary Mural Series Six in the Short North with Six Word Stroll and Share, happening August 27, September 3, and September 17. Each Stroll and Share will run from 1:00pm – 4:oopm in collaboration with a Short North Arts District Gallery. Participants will experience a detailed, 60-minute tour of up to four Six in the Short North murals with a neighborhood-based docent. The tour will include an intimate conversation about the themes presented in the six word story which inspired the mural, followed by a 90-minute, facilitated six word story writing workshop (called a slam) with author Larry Smith.

Larry Smith is best known for his internationally acclaimed Six Word Memoir Project ©, which features dozens of published anthologies of six word long stories that pointedly capture the history, identity, and humanity of those who write them. 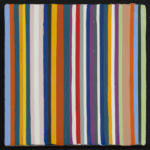 Stroll participants will get to author their own six word stories about the Short North Arts District, Columbus, or their own neighborhood, and the change occurring within all of them. Participants will then share and discuss their stories with the other participants. “Six Word Stroll and Share” is free. For more information on the mural series, visit shortnorth.org/sixintheshortnorth.