Art winds through the house at 24 E. Lincoln St, empty save for a unique exhibit of pieces circling the dining room and bedroom walls, resting on kitchen shelves. They are a bonanza of bold colors, fantastical scenes and eerie faces, and many pulse with humor. Their owner, Columbus art collector Thomas Arlen Wagner, chose them according to a fun local twist: every piece has a connection with a Short North Arts District gallery, and many of the artists are from Ohio. 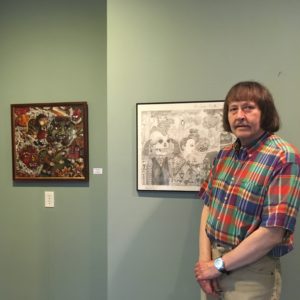 Wagner, who favors a 1970s look including high-waisted Lee jeans and a haircut that’s part bowl cut, part bob, was born in Fostoria, Ohio. He came to Columbus in the 1970s to attend The Ohio State University, where he graduated with a degree in Zoology. “As a kid, I collected butterflies and other insects. I think I had the collecting gene,” he said. His focus on collecting art began around 1984, when he collected a series of humorous comics by Mark Beyer found inside the back cover of a weekly punk-rock-infused UK magazine, New Musical Express.

As you walk around the art-studded home, Wagner rattles off information about the artists featured in the exhibit. He knows which are from Ohio and which studied at Columbus College of Art and Design. In his overall collection of 700 pieces, roughly half were created by Ohioans.

The exhibit of 66 artworks includes the piece by the first Columbus artist Wagner collected. Purchased in 1997 from Marcia Evans Gallery, the piece by Scott Galloway is a digital photo collage that focuses on an eerie, shirtless boy, who has the open-and-shut eyes and O-shaped mouth of a plastic doll, his skin glistening like the silvery glean of a gelatin print. Though not the first piece of artwork Wagner bought from a Short North gallery, it was this piece that inspired him to start looking for great art locally. 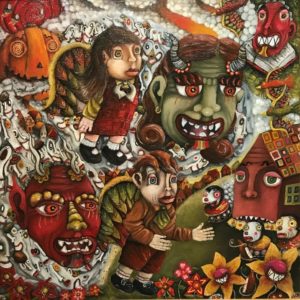 Four pieces by Columbus’ Daniel Ferlan of Sharon Weiss Gallery are also featured. Ferlan often creates detailed pencil drawings of his future paintings, and the exhibit has both. Fantastic creatures and people with ghoulish faces walk his surreal landscapes and crowd the air, giving his work a haunted feel. Wagner has collected Ferlan’s pieces for over 15 years.

Wagner is also a long-time collector of Morris Jackson, who’s pen-and-ink drawing, called “Hangover,” features a sky with odd bits flying through it, like the state of a hungover brain. Jackson and artist Terry Klausman – who also has a piece in the pop-up gallery – has shown at Lindsay Gallery.

In wandering through the house, it’s fun to discover where artwork is tucked away. In the closet-sized kitchen, shelves hold pottery and glass pieces, including the first piece Wagner bought in the Short North around 1987 from the now-shuttered Ohio Ethnographic Gallery: a Mexican folk art wood carving of a mermaid with short black hair, thick eyebrows, and a forlorn expression. The artist is unknown.

In the dining room hangs the two most overtly political pieces in the show, both of which feature a lithe woman in a mini-skirt who is eclipsed by a tree sprouting toxicity – in one, the cartoon-like heads of US leaders, Osama bin Laden, Muammar Gaddafi, and others. Bubbles of doomsday text talk of war, oil, hate, mad cow, you name it. The pieces would be more anxiety-inducing if it weren’t for the cheerfully vivid colors and cartoon-like figures.
“She’s known as the homeless artist,” Wagner said of Jane Winkelman, represented by Lindsay Gallery, who drew comics for California’s Street Sheet, a newspaper sold to help the homeless. Today, one of Winkelman’s paintings hangs in the Smithsonian. 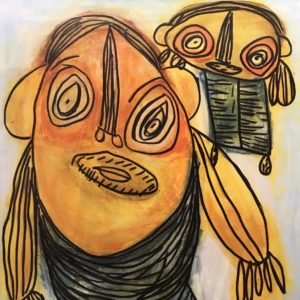 The bold red painting of a farming family over the sealed fireplace, looking like a wicked American Pastoral, catches the eye. “It’s her real family,” Wagner said of the artist, Columbus’ Barb Vogel of Sherrie Gallerie, making one wonder how she feels about family life. Looking up the stairs, there is a painting of two figures with bodies like compressed slinkies and wide wondering eyes, created by Columbus artist Wallace Peck of Lindsay Gallery. Its placement at the top of the stairs somehow feels like a greeting.

The main reason Wagner lends his art to galleries is to support the artists. “I know my artists, and I want them to continue doing work,” he said. “I like the idea of supporting artists and I think people should dedicate a portion to their income to supporting artists, like tithing to a church.” He know most people won’t share this conviction, but he is proof you don’t need to inherit a fortune to collect art. Wagner was a Columbus post office employee before retiring last Halloween.

Many of the artists whose pieces Wagner owns, and that are featured in the pop-up gallery, obtained success after he bought their work. “I’m really proud of that fact,” he said. Although the artists’ success must have raised the value of the art, that’s not something he considers before buying. He loves art for art’s sake and buys what he likes. “I don’t think people realize how much joy it brings you being surrounded by art. I just sit and look at pieces I own and it gives me such pleasure.”

The pop-up exhibition of Wagner’s collection of local and national art that he found in the Short North will be live through June 10, and will be a highlight of the June 2018 Gallery Hop.