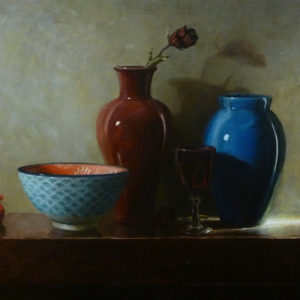 This April, Brandt-Roberts Galleries will feature a solo exhibition of the works of Kendric Tonn, titled “Songs in Red and Blue and Gold.” His most recent body of oil paintings consists of nude figures, and of still-lifes both austere and playful.  In the figurative work, the human form takes center stage, represented with impressive anatomical accuracy. Of the more than twenty new works, Tonn will also showcase a selection of exquisite still-lifes.  The structured arrangement of the objects, intentionally placed hues, and dramatic lighting assert significance to the inanimate items. 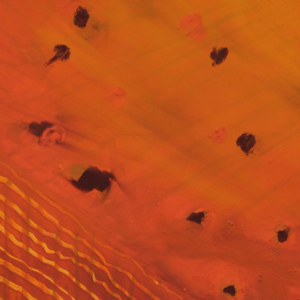 Featuring Dream in Color: New Works by Alteronce Gumby and Stephanie Luening until April 16, 2017. This exhibition features two very different artists who share an interest in color. Yale University graduate Alteronce Gumby, currently a resident at the Fondation des États Unis à Paris, creates tonal paintings using color as a metaphor for identity politics, empathy and self-liberation. Dresden- based Stephanie Luening, a graduate of the Dresden Academy of Fine Arts in Germany, creates installations that involve the transformation of liquid color. The products of time, chance and atmospheric conditions, Luening’s paintings materialize slowly into colorful primordial swirls. Whether through paint or melting ice, both artists examine the most basic phenomenon of light and human perception: color. 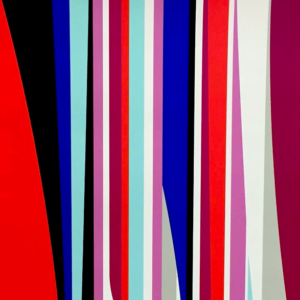 David Skeens is back with 8 new works all on the theme of love. They promise to be even more popular than his wildly successful first series with us. Also featured are two beautiful new screen prints by Ohio-born, Los Angeles-based painter, Dion Johnson. The vivid colors are the perfect antidote to winter blues. 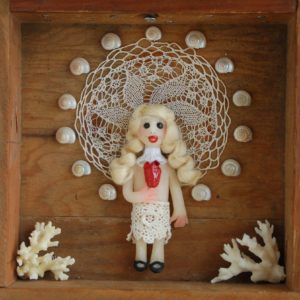 Please join Lindsay Gallery for their group show featuring Amber Groome and Deborah Griffing. Art-making at it’s best,  whether it comes  from  so called “outsider” artists or academically trained artists, is often the product of obsessions and the need to control them.

Amber Groome tells stories of her struggles as a woman fighting mental illness. She puts the pain into her polymer clay dolls, obsessively organizes  them in boxes, and then exorcised the demons by sending  them out into the world. In recent years Groome has begun showing her collage and watercolor work that expands on these themes, and the two edged swords of domesticity and faith.

Deborah Griffing says she has become unsettled by the awareness that what we perceive as our reality is not a static certainty but a delicate landscape that can shift unexpectedly.  She uses her art to sort through, mull over, and adjust to an ever-changing existence. “ I often feel as though I’m a traveler creating destinations; places where I can unleash my obsessive tendencies, wallow in repetitive details, all the while maintaining a satisfying sense of control.” 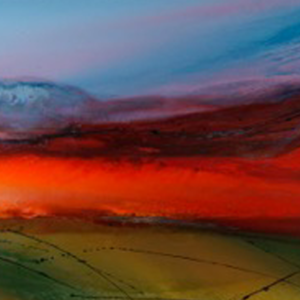 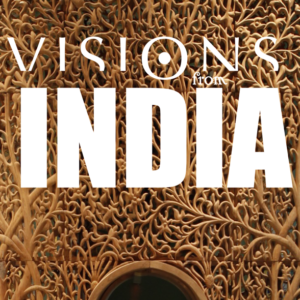 The Pizzuti Collection will be open on Gallery Hop Saturday from 11:00am through 5:00pm. See “Visions From India” which is a celebration of India full of color, innovation, and delight featuring large-scale installations, lush colorful paintings, video works, and remarkable sculptures from the 21st century. An accompanying survey of Francis Newton Souza will present one of the most important 20th century Indian painters. 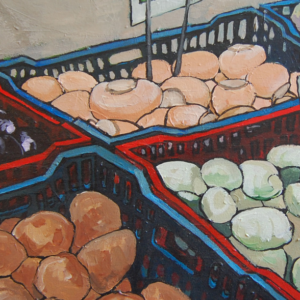 Featuring “From the Collection”, works from the art collection of Nancy Haitz and Ronald Fauver. Ron and Nancy were active members of the Short North community, filling many roles from president of the Short North Business Association, board and commission members in Italian Village and documentarians, especially of events and art openings, until opening their own business in the Short North selling cookware and freely giving advice and encouragement. Along the way they bought artwork from many of the galleries in the Short North. Most of the work is by local artists. All work is for sale and will be priced in a Silent Auction format, which will end on April 30, 2017. Selections from the collection will include: Charles Massey, lithograph, Barbara Veatch, mixed media, Peter Thompson, oil painting, Pat Kirwin, mosaic mixed media, Karen Kunc, woodcut print, Robert Glasgow, silkscreen, Carol Cline, oil painting, and Robert W James, painting. 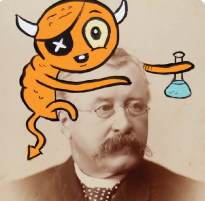 Rivet welcomes Jellykoe to our gallery for their first solo exhibition. Bedeviled – a collection of repaint antique photographs featuring mischievous little guys. This show will encompass 24 original paintings as well as a selection of prints, stickers and enamel pins by the artist duo.

An opening reception will be held Saturday, April 1 from 7- 9pm with the exhibition on display through April 30. 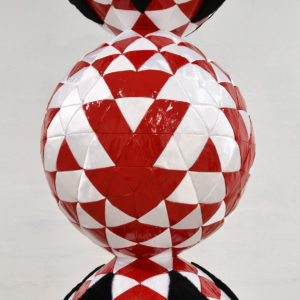 ROY G BIV Gallery presents work by Galen Gibson-Cornell and Max Adrian. Gibson-Cornell’s colleges deconstruct found materials. Adrian’s quilted sculptures offer stoic comforts. The work of both artists will be on display from April 1–29. There will be an opening reception on Saturday, April 1 from 7:00-10:00pm and an artist’s’ talks and closing on Saturday, April 29 at 2:30pm. 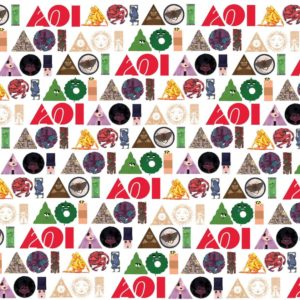 “AOI: 20th Art Of Illustration Anniversary Show” which will be featuring select student illustrations from the Columbus College of Art & Design. Gallery Hop Reception on April 1, from 6:00-10:00pm. Exhibit continues thru April 29. 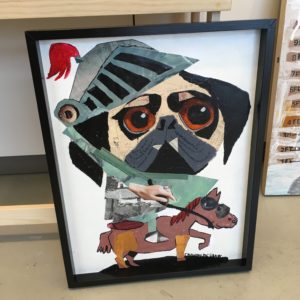 Sharon Weiss Gallery, at 20 E. Lincoln St., will open “Welcome to Charlottesville,” new works by Charlotte McGraw. Charlotte McGraw spent a considerable part of her young adulthood institutionalized during the dark days of Ohio disability management. It was this experience that planted the seeds for Charlottesville, the world she created where every “creature” is honored and accepted for the unique skills they bring to the community.

Weiss found out about McGraw after she visited the Goodwill Art Studio and. “I found the work to be bold and creative and striking and intriguing and I connected to it right away,” she said. “This work stands on its own merit and is extremely cutting-edge. It’s going to be extremely appealing to the public.”

McGraw began her artistic journey with the Goodwill Art Studio and Gallery 2006, when the arts program at United Cerebral Palsy merged with the Goodwill studio. She and art instructor Cody Miller came as a package deal, and with his encouragement, McGraw began pulling the threads on her litany of painful – and joyous – life experiences. In her earlier work, she turned her feelings of disenfranchisement into empowerment through the adventures of her curious creatures like Ferdinand the altruistic blood sucking mosquito who holds the record for blood donations, Hercules the bird who just wants his mother to let him fly, and Bruce the stifled academic who wants to be an artist. They all found their bliss in Charlottesville.

“I relate to all of the creatures because they are the ones that society does not pay attention to,” said McGraw. “It does not matter what your disability is in Charlottesville because everyone here is loved.”

At Sharon Weiss, Sir Kay of the Donkey Basketball Fundraiser, Miss Guian of the Ministry of Silly Trots, Sir Mojo of Air Quality Central and Miss Tegyr of the Pothole Committee will join the gang. Their chivalrous code dictates they, “Never do outrage nor murder,” “Always flee treason,” and “Smile because no one cares if you don’t have teeth,” among other pithy slogans. 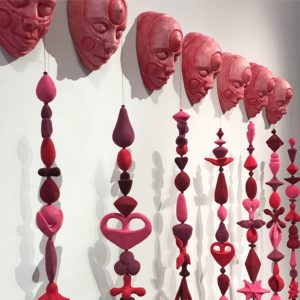 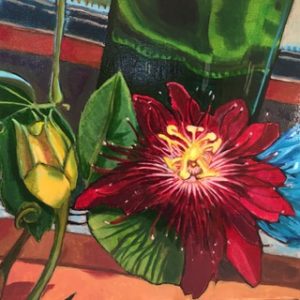 Studios on High Gallery will celebrate National Poetry Month by showcasing two- and three-dimensional art inspired by poetry. Select artists will create works inspired by a favorite poem of one of their patrons, while others will write a poem themselves and create art to illustrate their words. Others still will pick an inspiring piece by a well known poet. Local poets will be at Gallery Hop from 4:00-6:00pm to read their works for the show opening. 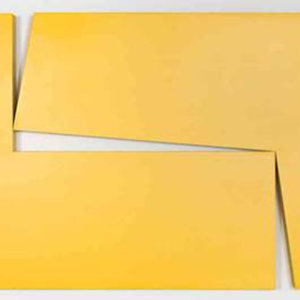 Wexner Center for the Arts

Featuring Sarah Oppenheimer: S-337473 artist residency award project until April 16. “Sorting all this out is immensely pleasurable, and happily there is no resolution.”—Roberta Smith, The New York Times, on Oppenheimer’s D-33. Experience the Wex in entirely new ways with S-337473, a newly commissioned work conceived specifically for the center’s unconventional architecture by category-defying artist Sarah Oppenheimer. Comprised of two large-scale, glass-and-metal structures anchored by a unique pivot mechanism—what the artist refers to as “switches”—S-337473 rotates at a 45-degree angle when activated by visitors. In response to your touch, thresholds turn into beams and columns become screens as they are reflected by the work’s surfaces. The exhibition space is reoriented around new axes, altering the flow of bodies and ricochet of sightlines through the built environment.

The Wexner Center will also feature Carmen Herrera, “Lines of Sight” until April 16.
Featuring more than 50 works, Carmen Herrera: Lines of Sight focuses on the artist’s work from 1948 to 1978, when she developed the signature hard-edged style that she continues to employ today at the age of 101. Displayed chronologically, the exhibition begins with paintings made while Herrera was in Paris (1948–54), works that echo cubist innovations of the early 20th century in a postwar context. Herrera unflinchingly continued to explore geometry, space, and the line in increasingly spare and refined compositions as she returned to New York in 1954, when Abstract Expressionism reigned supreme. You’ll also see stunning works from Herrera’s Blanco y Verde series (1959–71) and her dynamic Days of the Week series (1975–78), which illustrates her deft play with figure-ground relationships, as well as wooden sculptural “estructuras” that reveal her deep interest in architecture. Carmen Herrera: Lines of Sight is organized by the Whitney Museum of American Art. 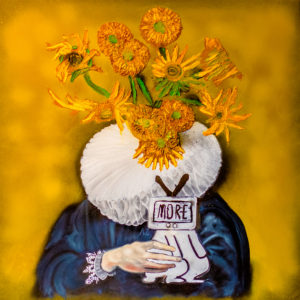 Featuring artist Aaron Bleep for the month of April. 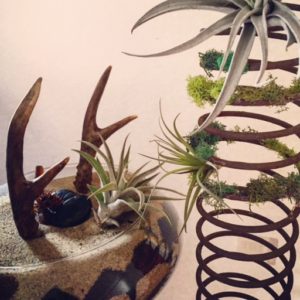 First Commonwealth Bank will be featuring the work of professional artist Michael Creath for April’s Gallery Hop and through the end of April. Michael has a Landscape Design Degree from Columbus State and has lived in Columbus since 2002.  He has been in the botanical world for 14 years and does anything from landscape design to living art and all things in-between with plants. He likes to say, “I provide Horticultural Spice to Columbus. I have work in restaurants, offices, and homes all over the city.” Michael is also a founding member of Placemakes, a team that builds Parklets and creates people spaces, here in Columbus. Michael will be on hand to greet guests at the April Gallery Hop so stop by from 6:00-9:00pm to enjoy his unique artwork. Light refreshments will be served. 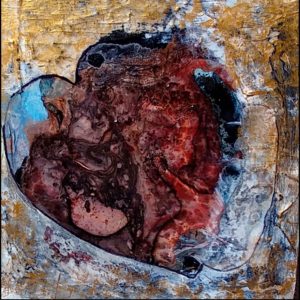 Gallery Denmark is featuring self-taught artist Michael Bush from April through June. He experiments with different paint mediums on canvas to push his creative process. Rather than using brushes in his work, he uses unconventional items to move and manipulate the paint. 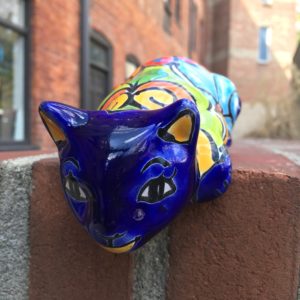 For April Gallery Hop, Global Gifts will be showcasing colorful fair trade Talavera pottery from Mexico, just in time for spring! Talavera is a traditional art going back to the 16th century, handmade in Puebla, Mexico. The pottery is made from the natural clay of the region and is characterized by a white base glaze under brightly colored designs. Our selection includes planters, garden (or indoor) wall art, and freestanding sculptures. As always, enjoy fair trade coffee samples and baked good from the Women’s Bean Project while you shop. Sign up for a chance to win this adorable mini shelf cat! Winner will be drawn during Gallery Hop! 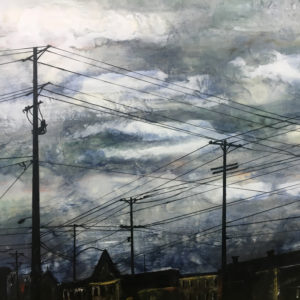 Beginning April 1, MOUTON will be displaying the works of Columbus artist, Kellie McDermott.

Fascinated with landscapes, particularly abandoned spaces that over the years have changed to become perennial records of decline, Kellie finds inspiration from the urban landscape of the small town where she grew up to the familiar sights of the Columbus skyline. Though the scenes she creates appear frozen in time, they are in a slow, continual state of transformation. 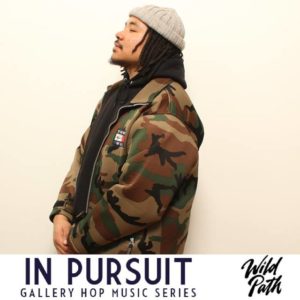 Pursuit is hosting a concert event at the April Gallery Hop from 7:30pm-9:30pm. The ‘In Pursuit’ Concert Series is a one-of-a-kind in-store music series in the heart of the Short North that is welcoming Correy Parks to the stage. Correy is a phenomenal Columbus hip-hop, vocal, spoken word artist. 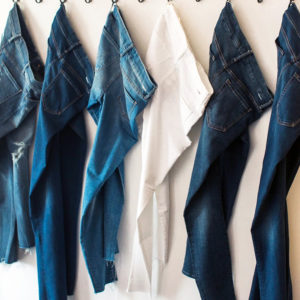 This month for Gallery Hop Rowe Boutique will be having a pop-up sale at 698 North High Street. Anyone can stop by between 12pm-9pm to shop items discounted up to 90% off. We’ll have brands such as Smythe, MLM, Greylin, LNA, Good hYOUman, Mackage and Mother. The usual Rowe Boutique storefront will also be open so people can shop all the new spring arrivals. 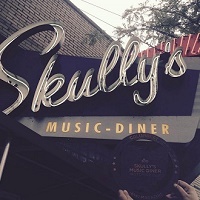 Featuring The Happy Fits 6:30pm and Get Right with DJ Tron.