The Short North Arts District is home to some of the most exciting and engaging public artworks in Columbus.

From iconic permanent murals to colorful Short North Arches and the wildly popular annual Short North Temporary Mural Series, the streets in the Short North Arts District are filled with enlightening and often unexpected works of art. Download a map of the gallery and art guide.

Taking images of public art works and sharing your experiences with public art is one of the most fun things about a visit to the Short North Arts District. As a community, we care deeply about the artists who have contributed the artworks we enjoy every day. Please make sure to credit artists and their galleries where they are noted on the helpful plaques next to artworks throughout the District when you share your photos. If you have an interest in using an image of a public artwork in the Short North Arts District for commercial use, please contact the Short North Alliance at info@shortnorth.org to obtain information on how to credit or compensate the artist for use. 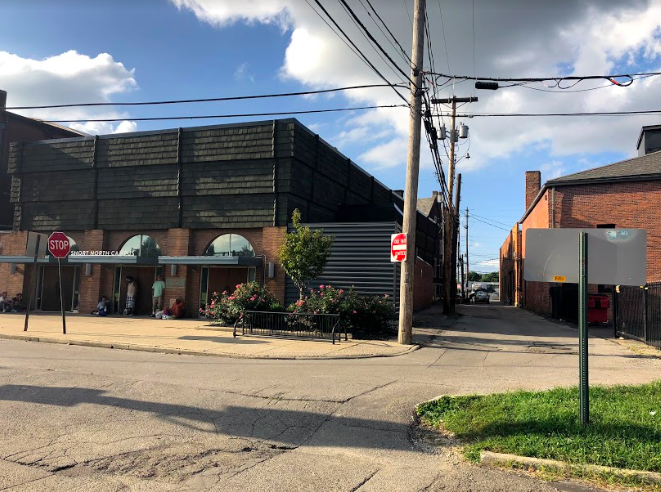 The Short North Arts District is home to dozens of murals, including the popular Short North Mural Series and a number of large-scale permanent works.

The Short North Alliance and 13 partner galleries and art institutions, with the support of the the Greater Columbus Arts Council, present the sixth rendition of the highly popular Short North Mural Series titled Unconventional: A community-curated celebration of our unconventional city.

The temporary murals are installed on the exterior brick facades of 25 buildings along High Street in the Short North Arts District. They consist of high resolution images of art works that are printed on vinyl and heat-adhered to buildings. The process results in a work of art that looks painted on the building.

The Short North Mural Series has become one of the most anticipated and celebrated projects in the Short North Arts District and represents an incredible community-wide collaboration among the District’s art galleries and many of our community’s leading arts institutions. 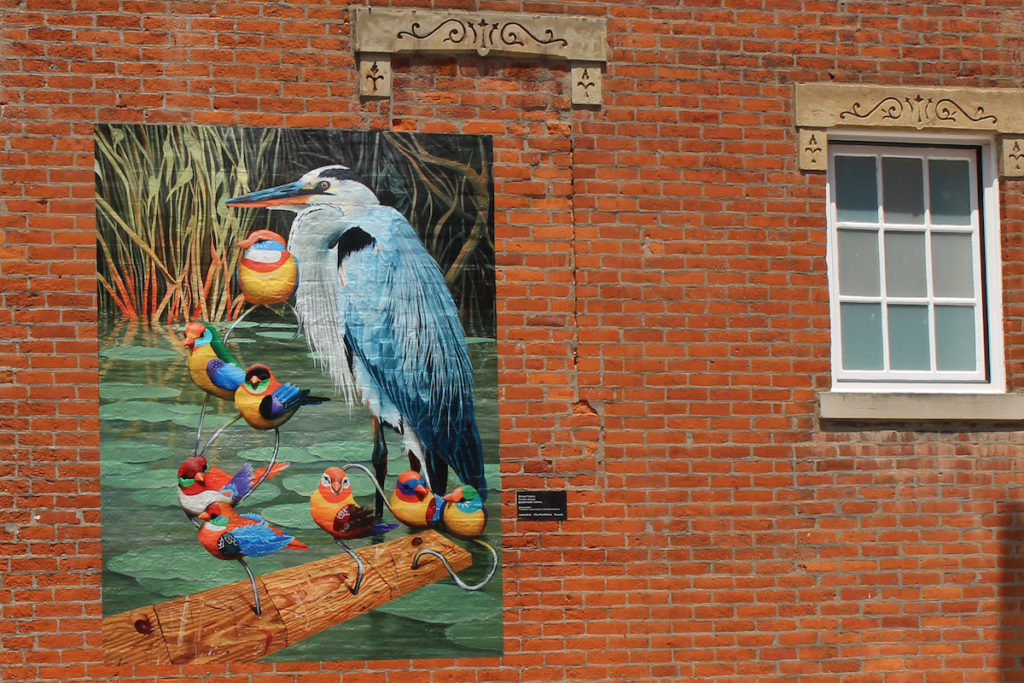 The Journey
The Short North Alliance, in collaboration with AJ Capital Partners and The Graduate Hotel, commissioned California-based artists Ryan Sarfati (@oh_yanoe) and Eric Skotnes (@zoueh_skotnes) to create and install three permanent public art murals on the exterior building walls of the new Graduate Hotel located in the Short North Arts District. Sarfati and Skotnes also led an artist-in-residency program for members of the Columbus Community. Click here to watch The Journey feature on Broad & High, and click here to see the process of the making of The Journey.

Take the journey when you discover The Journey in the Short North Arts District. Click here to watch The Journey come to life, and download the augmented reality app to experience how the murals come alive here:

The Journey was made possible with support from: 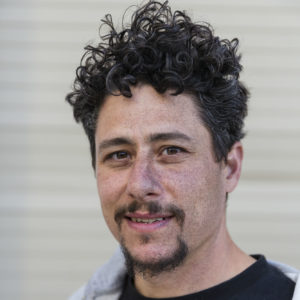 Ryan “Yanoe” Sarfati is a Belgian-American artist born in Baton Rouge, Louisiana, who moved to Los Angeles in the early 90s. He began graffitiing at the age of 11, and by the age of 17 was one of the most prolific names in Los Angeles. He has painted in over 20 countries and has appeared in multiple art publications around the world. In recent years, Yanoe has shifted his focus to fine art in the form of large-scale murals, studio works, and commercial works. Some of his clients include Nike, Urban Decay, Headspace, Google, Apple, Facebook, and Netflix. 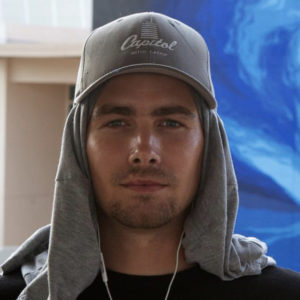 Eric “Zoueh” Skotnes is a Los Angeles artist who embarked on graffiting at 11 years old. His obsession with constructing large-scale graffiti inspired him to design murals. Despite his unique esthetic creating abstract graffiti-derived murals, he was dissatisfied with his perceived artistic limitations and pursued a rigorous art education at the Art Center College of Design from 2005-2009, where he studied illustration and fine art. During his last term at the Art Center, Skotnes started to receive commissions from movie and television production studios. He has done paintings, graffiti, murals, and illustration for studio productions such as Brooklyn Nine-Nine, Family Tree, How to be a Latin Lover, Murder in the First, The Good Place, Marvel’s Runaways, and Last Man on Earth. Skotnes is currently working on a series of figurative paintings based on human interaction that blends his style of graffiti art with classical figurative painting.

Are You A Life-force?
CAAMP, which includes band members Taylor Meier, Evan Westfall, and Matt Vinson, are a local band on the rise. To celebrate their national success, they gifted a mural to the community that they love and call home. The permanent mural, titled Are You A Life-force? was created by Meier’s mother, local muralist Sally Meier, and CAAMP keyboardist Joe Kavalec. Inspired by the band’s album By and By, released July 26, 2019, the mural depicts the stories told through their music. It is located on the Buttles Avenue side of Bakersfield in the Short North Arts District. 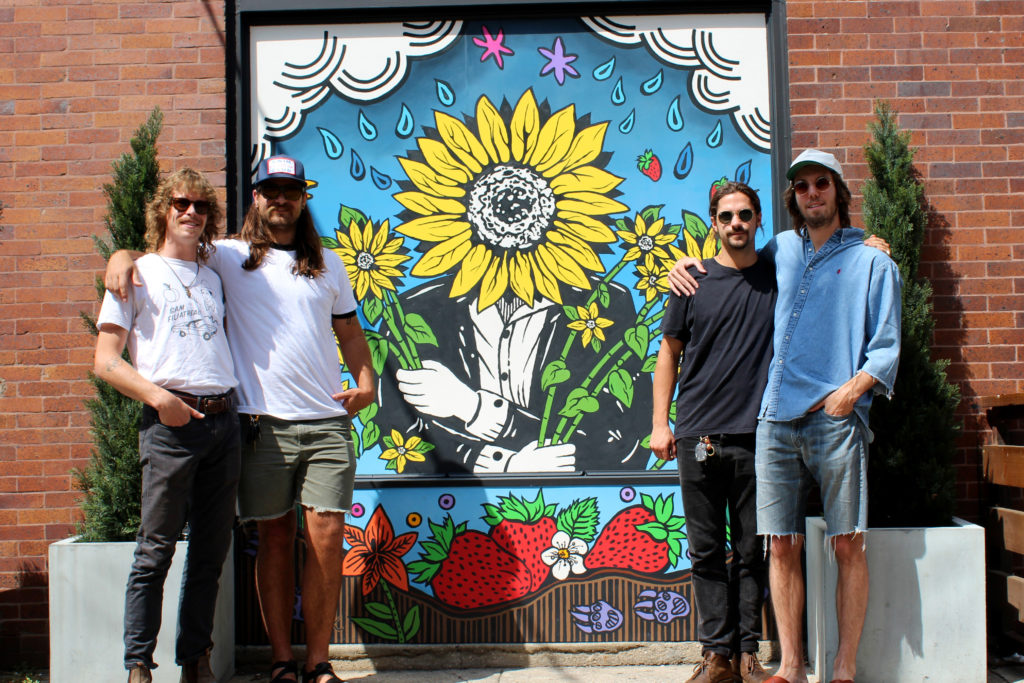 The Messenger Wall
Located on the north-facing side of 1204 N. High Street, The Messenger Wall is a site-specific sculptural wallscape mural that was installed in the spring of 2017. The Messenger Wall commemorates the incredible messengers in our community who represent empowerment and give credence to the voices of the under-served, neglected, and overlooked. The artwork honors the legacy of the Short North Alliance’s founding director, John Angelo. Angelo means  “angel” or “messenger” in Italian. John was a consummate messenger for the neighborhood. He championed lasting programs for, events in, and improvements to our community. Like John, this building’s owner, Community Housing Network, and its tenant, Dress for Success Columbus, serve as profound messengers to those they serve. Artists Eric Raush (@erauschy) and Jen Kiko (@ottoiko) chose the messenger pigeon, set against an abstract backdrop of imagery from the Short North Arts District, to represent these treasured community messengers. The mural is made of carved and pigmented brick. 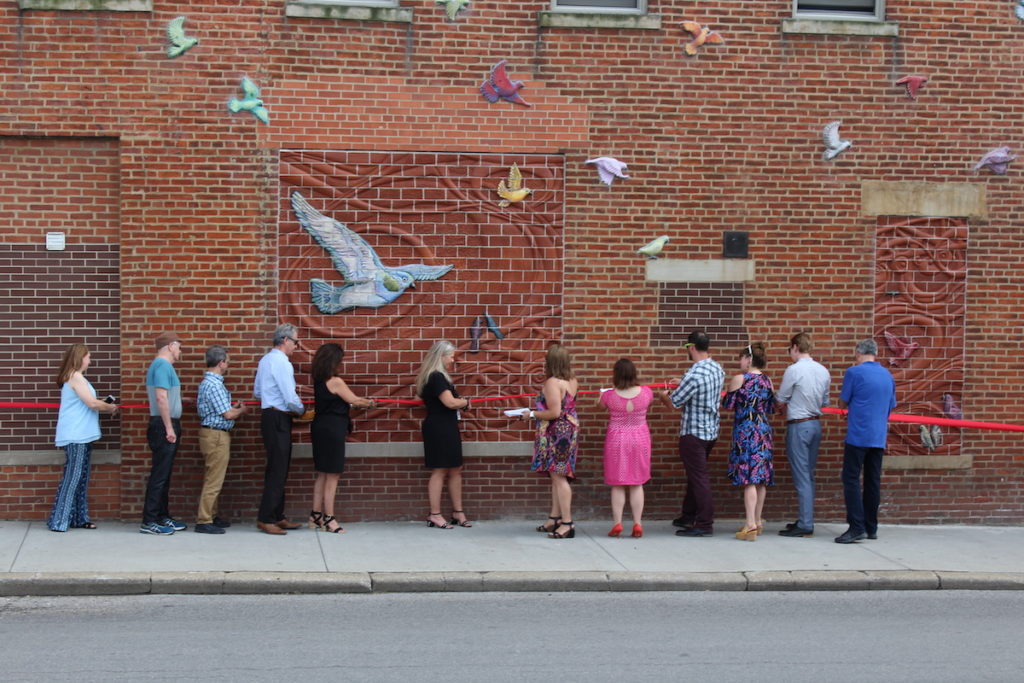 Short North Gothic
The Short North Arts District’s twist on Grant Wood’s iconic classic, American Gothic, is one of the images for which the District is most well known. Located on the corner of N. High Street and E. Lincoln Street, Short North Gothic is on the outer wall of another famous Short North Arts District spot – Jeni’s Splendid Ice Creams. The original piece depicts a farmer and his daughter, while the District’s skillful reproduction by Steve Galgas (@gtron3000) and Mike Altman (@mikealtmanart) has flipped the daughter on her head and switched the subjects’ positions. The beautiful mural embodies the spirit of the District and makes a statement of its own. 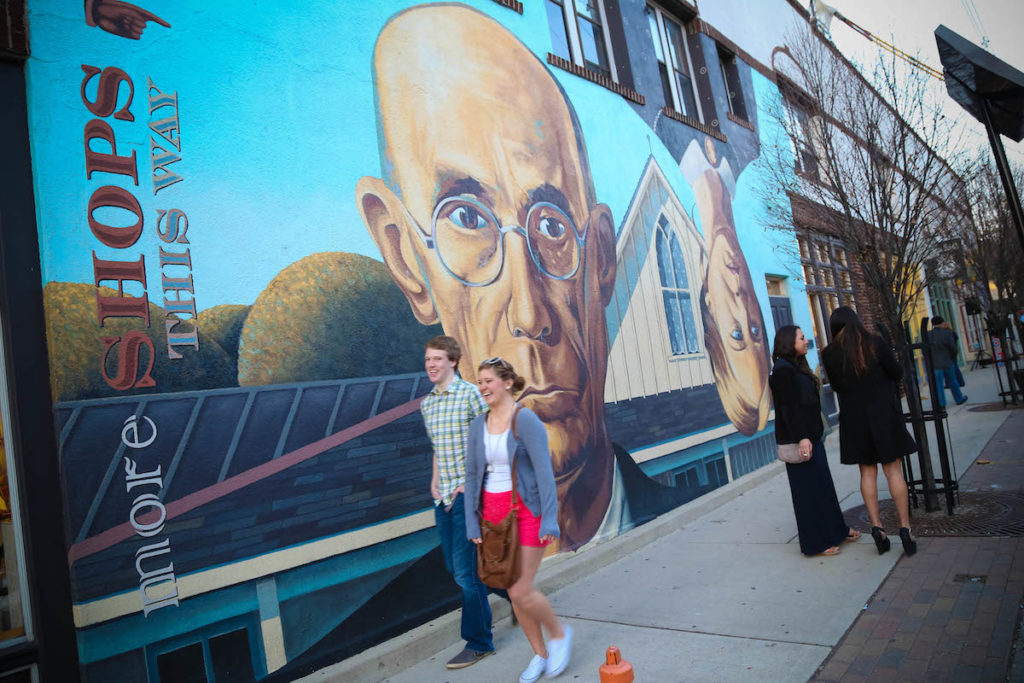 Mona Lisa
An icon in both the art world and the Short North Arts District, Mona Lisa helped put Columbus on the map as an art destination. Painted by Brian Clemons, the public mural is the only one in the District not visible from High Street, but is an important symbol of the neighborhood. The famous muse’s enigmatic smile is as beautiful as the original, but in signature Short North Arts District style, she was painted sideways on her ear, rather than upright. 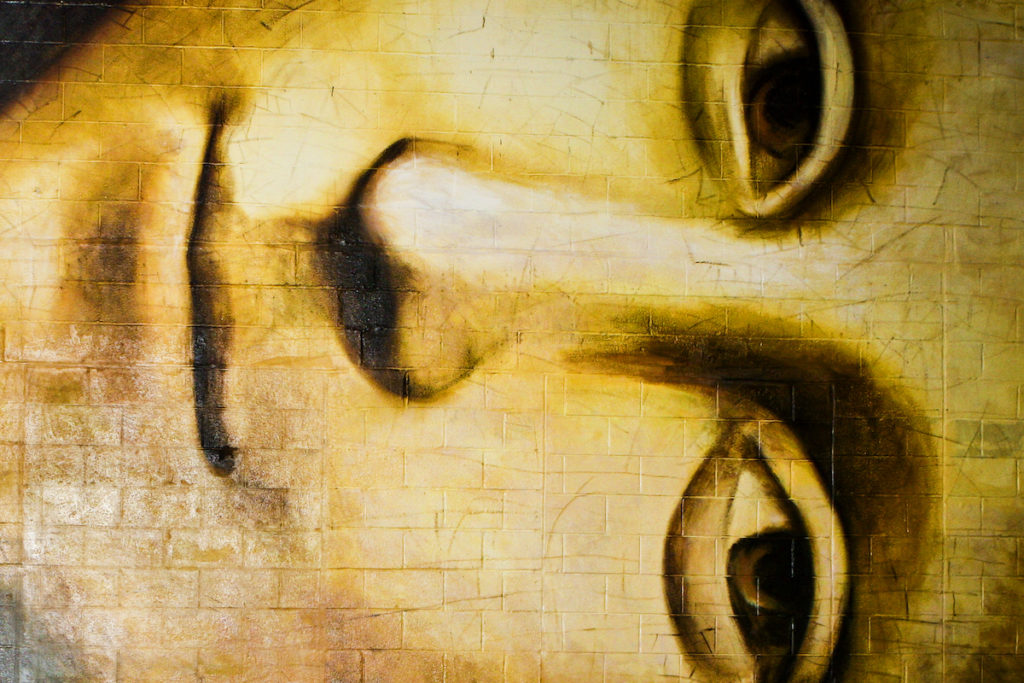 The Short North Arts District is home to a number of sculptures, which make the neighborhoods buildings, street corners, and parks a joy to discover.

Columbus artists Stephen Canneto and Judith Spater have created a dynamic sculpture that is suspended nearly 30 feet up in the air at the northwest corner of Second Avenue and High Street. Spanning nearly 25 feet in length, the three part sculpture, titled Jubilation, delivers a dance of light and color that changes by the minute. Evoking the vibrancy and diversity of the Short North Arts District community, the sculpture is a celebration of the joy found within our community. Comprised of stainless steel, dichrolaminate, acrylic, and hundreds of Bluetooth controlled LED lights, the sculpture is one of a number of newly installed and planned permanent public artworks in the Short North Arts District. 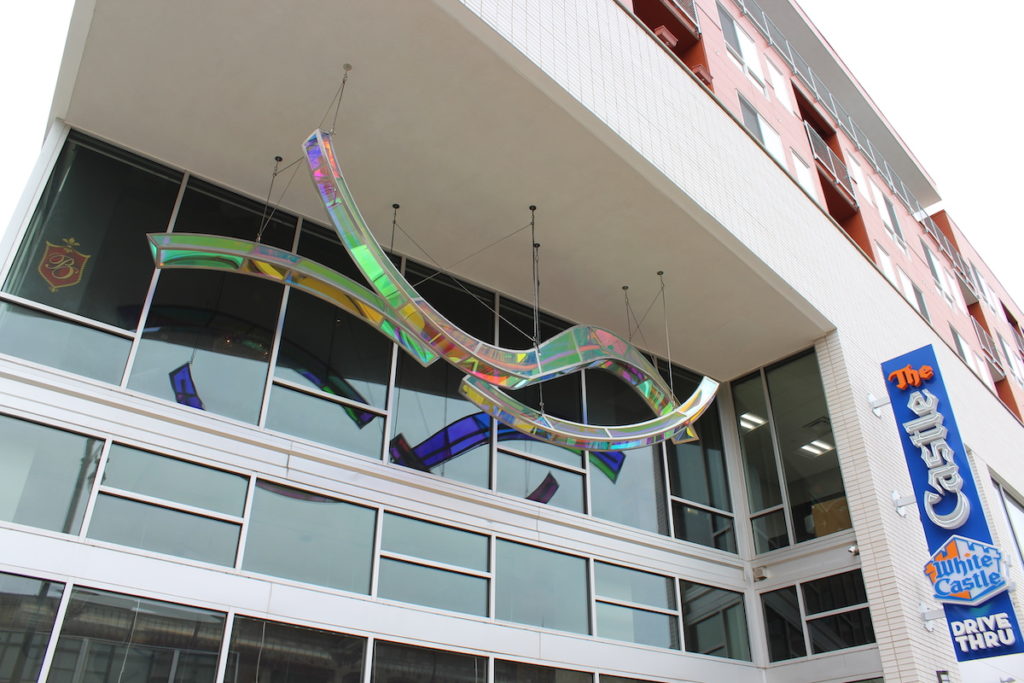 Located just north of Chase Bank, Chase Park is a pocket where visitors and locals alike can take a seat in a wrought iron chair and soak in the urban ambiance of High Street. Recessed between two columns and watching over the park is The Guardian, a colorful, playful sculpture by Russ Vogt that proudly symbolizes the organic creativity and brilliance of the Short North Arts District. Inset between the bank and Biscuit & Branch, four concrete and brick pillars form beautiful archways with the help of three stained glass panels that act as an entrance to Chase Park. The colorful space is a wonderful backdrop for the musicians who play during Gallery Hop and adds another artistic touch to the Short North Arts District. 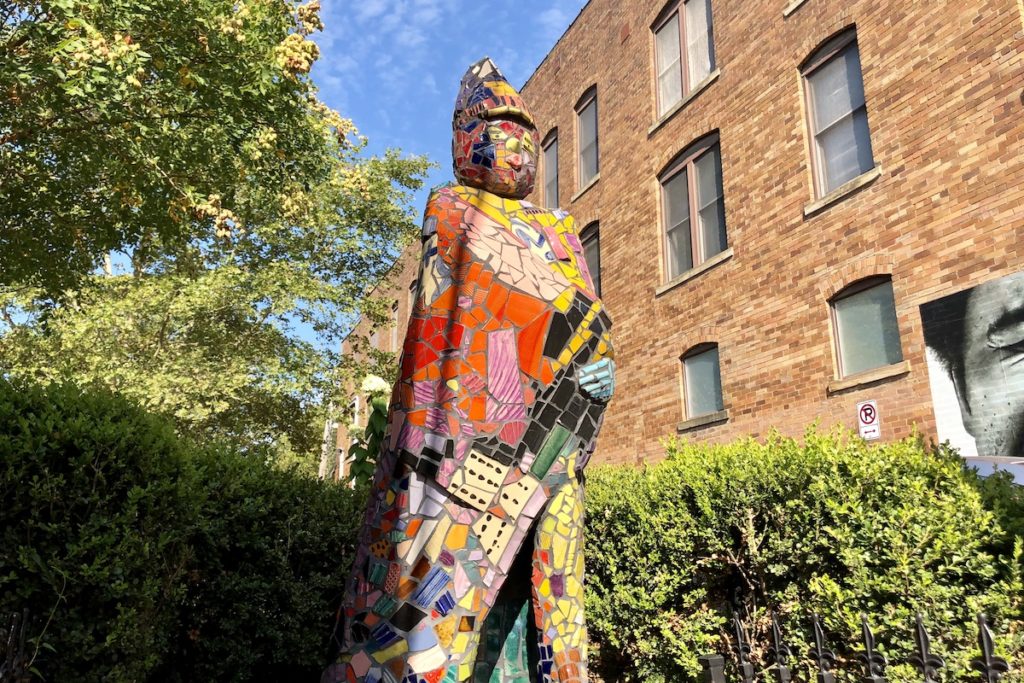 Just north of the Cap is the picturesque Poplar Park, the Short North Arts District’s largest pocket park with one of the most exquisite public sculptures in the city, Andrew Lidgus’ obelisk titled In Dreams Again. The name is a phrase from Ohio’s state song, “Beautiful Ohio,” while the design on the totem depicts three cardinals and a trillium, Ohio’s state bird and flower, and nature spirits – one receiving water to represent the name “Ohio,” based on the Iroquois word meaning “beautiful river,” and one receiving leaves to honor the natural history of Ohio. The sculpture stands amongst café tables, chairs, and planters in the park’s stone plaza. 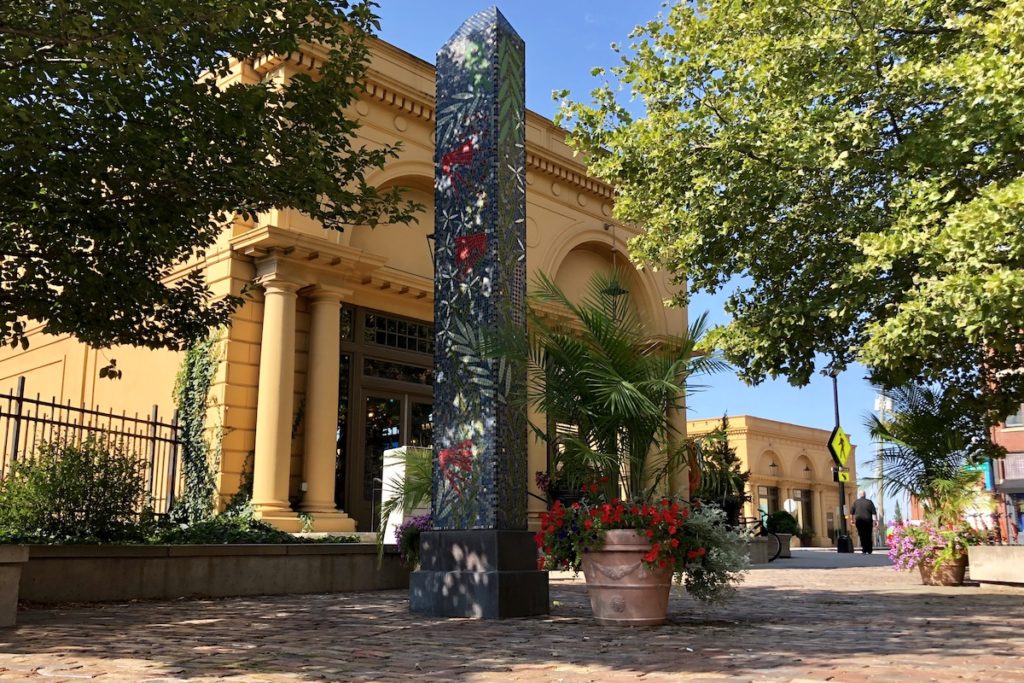 One of the most recognizable parts of the Short North Arts District is its 17 arches, which pay homage to erstwhile wooden arches first built in 1888, which is when Columbus became known as “Arch City.” Ohio was chosen to host the centennial celebration of the creation of the Northwest Territory since it was the first state carved out of the territory. The wooden arches were lit by gaslight and had been built to both light the streets and dazzle visitors. In 1896, the wood and gas was replaced with steel and electric, but in 1916 the arches were torn down entirely and replaced by light posts. In 2002, almost 100 years later, 17 steel arches were reinstalled on High Street from Goodale to Fifth Avenue and are a hallmark of the Short North Arts District. The individually-programmable lights, which use LED technology, create a bright rainbow along the mile stretch of High Street that is the District. 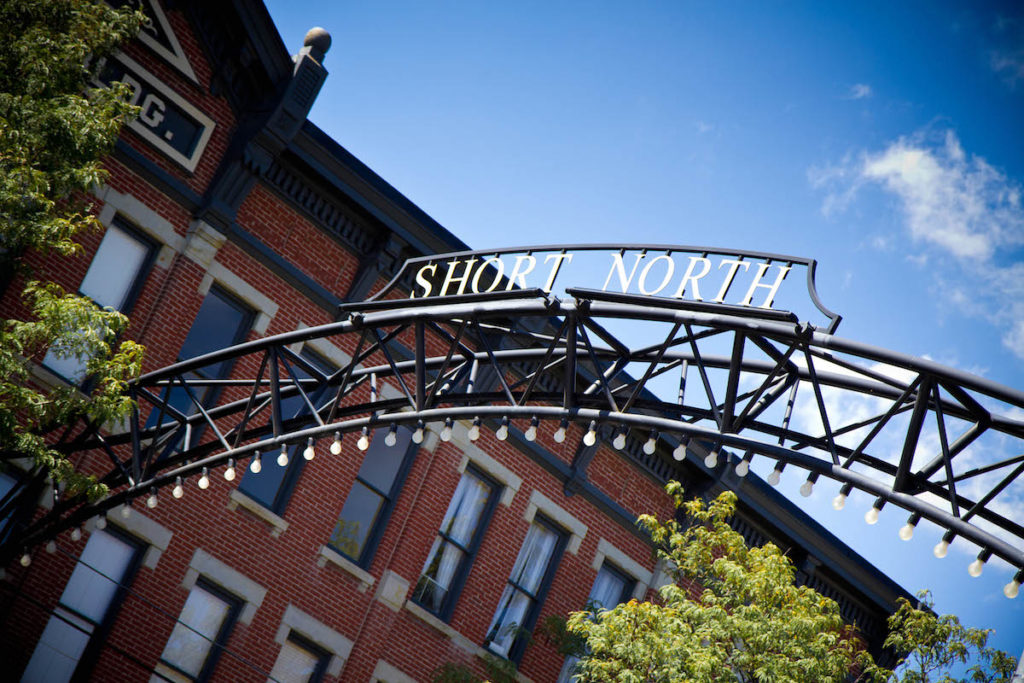 ArtPaths is an art walkway program that features 23 unique artworks created by Columbus College of Art & Design students on over 400 construction barricades that line streets throughout the Short North Arts District. As the barriers will move virtually daily as a part of the City of Columbus’ High Street Streetscape Improvements Project, the artworks were created so that no matter how the barriers are shifted or configured, the artwork will be seen and cohesive story will be told. Learn more about ArtPaths here. ArtPaths is made possible in part by state tax dollars allocated by the Ohio Legislature to the Ohio Arts Council (OAC). The OAC is a state agency that funds and supports quality arts experiences to strengthen Ohio communities culturally, educationally, and economically. 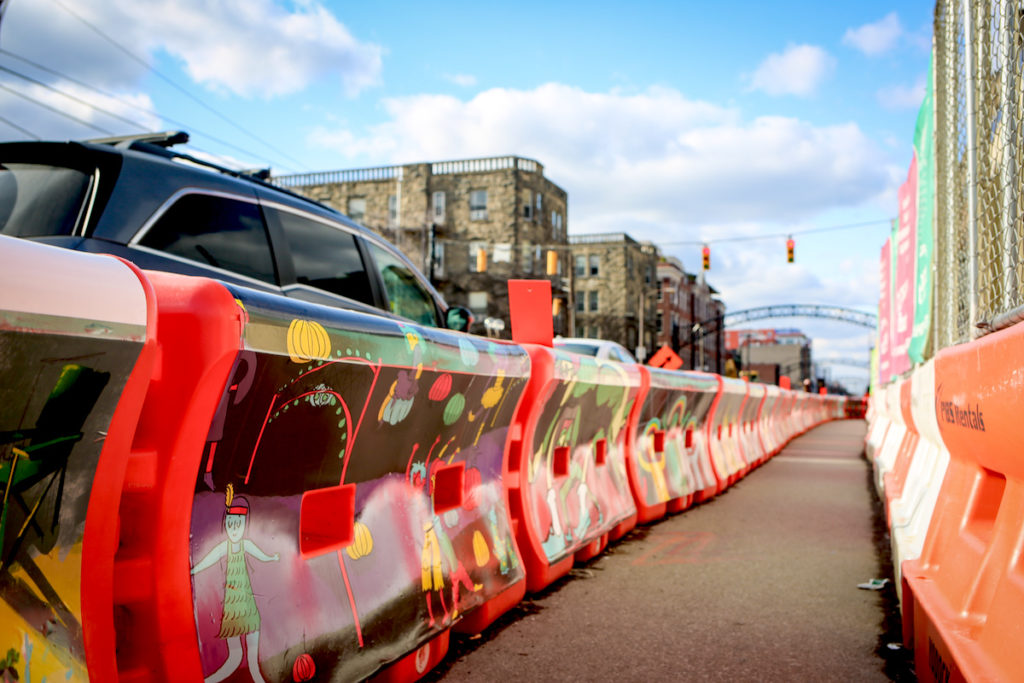 ArtPaths is made possible with partnerships and support from the following:

The mural pictured at the top of this page is Short North Gothic by Steve Galgas and Mike Altman. 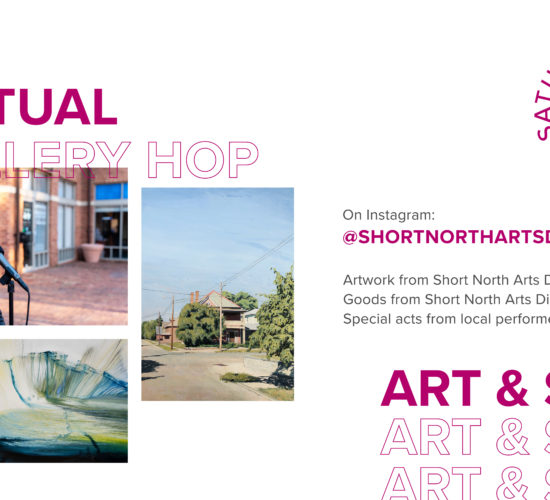 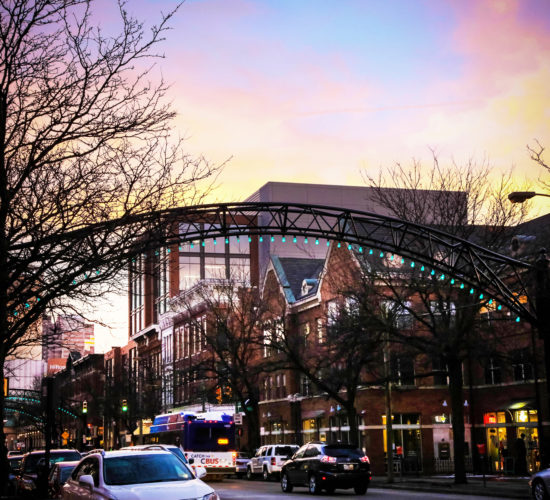 How to Support the Short North Arts District During COVID-19 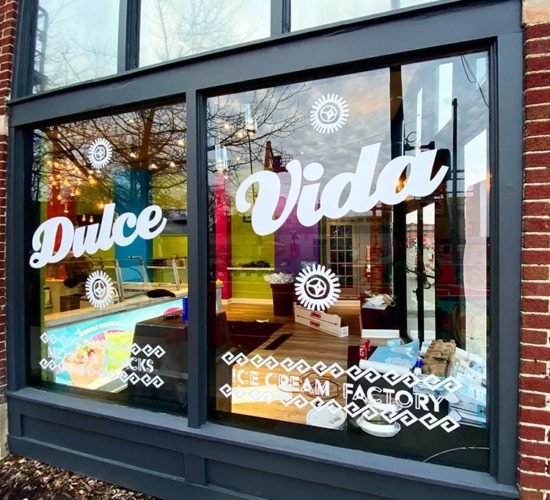