The Short North Alliance and 13 partner galleries and art institutions, with the support of the the Greater Columbus Arts Council, present the fourth rendition of the highly popular Short North Mural Series titled Six in the Short North. This year’s series is in partnership with nationally acclaimed and Columbus-based author Larry Smith to create original artworks or curate a selection of existing artworks which depict the artists’ own original six word stories about Columbus.

The murals are installed on the exterior brick facades of 13 buildings along High Street in the Short North Arts District. They consist of high resolution images of art works that are printed on vinyl and heat-adhered to buildings. The process results in a work of art that looks painted on the building.

SIX IN THE SHORT NORTH MURALS 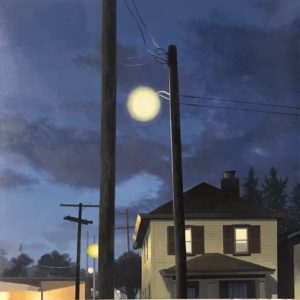 Christopher Burk was inspired by not only the color harmonies occurring in this scene, but also that of the lighting and, composition. The subjects emphasize the routine within the landscape; the symphony that is happening in the distinctive forms created from the sweeping utility lines that are falling upon the backdrop of a dramatically painted evening sky, and how they interact with the pinnacles of homes, treetops, and telephone poles.

Christopher Burk finds inspiration in the urban neighborhoods he calls home. Burk is constantly looking to illustrate something new, something most people would walk past without a second glance. He finds beauty in the mundane such as rooftops, water towers, and utility lines. 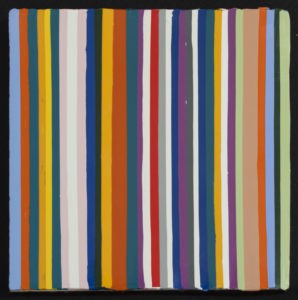 Faur was born in 1968 in New York City and moved throughout his childhood, from Chicago to Los Angeles to Sacramento. Making art was his constant, “the thing I always kept for myself.” After serving in the Army, he earned a degree in physics from California State University, Northridge, then taught physics and math at an L.A. middle school while exhibiting his oil paintings on the side. In 2000 he settled in Granville, Ohio, where today he is on the faculty at Denison University. In 2008 he finished an MFA in visual art and new media through the Transart Institute, a program based in Austria and New York.

With a BFA from Columbus College of Art & Design and an MFA from The Ohio State University, Denise Romecki taught ceramics and sculpture full time for the Columbus Recreation & Parks Department. She continues teaching part time at the Cultural Arts Center. Her works have been exhibited at Studios on High Gallery, one of the first galleries to open in the Short North. Additionally, she has shown her work through the Dublin Arts Council, the “Best of” exhibition sponsored by the Ohio Designer Craftsmen, the Franklin Park Conservatory, the Ohio Craft Museum, The American Museum of Ceramic Art, Glass Growers Gallery, Seaside Art Gallery, and the Zanesville Museum of Art. Denise’s sculptures can be found in museums, businesses, private collections throughout the U.S., and more recently in Tokyo, Japan. Growing Green is a ceramic mural depicting the vitality of a young tree appearing to lift the city as it grows – a metaphor for the environment that Columbus is working to create – that force of urban energy and growth, while simultaneously balancing and nurturing a green environment.

A Silhouette of Streets Delivers Him 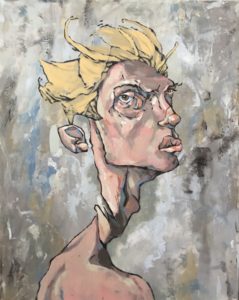 Six Word Story:
A Silhouette of Streets Delivers Him

Joey Monsoon is a self-taught figurative artist who lives in Columbus, Ohio. The characters he depicts in his paintings show weariness from the toil of life, yet a will to endure the struggle. His signature figures gaze out from his paintings engaging the viewer with dynamism. Their assertive eyes shift the paradigm of viewer and subject. The relationship is mutual and it is Monsoon’s hope that the viewer feels this returned gaze and in turn absorbs the strength of the figures he depicts. In his own words: “My figures and portraits hover somewhere between reality and myth. Their worldly weariness is revealed through a dream-like lens. They are not so much portraits of people as they are portraits of emotional triumphs and failures. We don’t always know their stories, yet in our gut we know how they feel.” 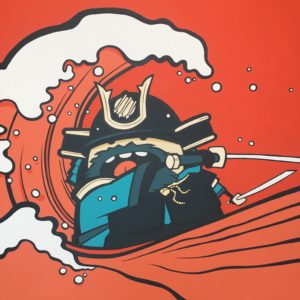 Six Word Story:
Blue Within A Sea of Red

Adam Brouillette is an artist, designer, and community organizer working out of his studio at Blockfort. His artistic style features a series of cartoon characters that are narrative in nature and rely heavily on cultural influences to tell their story.

Blue Within A Sea of Red examines the current political climate of the country and Columbus’s place in the discussion, through a cartoon magnifying glass. The samurai fights against the onslaught of shifting and merciless waves, protected only by his principle and dedication to a noble cause. 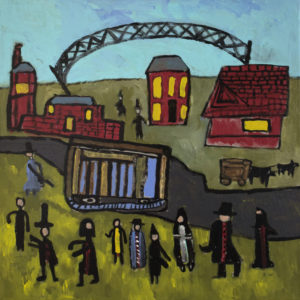 Doug Gantt is a painter with a plan. His prolific body of work centers on several themes that are continually revisited. His thoughtful creations are often inspired by classic works or art or by historical events. Doug’s figures often dominate his compositions and are surrounded by complex settings. For his piece, Trolley Bells, Doug portrays his vision of the “old Short North,” during the days where Columbus was graced by elegant street cars. 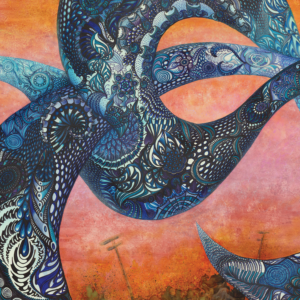 Six Word Story:
Columbus, My Diamond In the Rough

As a multidisciplinary artist, Julia Hamilton enjoys creating mixed media artwork and digital artwork with equal passion. She lives and works in her hometown of Columbus, Ohio. Her style is an intriguing variation of Art Nouveau. Her inspiration comes from the cosmos, science, nature, and synesthesia.

“McKinley Murmuration” was inspired by a murmuration of starlings flying over the junk yards and railroad tracks along McKinley Avenue in Columbus’s west side. The contrast between the grungy landscape and the graceful flock of birds was worth capturing in a mixed media painting. 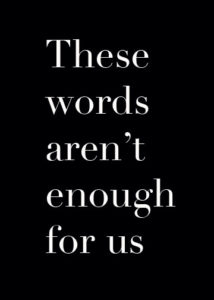 Six Word Story:
These words aren’t enough for us

David Skeens is a creative writer living in Columbus, Ohio. His work, a blend of poetry and design, appears at Le Meridien Columbus, The Joseph Hotel in the Short North, Joseph Editions Gallery, and the future Joseph Hotel in Nashville, slated to open in 2019. He is currently at work on a new series titled “Hagiography: Saints Borrowed and Blue.” By day, he is a copy director for L Brands.

In his mural These Words Aren’t Enough For Us, David Skeens uses six words to ponder the limitations of language and a struggle for intimacy.

Aminah Robinson’s Passing through Logtown, Georgia is what the artist referred to an a “rag painting,” a multi-panel work on paper that includes fabric and buttons. Fourteen figures are depicted in a format that seems to have been inspired by the classical friezes of antiquity. Themba, Robinson’s great aunt, wears a mask and occupies the right half of the composition. The four figures to her right may be interpreted as representing her African past, while the figures to her left their North American counterparts. Themba came to Columbus by means of Logtown, Georgia, and, along with many other individuals of African descent, escaped to the North or arrived here via the Great Migration.

Born in 1940, Robinson was raised in Columbus, Ohio, in the close-knit community of Poindexter Village. She received her formal art training at the Columbus Art School (now the Columbus College of Art and Design) and was awarded the prestigious MacArthur Foundation Fellows grant in 2004. 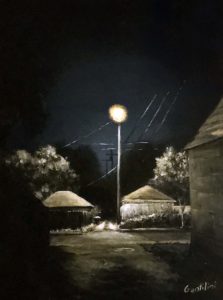 Six Word Story:
Tired. But Wiser For The Time

David Gentilini works for The Schumacher Gallery at Capital University, where he has served as curator, museum registrar, preparator, event coordinator, and community liaison since 2000. From 2000 to 2010, Gentilini was also the Director of MadLab Gallery in downtown Columbus, where he oversaw all facets of the gallery space. Between The Schumacher Gallery, MadLab, and other exhibits along the way, he has had his fingerprints on more than 600 exhibits in the last 12 years. Gentilini holds a Master of Arts degree from the Union Institute and University as well as a Bachelor of Fine Arts degree from Capital University. 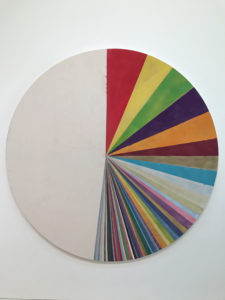 Tim Rietenbach lives and works in Columbus Ohio, currently a Professor of Fine Arts at Columbus College of Art and Design and represented exclusively by Angela Meleca Gallery. 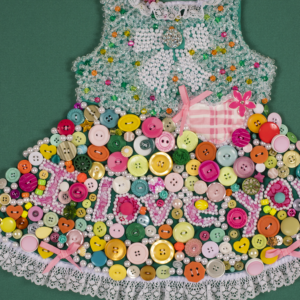 Her inspiration to sew came from her grandmother, Ida. Aminah Robinson was also an inspiration for Rosen, whose work and friendship she so admired.

Her trademark heart represents her love for her grandmother, her mother, daughter, daughter-in-laws, sisters, granddaughters, and all the special women in her life. Each dress incorporates special memories and subtle messages throughout. 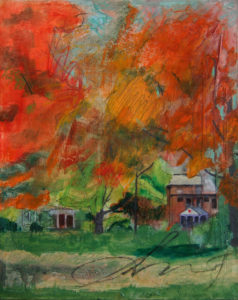 Michael Secrest is a Columbus artist, living in Italian Village in the Short North. He received his BFA in painting from The Ohio State University in 1972. Originally from eastern Ohio, Michael came to Columbus for university and stayed, working at OSU in physical facilities and then as a union steward until retirement. In 1980 he, and his wife Maria Galloway, opened pm gallery – now the oldest gallery in the Short North Arts District. He continues to paint and this image is from his latest series on Goodale Park. He is drawn to the colors of Fall and the saturated colors of Spring. His abstract paintings often use the same palette and textures.

This is Secrest’s second mural, his first being a fall painting of Dawes Arboretum in the inaugural Short North mural series.