The Short North Alliance and 19 partner galleries and art institutions, with the support of the the Greater Columbus Arts Council and the Short North Foundation, launched the third rendition of the highly popular Short North Mural Series. The exhibition, titled BLANK SPACES, was installed September 10, 2015, in the Short North Arts District.

The exhibition was curated by Tyler Cann, Curator of Contemporary Art at the Columbus Museum of Art.

The murals were installed on the exterior brick facades of 19 buildings along High Street in the Short North Arts District. They consisted of high resolution images of art works printed on vinyl and heat-adhered to buildings. The process resulted in a work of art that looked painted on the building.

Its name, BLANK SPACES, came from the idea that these murals temporarily occupied otherwise blank brick walls in the Short North Arts District. The murals were designed to be photographed and enjoyed for a limited time, until the next series was installed. Click here to download the BLANK SPACES Map. 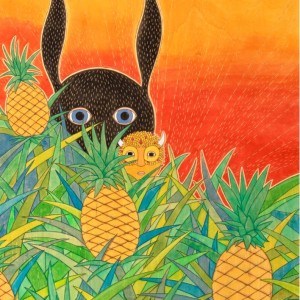 Ashley D. Pierce is a self-taught mixed media artist born and residing in Columbus Ohio. The subject matter of her work is drawn from her personal experiences, emotions and people in her life. She regards the majority of her work as self-portraits. When contemplating subject matter for a piece that would be shown publicly,  Pierce wanted to incorporate pineapples into the work, a symbol of welcoming in many cultures, as well as introducing symbols she believes reflects herself. Her unique style allows for viewers to create their own dialogues with her artworks. 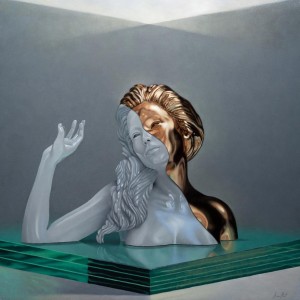 Brian Port enjoys allowing the viewer to interpret his work in their own way, a practice he believes may be more interesting than simply reading an explanation. His work more and more tends to reflect an element of riddle rather than exposition, providing the time and vehicle for pondering. In Daughter of Midas, we see the daughter of King Midas who has been touched by him and is either at the moment of turning to gold or being healed. He intended this dualism to bring the viewer to a decision point. The painting can be a warning to us or a celebration of healing, or both at once. 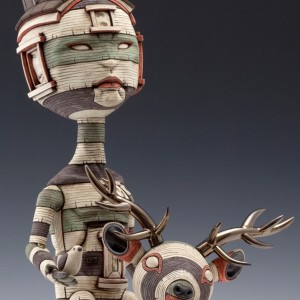 Calvin Ma received his BA in industrial arts from San Francisco State University in 2007, and his MFA in sculpture from the Academy of Art University in 2012. He has been featured in several publications, including “500 Figures in Clay.”  His work is in many private collections, and has been shown in gallery and museum exhibitions across the United States. The artist currently lives and works in San Francisco. Ma utilizes the action figure in his sculptural work to explore personal issues and struggles with social anxiety. He has expressed difficulties in interacting with the social environment, turning to toys as a mechanism of coping with the world around him. This childlike sense of exploration and storytelling has been a force behind his work and journey as an artist. 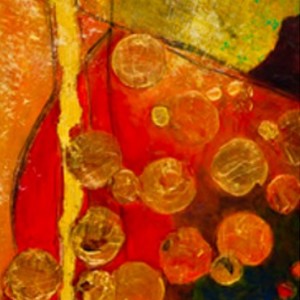 Ruth Ann Mitchell draws the inspiration for Awakenings from both the curiosity of her grandchildren and personal travels. She parallels the growth and first adventures of children with her forgotten experiences and feelings. These ‘awakenings’ are a source of hope, joy and a continuation of spirit.

Beginning her career as an artist eighteen years ago, Michell’s work now belongs in private collection throughout the nation. 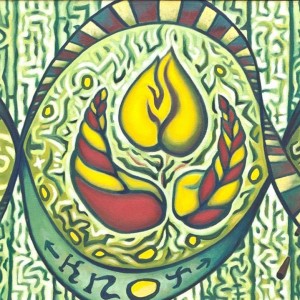 Self-taught, non-academic artist Charles Wince migrated to the Columbus New Wave music/art scene from rural Ohio in 1983. He began hanging his artwork in bars, clothing stores, and writing and illustrating articles in local music fanzines. This led to his participation in the small number of independent galleries around the Ohio State University Campus area. In 1985 Wince was “discovered” by Whitney Museum of Modern Art curator Barbara Haskel who had come to O.S.U. to curate an exhibit. From that point on he began to be acknowledged in the academic art world and the media, and a growing interest started to build around both him and his work. 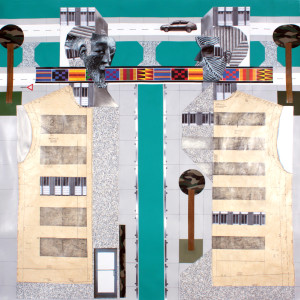 Derrick Adams’ strong design sense makes for complex structured assemblages that draw on urban plans and architecture frameworks, fashion, and pop culture. In Cultural Center Joined by Public Art Commission bodies, trees, roads, and buildings overlap. Patterns and bold colors create a graphic organization of people and places that is both pleasantly lively and energetically (perhaps troublingly) fragmented.
Adams’ practice includes painting, sculpture, performance art, and collage, which are all deeply rooted in ideas about the African American experience, the shape of that identity and the stereotypes that persist. Conceptual themes are translated into a hybrid style that has roots as much in Matisse’s cut outs as in Romare Bearden’s collages or the glossy world of MTV graphics. 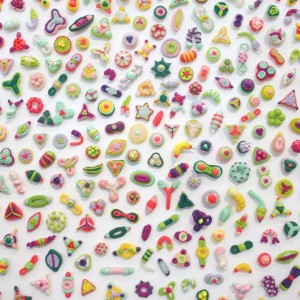 “Diatoms” is an abstract representation of real Diatoms found in the natural world. Diatoms are single celled alga with a silica skeleton. The bi- or tri-symmetrical skeletons inspire the basic formation of each miniature diatom that Harper sculpts.  She finds these abstract, fundamental geometric forms and textures inspiring because they’re alien or unknown.  While looking otherworldly, they still look biological and familiar.  As they are made, one inspires the other, making up new alterations and variations as they are created.  The details as well as forms become an evolutionary process. All the diatoms are related, inspiring each other yet still maintaining their individuality. 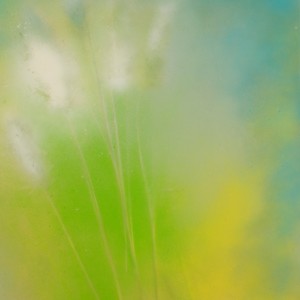 Danielle Poling is a fine art painter and more recently a public muralist. Her accomplishments include the Sunwall Moonwall underpass murals at Cooke Road in Clintonville as well as being the featured speaker for the 2014 Arts and Humanities Month at the Ohio Statehouse. Her paintings are soulful, emotional and bold. They vary in representation, some completely abstract, while others use metaphors or symbolism. Poling’s use of florals often metaphorizes personal growth and development rather than simply employing traditional aesthetics.
Her paintings have been awarded Leader’s Awards at the Ohio State University two years in a row. Danielle studied Fine Art on international exchange in Australia and studied Design and Art Education at the Ohio State University. 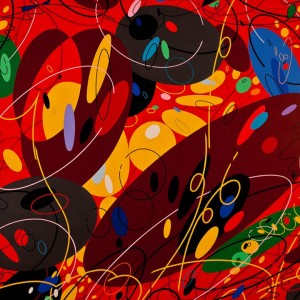 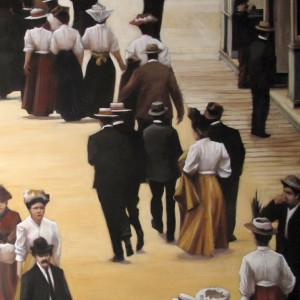 The emotion of a single moment in time is what motivates Michael Guinane to paint. Whether it be a still and quiet moment of an individual, or capturing the total environment created by multiple figures in one place, his work tries to allow you to see deeper into the subject. Guinane is trying to create an atmosphere for the viewer to feel. Whether it be a moment in history or the artist’s personal experience, a quiet winter night in the park or a busy city street, these works try to capture the feeling and mood one gets from being in a certain place or time.
Originally from Milwaukee, Wisconsin, Michael Guinane moved to Columbus in 1996 to attend the Columbus College of Art and Design. He graduated with a B.F.A majoring in Illustration in 2000. 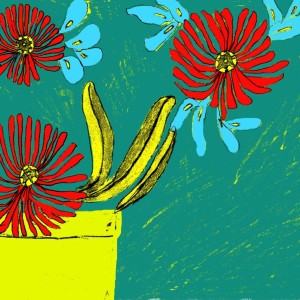 Teresa Cornelius is passionate about art – she has natural artistic intuition which is evident in all of her art work. Attention to detail makes her pieces unique and one of a kind.  She enjoys working in different mediums especially painting. Cornelius is involved in the community and considers herself a people person. In her spare time she is an avid reader, loves bowling and of course art projects. She has a dog named Bentley, and her personality and enthusiasm are both infectious and endearing. 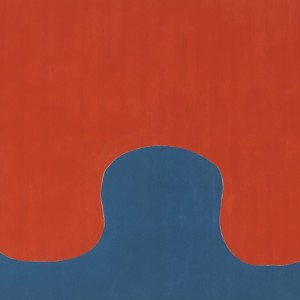 Feeley’s paintings and sculptures are characterized by bright colors and undulating forms that are often poised between representation and abstraction. Feeley held an influential position as a professor at Bennington College in Vermont, where he helped make the school an ambitious cultural outpost in the 1950s and sixties. He organized or co-organized important early exhibitions of Jackson Pollock, David Smith, and Barnett Newman, and was himself honored with a 1968 memorial retrospective at the Solomon S. Guggenheim Museum in New York. 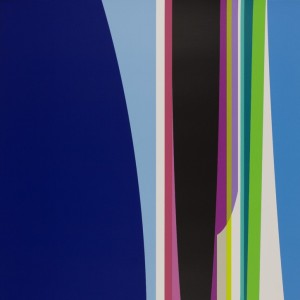 Dion Johnson paints superficial wonders. His large canvases are full of animated shapes – swathes of saturated hues that fall down the canvas or zip across. The result is a feast for the eyes. Landscape and place drive Johnson’s work, taking cues from both the Washington Color School and California’s hard edge paintings. Blues, pinks, greens, and yellows drop, hang, and bulge. Black and white forms interrupt and separate the colors. Some of the shapes are marked by an outline; others overlap in transparent sheaths. The rhythm of the canvas is busy but not cluttered. 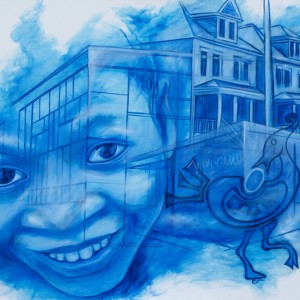 Omarthan Clarke is an MA Student in Arts Administration, Education and Policy at The Ohio State University and active visual artist who worked on the Weinland Park Billboard Project team. While earning his MA in Arts Policy and Administration, Omar maintains positions as a Graduate Teaching Associate and the Community Development Director at Millworks Art Studios. His research and artwork is geared toward cultural exchange and community empowerment through the bridge of critical arts education. 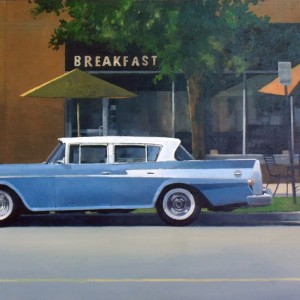 Paul Hamilton holds a Fine Arts Degree from the Columbus College of Art and Design, and is a member of both the Columbus Art League and the American Impressionist Society. His work has been featured in American Artist magazine and County Living. Paul’s résumé includes a long list of gallery and museum shows for his painting, sculpture and installation mediums.

This past November, Hamilton’s Blue Beautiful Skies, a painting consisting of 96 individual panels, was dedicated at The James Cancer Hospital at the Wexner Medical Center on the campus of The Ohio State University. 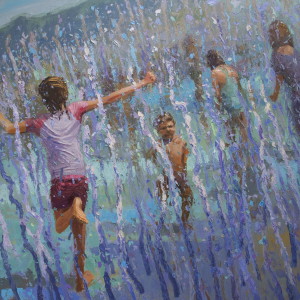 American artist Rod Hayslip has exhibited nationally and internationally. Hayslip’s muse is the visual richness of people and places. The art created is often imbued with a celebration of life — both the everyday and the extraordinary. The finest oil paints are used, applied to canvas primarily using metal tools of various shapes and sizes. The paint is slathered, scraped, or smeared, leaving a visceral record of artistic passion. The result is the sharing of a deeply personal experience. 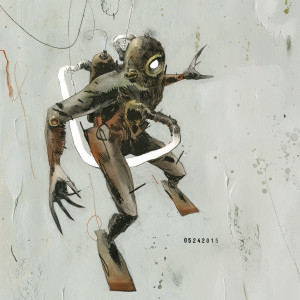 “Boundless dimensions surround us. Acknowledge the depths of your imagination and allow yourself to journey into the distance.”

Jeremy Sorrell was born in Columbus, Ohio in 1982. He completed his BFA in Industrial Design from the Columbus College of Art & Design in 2004. He works predominantly in ink, watercolor and acrylic paint on various papers or boards. Robots, female portraits and vintage industrial technology are prominent themes in his work. He lives and works in Columbus, Ohio. 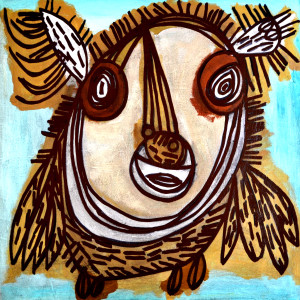 Wallace Peck was born in 1963 and spent most of his childhood with his family in Franklinton, Ohio. It was there that he discovered Gladden Community House, a community settlement facility where they provided him with drawing materials and a space to create. The Gladden family introduced Wallace to Columbus Center for Human Services where he was provided with a place to live and the opportunity to expand his artistic skills at Open Door Art Studio, which provides art education and art services to individuals with developmental disabilities. He has had many amazing exhibition opportunities including the Columbus Arts Festival, Lindsay Gallery, and the Ohio Governor’s Residence. 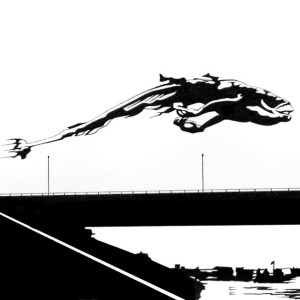 Simione is a Columbus-based toy designer and artist who has worked on some of the biggest toy lines of the last 15 years including Star Wars, Spiderman, Hello Kitty, Aliens and Marvel Superheroes. Simione has also created designs for Big Bang Theory, Walking Dead, Godzilla, and Nightmare Before Christmas. He counts Hasbro, Sanrio and Diamond Select among his clients.

Not Human – Creatures in Film is a multimedia exploration of cinema’s scariest and most memorable villains, creatures and haunts, including works inspired by Pan’s Labyrinth, Friday the 13th, Alien and Jaws.