The Short North Alliance and 10 partner galleries and art institutions, with the support of the Experience Columbus, present the sixth rendition of the highly popular Short North Temporary Mural Series titled Unconventional: A community-curated celebration of our unconventional city. 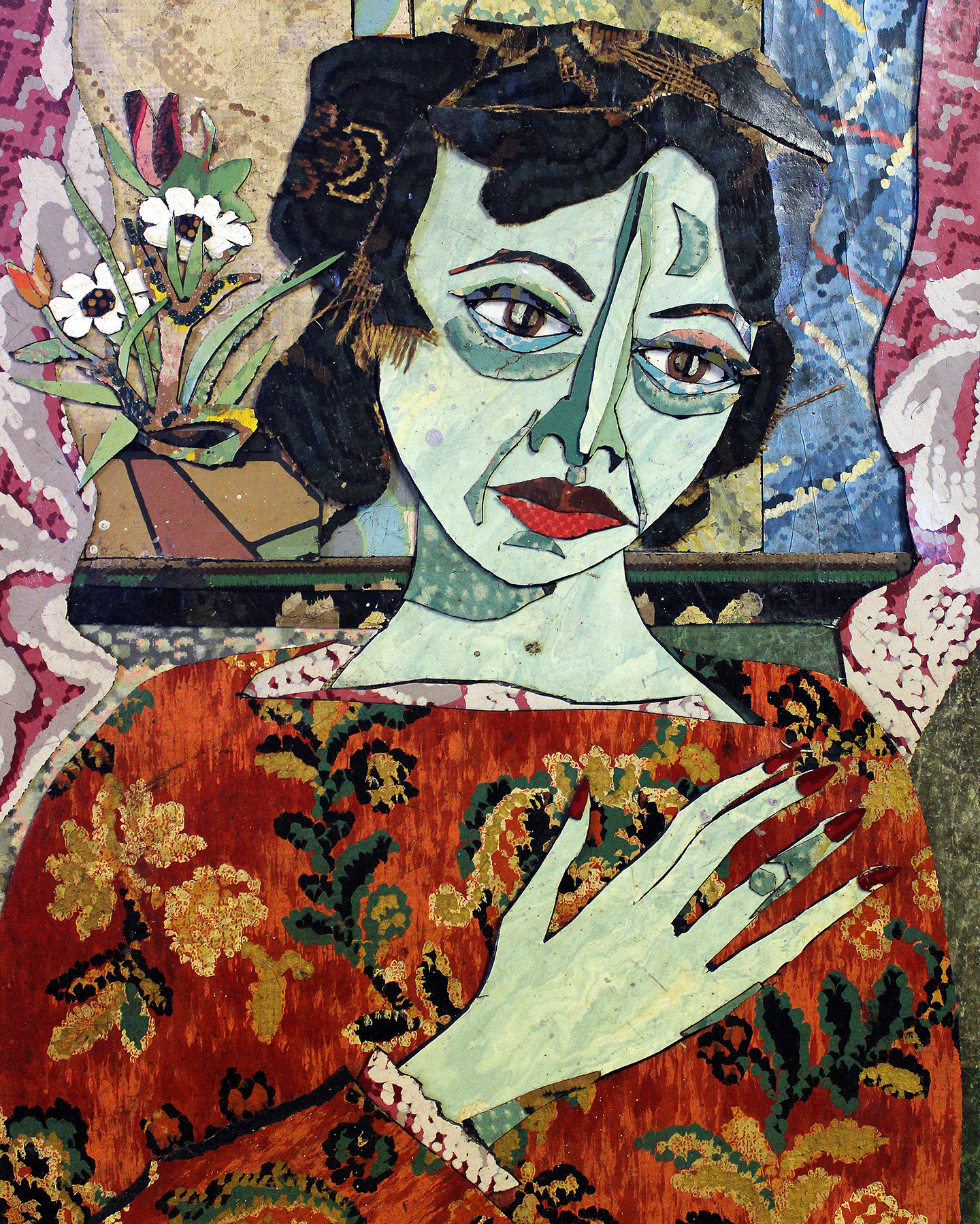 Bill Miller is a collage artist who has been using vintage linoleum flooring as his medium for almost 20 years. Born in Cleveland, Miller currently lives outside of Woodstock, New York. Linoleum was the ultimate interior medium, present in all aspects of 20th century life from Grandma’s kitchen to the corner drug store and neighborhood school. Miller’s innovative work is recognized for pictorial assemblages that rely only on the flooring’s found surface, with no added paint, to render his subjects. Miller’s images range from bucolic landscapes to surrealistic, fiercely political pieces that draw on iconic news and pop culture images that have informed society’s common memory. His unexpected use of familiar patterns taps into the medium’s nostalgic qualities, imparting a sense of personal history and rediscovery within each piece. Bill Miller has been profiled in the New York Times, New York Post, Chicago Tribune, Columbus Dispatch and on the National Geographic Channel. In addition to several shows at Lindsay Gallery his work has been shown in Chicago, New York, Austin, Los Angeles, Seattle, Washington DC and in Europe. In 2007 Miller was honored with a retrospective exhibit at the Pittsburgh Center for the Arts. In 2010, he was chosen to create the cover image for the Frank Zappa CD Congress Shall Make No Law, issued to mark the 25th anniversary of Zappa’s anti-censorship testimony on Capitol Hill to support artistic freedom of expression. 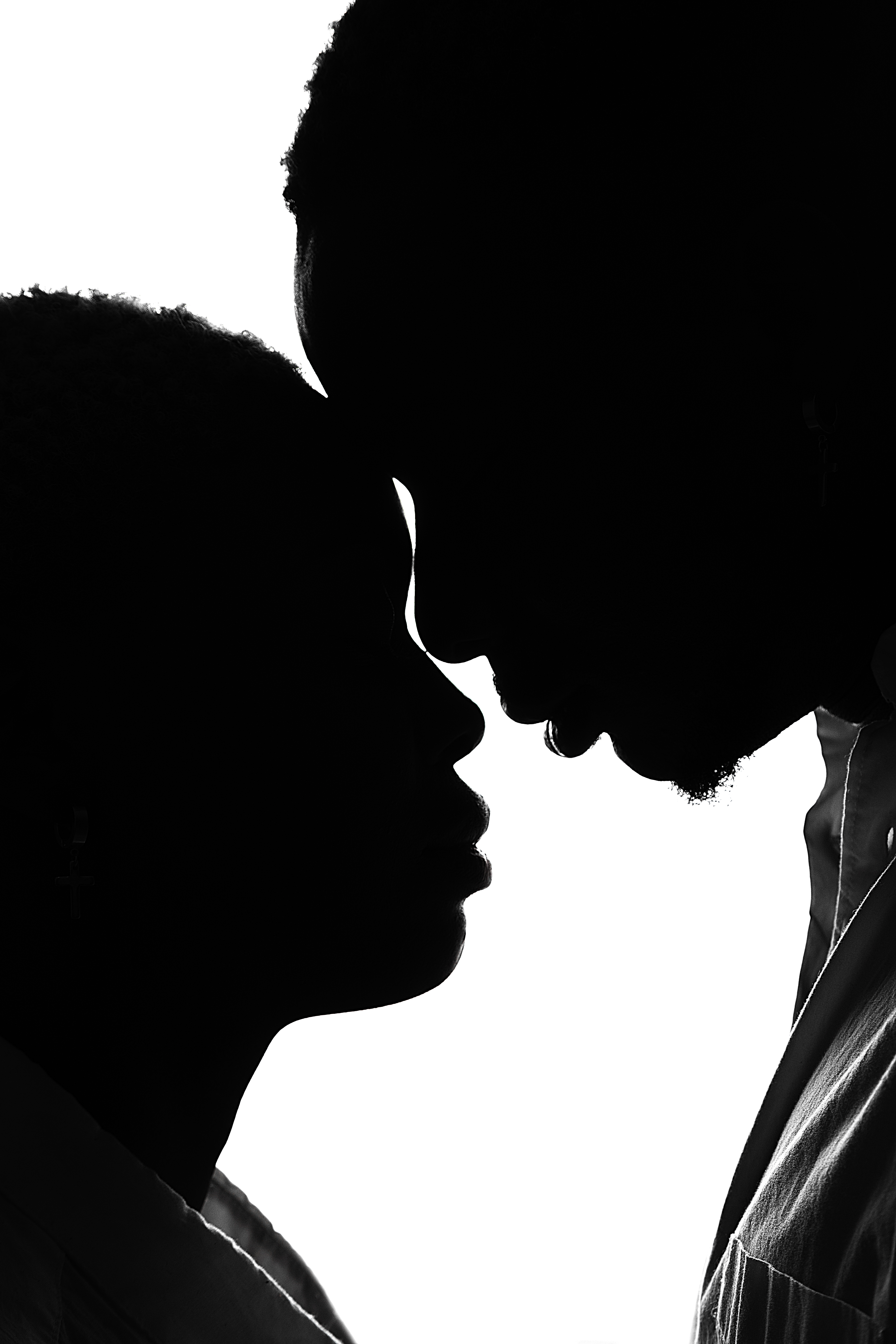 Edmund Boateng is a Columbus based self-taught artist specializing in photography, pencil drawing, and film making. He says: “Art has been a part of who I am; as a child, I discovered my love for creativity and often found myself passionately sketching images I found fascinating and writing down on paper concepts to explore. Growing up, in the city of Kumasi, Ghana, where I’m from, art was always all around me. With my father being a very talented shoe maker, and two uncles, one being an architect and the other a painter – I was surrounded by their diverse creativity everyday, which inspired me to follow the family talent. As I grew in my talent, I began to draw celebrities from Ghana and showing it to families and friends. I created  Deeper Connection to encapsulate the bond between two people who have love one for another. Without seeing the expression on their faces, you can feel the connection they have goes deeper than common superficial relationships that exist only on the surface. You feel the peace and support they give one another. You feel that no matter what comes their way, they will stand strong together. As their foreheads meet, they are no more parallel, but the two become one.” 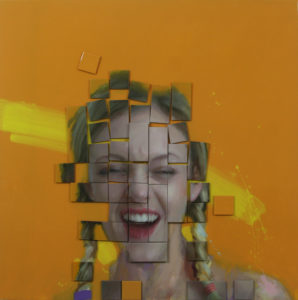 Yuri Darashkevich was born in Asipovichi, Belarus. He graduated from the Belarusian State Academy of the Arts in 1985. After graduating, he began a career in the illustration and graphic design field, painting in his spare time. After several successful solo shows in the early 90’s, he began to devote his full attention to creating art. Following this, he moved to Toronto Canada, and became an Elected member of the Society of Canadian Artists in 2009. In 2010, he moved to Florida and opened a second studio in Lake Worth. Currently, his artworks are exhibited in art galleries across the United States, Canada and Europe. He says: “This work is about the physical and emotional reactions that shape the fragile, unstable nature of the human consciousness.” In his work, Darashkevich attempts to recreate the path of intuition, giving us visual preferences and shapes that define what society considers “ideal.” His works are about visual perception and the ways in which human forms respond to the color, line, shape, texture or pattern. “I collect loose emotions and turn them into purposely-scattered elements of the image, then bring them back together to discover the definition of altered beauty, and hopefully bring it into new light.” 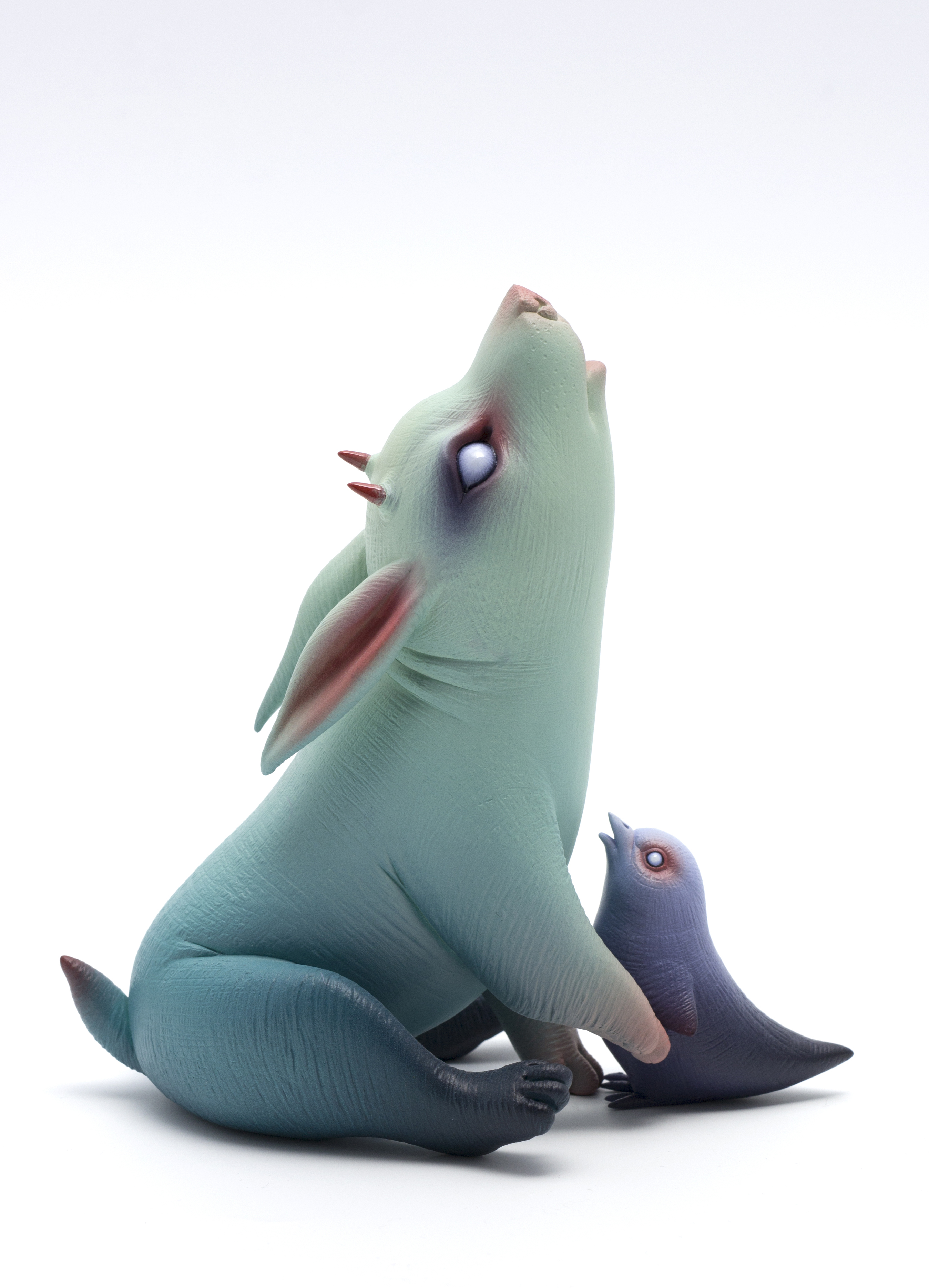 Erika Sanada is a California based artist who uses porcelain clay to create fascinating creatures in pristine detail. Combining influences from films, cartoons, and her own imagination, Erika’s artwork has been exhibited internationally and widely published in Hi-Fructose Magazine, Hey! Magazine, and Beautiful Bizarre Magazine. “Howl” shows two unlikely friends joining together and looking up at the same sky. Erika Sanada’s work talks about welcoming things that may seem hard or scary at first. Sometimes the most extraordinary possibilities start from unconventional combinations. 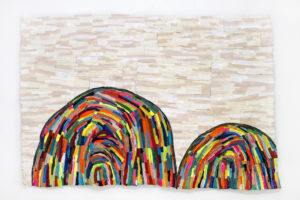 Andrea Myers received both her undergraduate and graduate degrees from the School of Art Institute of Chicago. She received her Bachelor’s in Print Media and her Master’s in Fiber and Material Studies. Within her artistic practice, Myers maintains an interest in exploring the space between the two-dimensional and three-dimensional, hybridizing painting, printmaking and sculpture. Mountain Sighed is a machine sewn textile collage, suggestive of landscapes, figures or maybe a hybrid of the two. Layers of color striation bring the attention of the viewer to the two hill-shaped forms, that could also read as two fingerprints, knees, heads or two halves of a circular form. 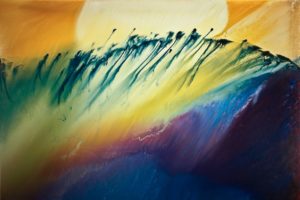 French born American artist Annette Poitau received her MFA with honors from the Ecole Nationale Supérieure des Arts Décoratifs in Paris. She also studied at the Cooper Union for the Advancement of Science and Art in New York City. After showing her work extensively in France, she moved to California, where she lived for 12 years before setting up her studio in Oberlin, Ohio. Annette’s paintings are displayed in private and public collections in the United States, throughout Europe, and in Japan. 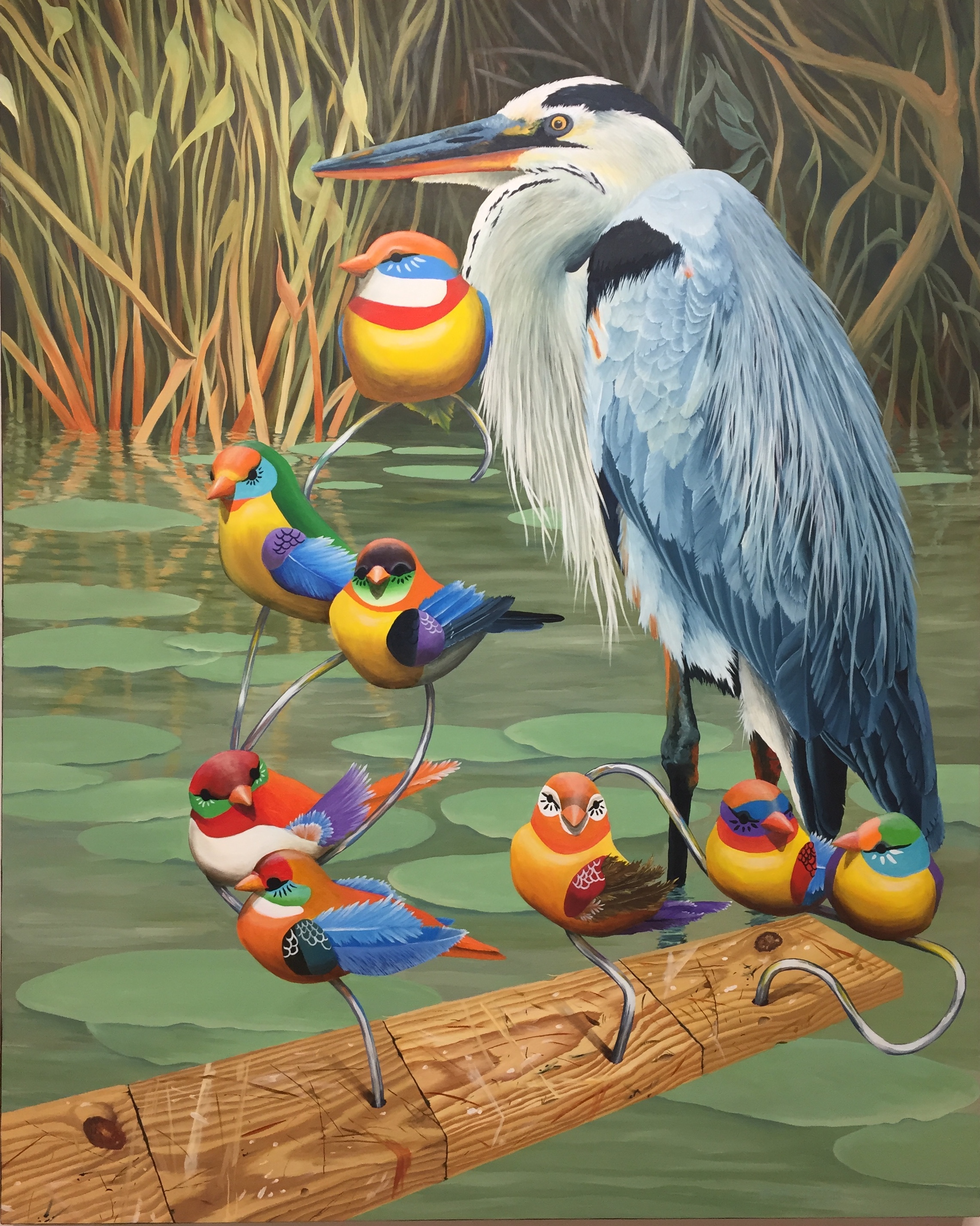 The observable world – the vastness of landscapes, the structure of a mountain, the feather pattern of bird’s wing, the play of light on translucent glass – is painter Bernard Palchick’s muse. He feels that painting from direct observation is an energizing process of comprehension, of being mesmerized, and of being possessed by the joy of looking and looking again. He says: “I have always relied on, and have taken great joy from the direct observation of nature and the celebration of beauty found in the smallest of details. Beyond shear joy, intense observation keeps my eye and mind fluent in the visual language.”

Ideas about myth and ritual serve as a core concept of the imagery in his paintings. The objects he chooses, along with the odd juxtapositions of those objects, are attempts to playfully/joyfully answer questions about the magic of the things – trees, rocks, string, marbles, animals, mountains, clouds. He feels that personal myths and rituals enable us to achieve comfort with and some control of the mysteries we discover in our lives. “I want these paintings to draw the observer into the world of the painting to discover the magical beauty in the details and to invent their own myths and rituals suggested by the imagery.”

Beverly Whiteside is a self-taught artist and retired Dance Education Specialist in the Columbus City Schools. She was chosen for a residency in the Ohio Governor’s Spotlight Program. She also was selected to participate in the Greater Columbus Arts Council Exchange Fellowship residency in Dresden, Germany.

She says: “Being strong and standing up for love gives us so much confidence in ourselves and in what we can accomplish together.” This piece reflects her thoughts concerning hope, respect and the courage to believe in the power of love. 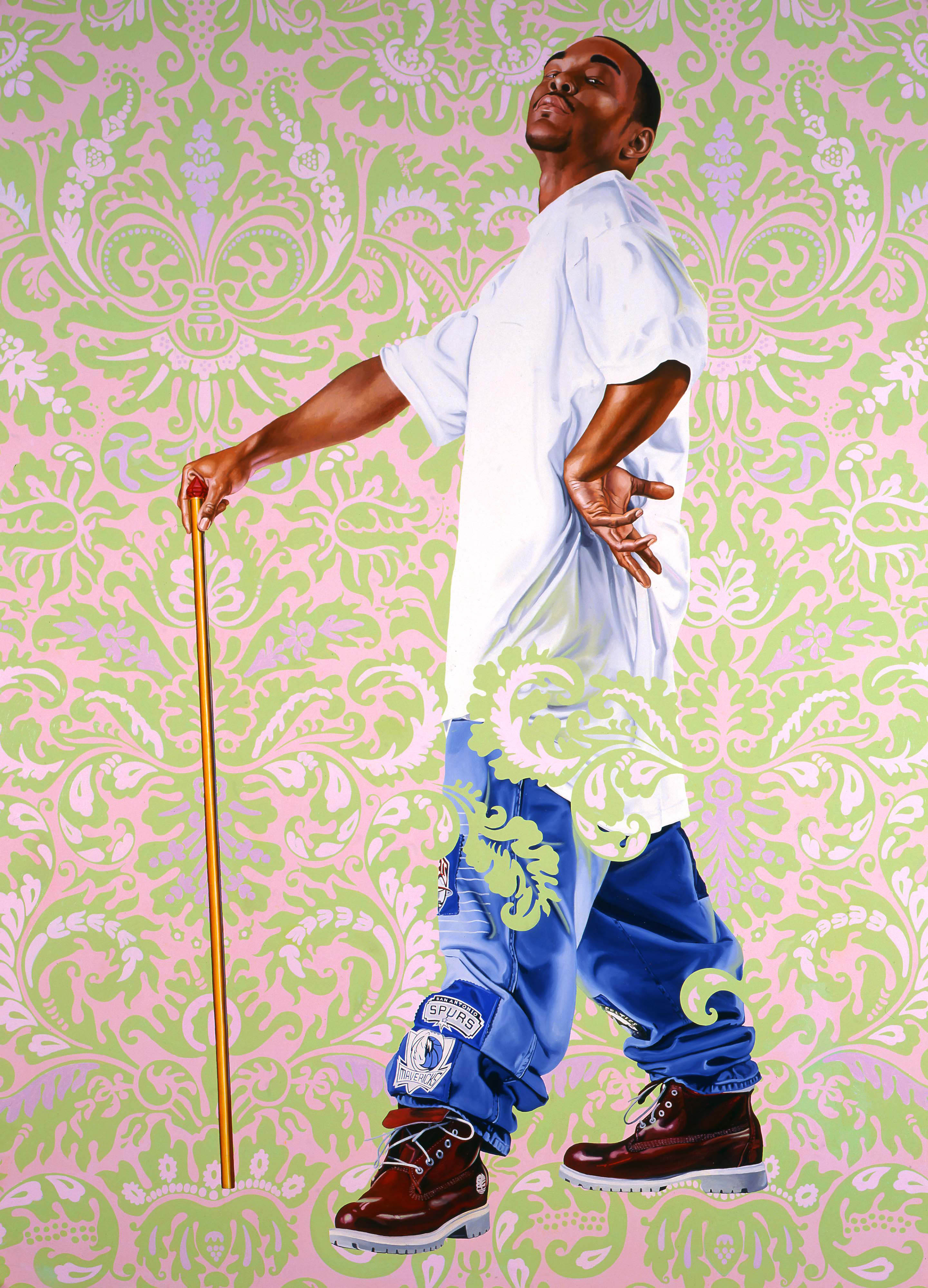 Los Angeles native and New York based visual artist Kehinde Wiley has firmly situated himself within art history’s portrait painting tradition. As a contemporary descendent of a long line of portraitists, including Reynolds, Gainsborough, Titian, Ingres, among others, Wiley, engages the signs and visual rhetoric of the heroic, powerful, majestic and the sublime in his representation of urban, black and brown men found throughout the world.

By applying the visual vocabulary and conventions of glorification, history, wealth and prestige to the subject matter drawn from the urban fabric, the subjects and stylistic references for his paintings are juxtaposed inversions of each other, forcing ambiguity and provocative perplexity to pervade his imagery.

Wiley’s larger-than-life figures disturb and interrupt tropes of portrait painting, often blurring the boundaries between traditional and contemporary modes of representation and the critical portrayal of masculinity and physicality as it pertains to the view of black and brown young men.

Initially, Wiley’s portraits were based on photographs taken of young men found on the streets of Harlem. As his practice grew, his eye led him toward an international view, including models found in urban landscapes throughout the world – such as Mumbai, Senegal, Dakar and Rio de Janeiro, among others – accumulating to a vast body of work called, “The World Stage.”

The models, dressed in their everyday clothing most of which are based on the notion of far-reaching Western ideals of style, are asked to assume poses found in paintings or sculptures representative of the history of their surroundings. This juxtaposition of the “old” inherited by the “new” – who often have no visual inheritance of which to speak – immediately provides a discourse that is at once visceral and cerebral in scope.

Without shying away from the complicated socio-political histories relevant to the world, Wiley’s figurative paintings and sculptures “quote historical sources and position young black men within the field of power.” His heroic paintings evoke a modern style instilling a unique and contemporary manner, awakening complex issues that many would prefer remain mute. 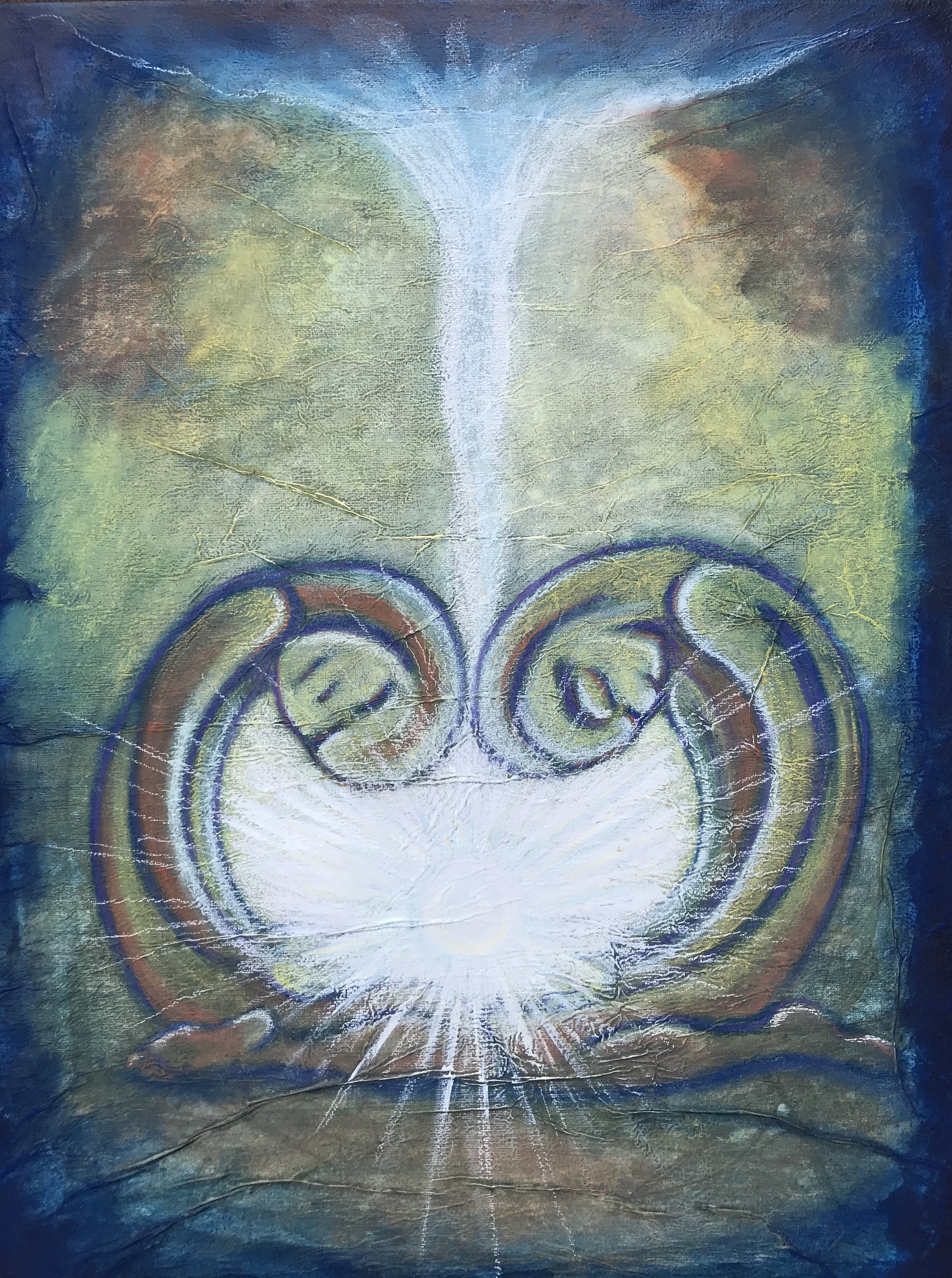 Reverence is about balancing male and female energies. It is about collaboration and spiritual union between Divine Feminine and Divine Masculine individually, as well as in the collective. It is about integration and fullness. It is about revering the work we are inspired to do and the meaning it brings to our lives.

Melissa Ayotte, MA, ATR-BC is a registered and board certified art therapist who works in the Columbus area. She received formal art training at Columbus College of Art and Design, a BA in Psychology from Ohio University, and an MA in Art Therapy from Saint Mary of the Woods College. She is inspired by intersections between the spiritual and the physical wonders of the human experience. It is in these moments one experiences intimacy of being and meaningful existence.

The mural pictured at the top of this page is Short North Gothic by Steve Galgas and Mike Altman.