Twenty-five years ago, Sharon Weiss was so charmed by a vacant space on Poplar Street that she jumped out of the car to get details from the For Rent sign, and the rest, as they say, is history. 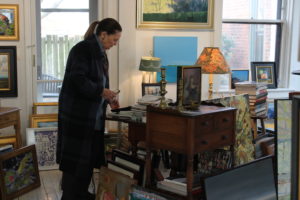 Weiss worked for years as a full time teacher of parenting classes and was only able to opened her storefront on the weekends. Eventually, the gallery moved to its current home on East Lincoln Street, and Weiss focused her full attention on her gallery to cultivate a haven for emerging local artists. Twenty-five years later, Weiss’ enthusiasm for showcasing art and its makers has only gotten stronger, as evidenced by her latest venture, 24 Lincoln Street Art Studios.

Weiss initially began testing the viability of the space at 24 Lincoln Street with a pop-up antique shop called FOUND on the first floor. Not long after, she had an idea for the second floor. After approaching property owner The Wood Companies with the idea of opening the Studios upstairs, they quickly shared her vision and were supportive.

The Studios are exactly what they sound like: studio space where artists, three to be exact, create and share their paintings with the public. Similar to her love of her initial space on Poplar Street, Weiss loved the antique charm of the house in which the Studios live, and its merits are undeniable; natural light streams in through the many large windows, the walls and floors covered in paintings in varying stages of completeness. We chatted with Weiss and two of the artists, Amy Adams and Lisa Parks Godfrey, about what this new space means to them and why they feel it is vital to share their work in this way. 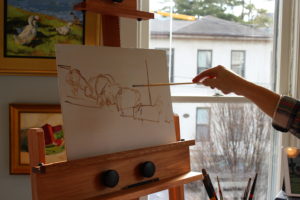 Adams, a Denver native, moved to Columbus about seven years ago with her husband and children and immediately sought to find the same sense of community she had with the Arts Students League of Denver. An established painter with a formal education in art, Adams quickly found what she was looking for in Weiss’ gallery. Now, with the Studios, her connection has only deepened because of the kindredness she feels with Parks Godfrey. “This was a tremendous opportunity to branch out, to come down into the city, to be in the heart of the Short North Arts District, and to have a painting friendship with someone who’s passionate about it,” Adams said.

Conversely, Parks Godfrey first began collecting art through Weiss’ encouragement, and then began painting about a year and a half ago under the tutelage of well-known local painter Michael McEwan. “When Sharon contacted me a couple months ago about the idea of this, I knew it was an opportunity I could not turn down; it was almost too good to be true,” she said. “There was so much anxiety, but now when I’m here, it’s like a home away from home and I want to paint all the time.” 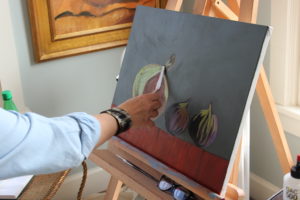 Weiss has such a good eye that the first painting of Parks Godfrey’s in which she expressed interest and hung in her gallery quickly sold to Nancy Cartwright – best known as the voice of Bart Simpson – who stopped by during her visit for a convention. Weiss’ motivation, as well as positive feedback from other artists, has given Parks Godfrey a boost of confidence.

One of the most remarkable aspects of the Studios is just how effectively they make art accessible, both because of the space itself and, most importantly, because of Weiss and the artists. “Art in and of itself is a starting point for connecting people,” said Adams. “I think it’s a privilege to be an artist, because if you can make a connection with somebody through your work that’s meaningful to them, [that is] ultimately the goal. Being here is an opportunity for us to make an immediate connection with people.” 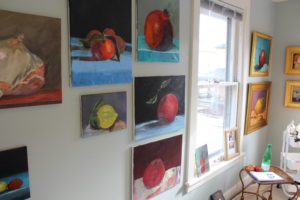 Another exciting realization for Parks Godfrey in particular has been the ability to continue to learn and grow with the help of other artists. “I didn’t realize it, being so new; I was so timid about coming in with such beautiful artists. But the more we talk to each other, it’s like you learn something new every single day,” she said.

Adams agrees, and has found her friendships with Parks Godfrey and Karen LaValley, the third Studios artist, to be entirely rewarding. “Even the most experienced and well-known artist will tell you that they’re always learning, they’re always striving to learn something and push themselves,” Adams said. “I’ve already learned a lot from Lisa just by talking to her about what her passion is, what her direction is, where she wants to go. It’s so nice to have that camaraderie.” 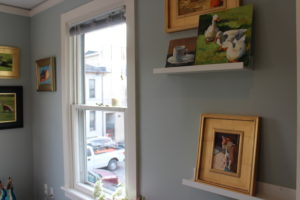 For Weiss, the fact that all three artists are women was no mistake. “I love women, and I’m thrilled to have the energy they’re providing,” she said. Since she knew the success of the Studios depended on the artists, she sought women who were open minded and receptive to new ideas. “It’s a privilege to have these artists here. This particular venture far exceeds what I thought. After 25 years of anything, I think some new energy is really wonderful. I’m grateful for it, and for Lisa and Amy and Karen’s friendship.”

Adams and Parks Godfrey share her gratitude. “I think we’re at a point in our culture where if you have an opportunity to lift women up, that’s absolutely worth every moment of it. For professional women artists – which I would consider us to be – this is a tremendous opportunity to put ourselves out there and say, ‘We’re serious about this; this is our life’s passion.'”

24 Lincoln Street Art Studios officially opened during the January 2019 Gallery Hop. Weiss and the artists already have several exciting ideas for the space, such as hosting short term workshops, critiques, and more. Interested patrons can stop by during gallery hours or any Gallery Hop to chat with the artists and see their latest works.