Art Spotlight: “And all the land was swathed with color” at Brandt-Roberts Galleries

The ShortNorth.org blog highlights the happenings of the Short North Arts District. In Art Spotlight, we feature the artists, gallerists, performers, and professional artistic companies of the District and explore their exhibitions, shows, and more. 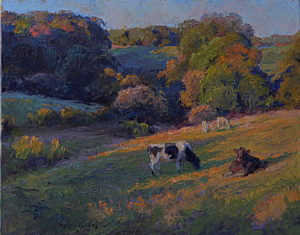 Plein air painter Mark Gingerich is known for his remarkable ability to execute a contemporary adaptation of impressionism, and for the past decade, he has showcased his talent in an annual solo show in the Short North Arts District. 2020 continues this tradition with Gingerich’s forthcoming new exhibition, And all the land was swathed in color, debuting at Brandt-Roberts Galleries on March 1. We chatted with Gingerich about the inspiration for his work and how his execution of impressionism allows him to achieve a truthful representation of the real world on canvas.

While the farmscapes and scenic views of Ohio that form the core of Gingerich’s work are part of this show, other new works include paintings of his travels in Burgundy, France and the Swiss Alps. This show includes more works depicting scenes from his European travels than usual for the simple reason that he loves being abroad and was there recently. Another important aspect of Gingerich’s work is his Amish Mennonite faith; his paintings are intended to capture the emotional response he feels to a world full of natural beauty, as well what he considers to be the unseen but felt aspects of a divine creator. “I believe God created everything, so everything we experience in the visual world is a reflection of his love for us. That’s just really cool to me,” he said. 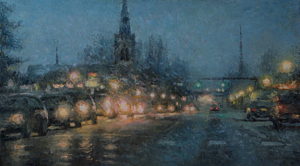 Gingerich discovered his talent for representational art early in life, but it was coming across historical plein air artists that struck a nerve with him. The Barbizon painters of France such as Jean-Baptiste-Camille Corot and Charles-François Daubigny, who were the precursors to the Impressionists, influenced how Gingerich paints. “The last 150 years has really influenced me, but I’m also aware of the two dimensional quality of contemporary work,” he said. In addition to a strong design, he also looks for a variety of shades, sizes, and lines, and how these compositional elements create an aesthetically pleasing image, which he calls a “real challenge.” “That takes a lifetime to learn, and I’m still learning that,” he said.

Gingerich has adapted the techniques of past masters in a contemporary way by almost exclusively using a palette knife, which he now prefers because of the spontaneity it can create by making unplanned marks. “There’s something about a palette knife that creates a few unexpected flourishes as it scrapes over an already rough surface;  the overall effect is crisp and clean and bold,” he said. He also purposefully leaves spots of thin-washed canvas exposed to create even more pronounced textural variety, though he feels too much can make a painting seem overdone, and endeavors to find a balance in his work. His intentionality in these marks are particularly effective in communicating light and color, so much so that gallerist Michelle Brandt came up with the title of the show as a way to both describe its artworks and allude to the thick strokes of paint used to make them. 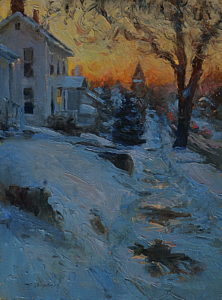 The skill and talent Gingerich possesses speaks to the longevity of his career, but his relationship with Brandt (and her predecessor Bryan Roberts) are important parts of his success. “Michelle is very thorough and has a good relationship with the community, and is able to help artists connect with a broader audience,” he said, noting he feels “privileged and blessed” to have his work in a gallery in the Short North Arts District. “If it connects with the audience and collectors, it keeps me going. It makes my time worthwhile. I’m not just painting for myself, I’m letting these pieces go in the hopes that they contribute to somebody’s life in a positive way, thereby helping the community and culture of the arts.”

Gingerich will be at Brandt-Roberts Galleries, located at 642 N. High St, on Sunday, March 1 for an artist’s reception to discuss the show. And all the land was swathed with color will be on view through March 29.