Art Spotlight: “Are You A Life-force?” Mural 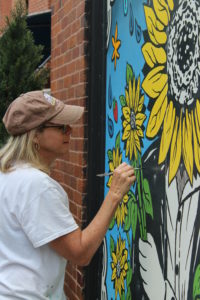 As the month of murals in the Short North Arts District is winding down, the latest addition to permanent public street art is now up. Are you a life force?, a collaborative mural between a musician, his band, and his mother, was installed over a large empty window on a wall at the end of the Bakersfield patio, brightening the view for patrons and pedestrians alike. We talked to the muralist, Sally Meier, her son, Taylor, and his band, CAAMP, about their inspiration and what sharing this project means to them. 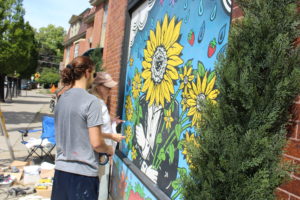 CAAMP, which recently signed to a national label, is quickly gaining recognition, helped by the release of a new album, By and By, the band’s third. Taylor Meier put immense care into crafting the lyrics, and feels the record is their most mature, showing growth and mindfulness. These lyrics are what his mother, local muralist Sally Meier, had in mind when designing the mural they commissioned. “I loved the line in the titular song that says, ‘Are you a life force?’; that spoke to me,” she said. The resulting artwork is a vibrant, joyful visual celebration, nodding to motifs from their past and present album art, which was originally designed by artists and longtime friends of the band Bryn Perrott and Steph Halla.

Sally began painting murals as a 16-year-old high school student, when she painted a wall in the Columbus Zoo & Aquarium ice cream shop. When zookeeper Jack Hanna saw the piece, he asked her to paint another, this time a 20-foot by 25-foot depiction of an elephant on the newly-built pachyderm building at the zoo. “He got a lot of publicity and he got a lot of people to come see it, and it started my career of painting murals and loving art,” she said. From there, Sally went on to study fine arts at Miami University and start her own business, called Admeier-It, painting murals by commission in restaurants and homes. 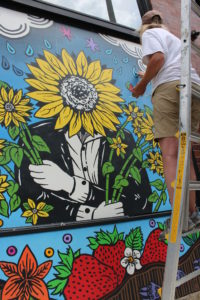 When her son asked her to paint a mural for Caamp that would be permanently installed in the Short North Arts District, she accepted and enlisted the help of band keyboardist Joe Kavalec, an art major at Ohio University, who was excited to paint his first mural. Together, they cut and primed the wood panels; enlarged, sketched, and painted the design; and sealed it with a protective layer, completing most of the work in the Meier family’s dining room. Last week, they fitted the panels together and adhered them to the empty Bakersfield wall, refining along the way and putting on the finishing touches.

On Sunday, the final mural was presented to the public during the Short North Sunday Bazaar, with the entire band and Sally present to meet fans and admirers. The family affair marks a special moment for Sally and Taylor, as this mural was the first professional artistic collaboration between mother and son. For Sally, being part of her son’s success is everything. “The fact that my son had accomplished something and I was a part of it was very overwhelming and surreal for me,” she said. Taylor echoed this sentiment: “She’s been our biggest fan for a long time and now it’s immortalized, which is awesome.”

Are you a life force? is installed on Buttles Avenue, next to Bakersfield, located at 733 N. High St.