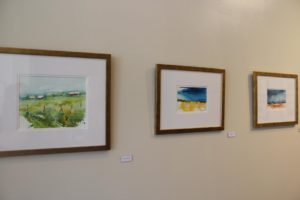 It’s an exciting time for art in the Short North Arts District. In addition to a new permanent sculpture installation, the sixth rendition of the Short North Mural Series, and new permanent public art planned for the future Graduate Hotel, a new gallery is now open. We talked to Sarah Gormley about her eponymous gallery, located at 988 N. High St., and chatted with her May artist, Christiane Curry, about her first-ever solo show.

Curry, a 79-year old French native, has been painting for as long as she can remember. Both her grandmother and mother were photographers, and during the war, Curry recalls repurposing the paper of mis-developed photos by drawing and painting on the backs of them. She painted because it was a passion, never pursuing formal artistic training and instead going into accounting and taking a job as a statistician in France. “It didn’t last very long,” she said with a laugh. In 1958, Curry met her American husband, Craig, while doing graphic design work and moved their young family to the US the following year.

Once in Columbus, Curry shared her passion for painting with others by teaching classes all over the city, including at Franklin Park Conservatory, the Cultural Arts Center, and in various recreation centers. Despite an allergy to the paint and to the solvent, she originally painted with oils, readily switching to watercolors after she was asked to teach a class using them. “It just freed me a lot, and it’s a lot less messy,” she said. “Oil is easier to paint; if you make a mistake, you can cover up and it may be more expressive. But I like the discipline of watercolor; you have to know what you’re doing.” 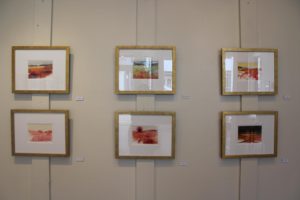 Her work changed again recently following a battle with cancer and the sudden death of her beloved husband. With the encouragement of family and friends to keep painting, Curry began to feel peace and purpose by depicting what she felt rather than what she saw, as she used to. Drawing inspiration from the sprawling French countryside, she uses vibrant colors to capture moments from her memories of her home country. “I call that my ‘memory bank;’ I’m not conscious of it, it just comes from me,” she said. She paints because she is compelled to do so, using her emotions to guide her brush; sometimes, a certain color in her pallette informs the setting of a painting, while others are purely abstract and based on her mood. This process helps her to clear her mind and reach a near-meditative state, allowing her to focus on her practice while providing catharsis.

Late last year, Curry exhibited her newer works at the Zanesville Museum of Art and gave a talk attended by Sarah Gormley, who is on the museum board. Gormley was immediately struck by Curry’s story and felt a personal attachment because she had also recently lost a close family member, her mother. “We just had a connection,” Gormley said. “At the time, I was thinking about opening a gallery; I didn’t know how or when, I didn’t live in Columbus at the time, but we went to lunch and I said, ‘If I open this gallery, can you be [a] show?'” Curry had never before been interested in showing in a gallery or having gallery representation – until meeting Gormley. “I just didn’t want to bother, until I met [Sarah],” she said. “She’s so easy to get along with, and really inspired me to get a lot of courage to paint more. It’s wonderful.” 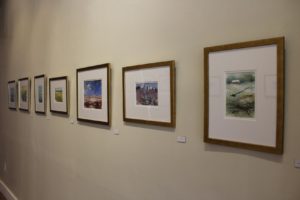 Gormley’s interest in opening a gallery began 25 years ago after she had just graduated from college and her grandmother bought her a piece of artwork as a gift. “Since then, I just thought of how wonderful it would be to have an art gallery, because it’s a source of joy for anyone. I think that art is and should be accessible to everyone,” she said. In 2018, Gormley moved from San Francisco back to her hometown of Zanesville, and then to a Wood Companies property in the District in January 2019, near a space of theirs that had been used for art pop-ups. “I had to say yes; I just can’t say enough about how supportive the community has been. I’m thrilled,” she said.

Curry feels similarly. “I look at my work here, and it adds a different dimension,” she said. “People who come and support [my work] who don’t know me at all – it’s so rewarding to have a total stranger buy something that you do. It feels right. I’m in the right place.”

Christiane Curry’s watercolors will be at Sarah Gormley Gallery until May 25.