One of the beautiful aspects of art is that its creators can find inspiration anywhere and reinterpret familiar objects and ideas in new and thought-provoking ways. This is true of the latest Studios on High Gallery exhibition titled Fair Trade Inspired, a collaborative show with original pieces of varying mediums by gallery artists who chose items from neighboring Global Gifts, the beloved fair trade shop, to inspire their artworks. Global Gifts manager Amy Phillips Gary originated the idea for the exhibition, which echos a similar show the retailer held in 2014. We talked to four exhibiting artists about the inspirations for their collaborations. 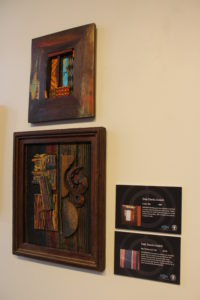 “Color Me” and “My Patterned Life,” Deb Davis-Livaich
Assemblage artist Deb Davis-Livaich uses found objects to create her work, choosing items that speak to her to make cohesive pieces. In this way, she feels a real connection to the fair trade artisans whose work is sold by Global Gifts, the majority of whom create their work based on the same principal. “Fair trade artisans often use what they have around, and if there are items that are just going to be thrown away, they turn it into really cool stuff,” said Phillips Gary. Davis-Livaich is exhibiting two piece for the show based on three items she chose from Global Gifts, including a scarf made in Ecuador, a dish towel, and distressed wood frames, both made in India. The fabrics are the basis upon which other objects like beads and wooden shapes are layered, held together by the distressed frames. The dish towels are made with Kantha embroidery techniques, which repurposes scrap material often used for saris into useful items. Artisan groups in India and Bangladesh work with economically disadvantaged women to help provide better opportunities. 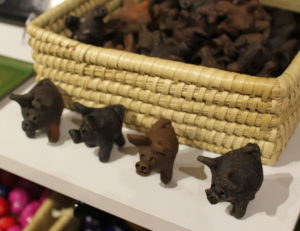 “The Day Francis Came Home,” Tracy Greenwalt
Artist Tracy Greenwalt typically uses old photographs to creates her paintings and the fictional stories for their subjects, so she found herself uniquely challenged in choosing an object other than a photo for her exhibit artwork. Ultimately, she landed on a Chanchito, a terra cotta three-legged pig figurine made in Chile that are widely given as symbols of friendship and luck. The origins of why these pigs are lucky is unclear, but the thinking is that a three-legged pig that can still stand must be lucky. Greenwalt, who frequently incorporates animals in her paintings, decided to add the pig into a story in which is has brought good luck to a family that may need it. “So it’s [like] an old family portrait and it’s kind of like their sour-in-nature faces are maybe a little less sour because the pig brought them good luck,” she said. 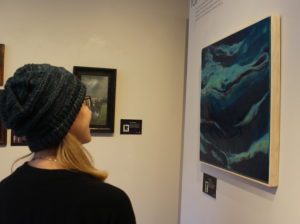 “Aurora Borealis,” Kim Maurer
Encaustic artist Kim Maurer creates her art using the ancient Greek method that uses a heat source to manipulate, move, and blend paint, which she makes herself from 100% beeswax and dry pigment, and to achieve the desired effect. In choosing an item from Global Gifts, she was drawn to a cobalt blue goblet made of Hebron glass, which is made from recycled bottles that are melted down and hand blown into new creations. “I was primarily drawn to it because of the color, and it reminded me of skyscapes. I do quite a bit of thinking about sky, earth, celestial, and terrestrial types of abstract views in my work,” she said. Additionally, her memories of her father’s dabbling in glass blowing, and of how heat is used to move colors and forms in glassblowing reminded her of her own process. Family is also important to the artisans that make Hebron glass, which is associated most with a certain village in the west bank of Palestine. The fair trade organization that makes the glass runs three different workshops at which some artisans are able to work from home, giving men and women the flexibility to care for children, gardens, and other responsibilities. 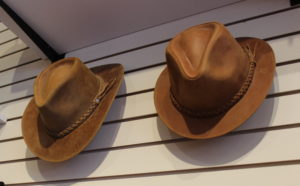 “Hare Under The Hats!,” Judy Hoberg
SOHG founder and sculptor Judy Hoberg frequents Global Gifts for their selection of fair trade chocolate, but it was the assortment of hats they sell that served as the inspiration for her exhibit artwork – specifically, she loves seeing the reactions of visitors to the store, particularly of those who vogue while trying on the hats. Hoberg’s whimsical hare sculpture is trying on three of the hats featured at the shop, including: a leather hat from Ecuador, made with ethically obtained leather, meaning the hide is collected after an animal passes naturally; a sun hat from Senegal made with a wax printing technique called kitenge; and a brimless, rounded cap called a kufi from Nepal, made by artisans who have fled violence in Tibet and have settled to build new lives.

Fair trade products are made by artisans all over the world who have been guaranteed fair pay and safe working conditions, and who are paid up front by partner organizations to help improve their economic conditions. Global Gifts sells fair trade items from over 40 different countries. Ten percent of proceeds of Fair Trade Inspired will be donated to Imani Workshops, a fair trade artisan group in Kenya which provides economic opportunities for people who are HIV positive or have AIDS. Fair Trade Inspired will be on view through January 31.