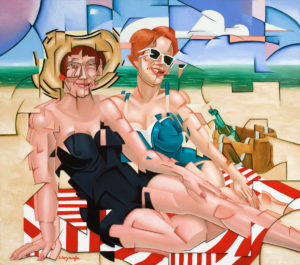 Almost 20 years ago, Harry Wozniak walked into Wallich Gallery, formerly located on High Street in the Short North Arts District, to have a painting framed. The gallerist was immediately impressed with the piece, and unfamiliar with the artist, asked after its creator. Wozniak informed her the painting was one of his own; she offered him a show on the spot. Now, with Marcia Evans Gallery for the past 10 years, Wozniak is preparing to debut a retrospective of his work, from some of his earliest pieces created in the early 1980s to his most recent works. We chatted with him about developing his artistic style, the theme of his work, and his excitement for the upcoming show and exhibiting in the District.

Though Wozniak calls his initial gallery representation a “stroke of luck,” this belies his undeniable talent; in fact, his first-ever gallery show almost sold out. Even more incredible is that Wozniak is entirely self-taught, beginning his pursuit of painting in what he calls a “straightforward, realistic style” by focusing mostly on still-life subjects. He then experimented with different styles including Surrealism, Expressionism, and Abstraction before trying a Cubist-inspired style in the early 90s. “I was just playing around with a still-life in my studio and started putting the work down on canvas in these sort of Cubist terms, and it surprised even me,” he said. Since then, Wozniak has heavily studied the history of Cubism and developed his own take on the style, refining his technique along the way. 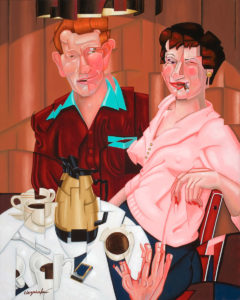 In addition to his uniquely characteristic style, Wozniak’s work is also known for its overarching theme, which often depicts enjoying life’s small diversions. He credits this to his tendency of drawing on fond memories and relying on photographs of family gatherings like birthdays and holiday celebrations to paint his subjects, which are frequently seen to be merry-making through “hedonistic pleasures” such as eating and carousing. “Rather than just painting a bowl of fruit, I paint a bowl of fruit with a bottle of wine,” he said. “I want people to come away from looking at something that I’ve done and be intrigued.”

For Wozniak, connecting with his audience and imparting a feeling of enjoyment is an important part of his work because of the universality of his subjects, to which he feels most people can relate. “To me, art is serious, but art is also fun,” he said, noting that he feels art should be fun for both its creator to produce and its viewer to engage in. Since the unexpected thrill of his first gallery show, Wozniak has been happy for the opportunity to connect with an audience in Columbus, particularly because both galleries here have been located in the Short North Arts District. “It’s a very exciting thing to be right in the middle of where everything’s happening,” he said. 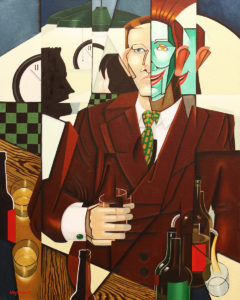 Wozniak is particularly pleased with his representation at Evans’ gallery. After Wallich Gallery closed, Wozniak and his wife spent a day strolling around the District to check out other galleries and talk to gallerists and gallery visitors to find new representation. It was his wife who discovered Evans’ gallery, and who raved about her deep knowledge of her artists and passion for their work, which immediately impressed Wozniak. “You want somebody who understands you as an artist, and who understands you as a human being, as a person,” he said. “We went in and I showed her some of my work and the rest, as they say, is history.”

The Harry Wozniak retrospective will open at Marcia Evans Gallery, located at 8 E. Lincoln St, on Friday, November 1 from 5:30pm – 8:30pm. Wozniak will be in attendance to meet visitors and talk about his work.