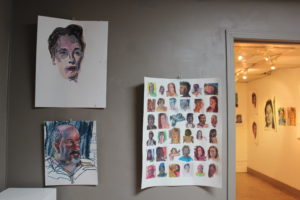 In 2019, the Columbus College of Art and Design has highlighted exhibitions throughout the city in a series called CCAD Grads in the Galleries to celebrate its 140th anniversary. One of Sean Christopher Gallery Ohio‘s annual exhibitions, titled Young Hearts, features works by current Columbus College of Art and Design students that are chosen by a juror, who also chooses artist to win the Best in Show and Honorable Mentions awards. Local artist Robert Tavani, whose solo show titled Heads is currently on view at the gallery, is the common factor that connects its annual exhibition and CCAD’s celebration. We talked with gallerist John McCutcheon and Tavani about the inspiration for the show and the intention behind the body of work.

McCutcheon conceived of this show as a way to both tie together the gallery’s annual exhibitions and as a nod to CCAD’s 140th anniversary celebration, tapping Tavani because he is an alumnus of both the art school and of OSU, which he attended for his MFA at the same time as McCutcheon. Additionally, McCutcheon has long followed Tavani’s work and was interested to see hundreds of heads hanging in the gallery. “What I like about the work and Bob himself is it’s emotional, and he works out of his intuition,” McCutcheon said. 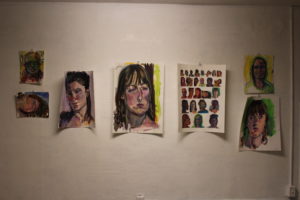 Heads is a culmination of about two and a half years’ worth of Tavani’s focus on drawing and painting heads. Each piece is either a self-portrait, or was created during a two and a half hour figure drawing class at either the Cultural Arts Center or the Vanderelli Room. Tavani began this body of work simply because he enjoyed creating art this way, and because he feels he is good at it from years of experience as an undergrad at CCAD. “I work pretty intuitively, so if I get an urge to create a collage of a bunch of heads, I try not to filter that in my head, I just indulge in it and see what comes out of it,” he said.

Over the period in which he was creating this work, he incorporated small changes to his process, such as using different mediums or changing his focus from collages of several heads to individual heads. Additionally, the pieces got progressively larger during the period, with works ranging in size from 9″ x 12″ up to 22″ x 30″. For the largest pieces in the collection, their size is particular striking because the heads they depict are larger than life and show more detail. 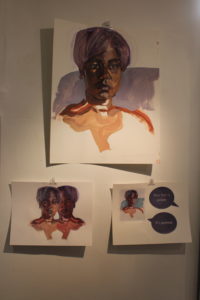 Though Tavani views his work as faithful reproductions of his subjects, they are painted in an abstract expressionist form, and he’s heard from many viewers that the depictions seem more dramatic or distorted as a result. “If there’s anything I’m trying to do, I’m trying to make the head believable. The last thing I would want is the viewer to look at it and think, ‘that eye is incorrect, or there’s something unbelievable about this head,'” he said. “I try to add a certain amount of detail to captivate the viewer.” The sheer number of heads in the show is impressive, with the effect of successfully communicating Tavani’s intent. Additionally, his decision to hang each piece with a simple clear clip – he dislikes frames – is visually interesting, making the show feel as if it came straight out of his studio.

Tavani titled the show Heads rather than “portraits” because the subject was modeling for a figure drawing or painting session and not a portrait drawing. During these sessions, the models don’t smile or style their hair a certain way because the point is to practice technique, but Tavani found that focusing on their heads carried the most psychological weight and was more complex and interesting than their entire bodies. He often drew or painted several of the same models in multiple sessions, forming professional relationships with them and conveying their personalities in subtle ways in his work.

Robert Tavani will give an artist talk during a mid-exhibition reception on January 4, 2020 from 4:00pm – 6:00pm during Gallery Hop. Heads will be on display at Sean Christopher Gallery Ohio, located in the Greystone Building at 815 N. High St, Ste H, through January 25, 2020.