Art Spotlight: “Into the Forest I Go” at Studios on High Gallery 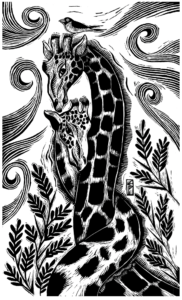 For award-winning newspaper illustrator, educator, and fine artist Evangelia Philippidis, the intricate balance of the natural world is what inspires her to create images portraying the importance of all living things in the cycle of life. She’s always been passionate about nature and animals, and wants to share that same passion with her audience. We talked with Philippidis about her artistic process and the stories she aspires to tell through the works in her latest show at Studios on High Gallery, titled Into the Forest I Go.

Philippidis spent 22 years as a visual journalist, which was an experience that taught her the value of doing a lot of research before beginning a new piece. She usually begins her artistic process by looking at various imagery, then reading about the habits and habitats of the animals she plans to use in her work. She also likes to imagine what the backstory and personalities of the animals would be, as it helps to tell the story of the piece. Indeed, each image that Philippidis creates has its own story and the entire collection of pieces work together to tell one complete, epic story of the natural world that we should all be more involved in preserving. “I strive to tell stories that are visually whimsical, but also have small surprising details which appear each time you view the image and hopefully bring a smile,” she said.

Philippidis strives to inform her audience about the endangerment of certain species, both fauna and flora, by portraying the subjects of her images in unusual settings or engaged in various fun activities. For instance, giraffes tend to tangle their necks together in both a loving embrace or while fighting. The giraffe subspecies pictured in “Tangled in Love,” one of her pieces in the show, are in fact two of the most critically endangered. If you look closely at where the giraffes’ necks meet, their spots form a heart. She wants her work to communicate that animals have souls and that trees communicate with each other. 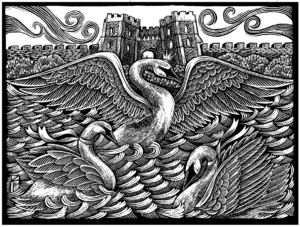 Philippidis had to learn to illustrate when she was hired on as a page designer for The Columbus Dispatch, but there was something about putting black ink to white paper that just didn’t click with her. That’s when one of her co-workers introduced her to scratchboard and taught her the technique. She fell in love with the graphic and powerful imagery of it. “The take away method of scratchboard connected with my weird brain waves and I was hooked,” she said.

Having been born and raised in Athens, Greece, Philippidis wasn’t exposed to television as a child, which caused her to spend most of her time outdoors. Athens is a major city, but when she was growing up there in the 50s and 60s, there were large expanses of fields, forests streams, olives groves, and even the sea that she would play in often. She no longer had this constant exposure to nature when she eventually moved to the United States, but she found solace in a television show called Mutual of Omaha’s Wild Kingdom. It opened her up to a whole new world of wildlife in other places, which only enhanced her personal connection with the natural world. 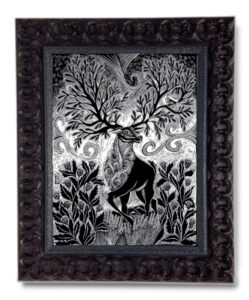 As a former student at the Columbus College of Art & Design, where she now teaches, Philippidis fondly remembers taking trips down to the Short North Arts District with her fellow bohemians to check out the different art stores. She specifically recalls shopping at Global Gallery for exotic fabrics, baskets and ceramics. She eventually had the opportunity to show her own work at Studios on High Gallery in the District, where she enjoyed being able to experience other artists’ work over time as well. “The Short North Arts District grew and blossomed along with me,” she said. “And to be a part of that is to complete a circle in my life.”

Into the Forest I Go will be on view at Studios on High Gallery, located at 686 N. High St, through March 4. Philippidis will be giving demonstrations and discussing her work during gallery hours on February 20.