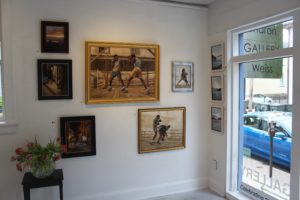 Art exhibitions are often meant to act as a space for an artist to deliver a specific message about their experiences, opinions, and ideas through their work. The latest exhibition to grace the walls of Sharon Weiss Gallery is the aptly-named Journey by local painter Michael Guinane. Though the show literally exhibits the artist’s new paintings that depict his travels in four different countries, it also marks the start of a more symbolic journey for Guinane, as it is the first time he has ever shown his photography in a gallery. We recently chatted with Guinane to learn more about his process and inspiration for the show.

The Wisconsin native came to Columbus to pursue a Bachelor of Fine Arts in Illustration from the Columbus College of Art and Design, which he earned in 2000. His early paintings, which gained him the notice of local galleries, were of a bygone era that he created using inspiration taken from turn-of-the-century photographs found in archives and historical society collections. As he began taking opportunities to travel, his work transitioned to focusing on his own history. “I wanted to [share] my voice of what I’m experiencing personally,” he said. “People have connections to artists because it’s their moment in time that they’re capturing.” 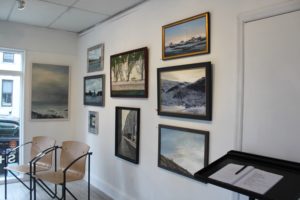 As noted in his artists’ statement, Guinane is motivated by delving deep into “the emotion of a single moment in time” by depicting an atmosphere that recreates the feeling or mood one has in specific settings. Whether or not a viewer has also traveled to the settings of Guinane’s paintings – namely Maine, Cuba, Iceland, and France in this show – doesn’t necessarily matter if they feel a sense of connection to the work. “For some people, these might be mysterious places to them, and some of these things are experiences they might’ve never had, and I have to take them there and let them have that moment,” Guinane said. “Every one of these is a place and a moment that I witnessed and saw, that I had a connection with at that exact time of seeing. As an artist, that’s what you want to do; sharing what you are experiencing in your world.”

For the paintings portion of the show, those moments are depicted on canvas through an almost collage-like process in which Guinane uses several of the photographs he’s taken to create an overall feeling of a specific memory. This manipulation can include moving figures and changing lighting to satisfy his preference for muted tones, which he enriches with layers of texture. To do so, Guinane used a self-developed technique that involves layering dry-brushed watercolors into acrylics or oils and using a varnish-like fixative to set them. 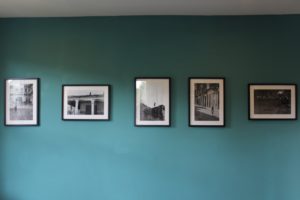 Conversely, the photography portion of the show are moments that were “just right,” Guinane said. “There’s some [photos] I didn’t want to paint; there was no reason to paint them because I captured the image exactly how I wanted it to be at that moment.” Another self-taught technique, photography has long been part of his process that he has developed over time. He uses a digital camera to capture every moment, but some are sought out specifically with the intent of not being painted. His studio includes printing equipment, allowing him more control over their processing. The one manipulation he does grant: making the photographs black and white with imaging software. Though he enjoys those images in his photography that capture vibrant scenes and bright colors, he felt the photos in this exhibit worked best in black and white because of their contrast of values in light and shadow. 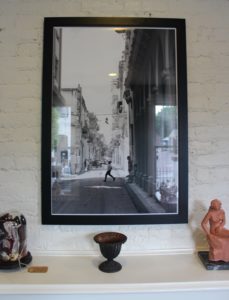 In the future, those color photos could be another exhibit at Sharon Weiss Gallery. Journey is his fifth in six years, a relationship that began when Weiss encountered Guinane’s work at Art For Life, a charity art auction of Equitas Health. He was approached by several galleries following that show and met with all of them, deciding on Weiss’s because it “just felt right.” Additionally, being part of the Short North Arts District was a major benefit for Guinane. “In a thriving city like Columbus that has a growing arts scene … to be in the Short North is something every artist would want,” he said. “I like to say the Short North galleries are a community and a family, and they’re very supportive.”