By the end of the month, the Short North Arts District will be home to one of the tallest public murals in the capital city, painted by Los Angeles-based artists Ryan Sarfati and Eric Skotnes. We spoke with the artists about how they got their start, their inspiration for the mural, and why creating public art in the Short North is meaningful to them. 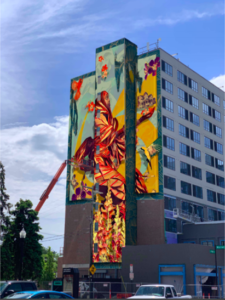 The latest, now-in-progress mural in the heart of the Short North Arts District, titled The Journey, will be its most vibrant treasure yet; its renderings, which will adorn the soon-to-open Graduate Columbus hotel, depict a visually stunning homage to the state’s capital as an open and welcoming city. That two California artists who had never been to Columbus, let alone the midwest, are the braintrust of the mural may seem surprising, initially. But Sarfati and Skotnes, under their respective monikers “Yanoe” and “Zoueh,” helped to shape their hometown arts district, having gotten their start in the early 90s LA graffiti scene at 11 years old, when they were only kids. In one way, they’re simply adding to the District’s history of unconventionality; in another, they’re simply reverse-engineering their modus operandi. 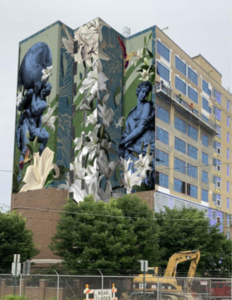 After years of graffiting, they began to tire of continually tagging their names. “It got a little mundane; I started realizing I just didn’t want to paint letters anymore. I’d get invited all the time and it just didn’t seem important to me,” Sarfati said. “I felt like I hit the pinnacle of what I wanted to achieve. The free time that I did have, I wanted to spend expanding on my artistic ability and my artists skills.” New opportunities arrived slowly, and with them, his realization that he was not only increasingly interested in the them, but also capable of them. Since shifting his focus, Sarfati has created murals in 20 countries and for companies including Google, Apple, and Nike.

For Skotnes, the opportunity to expand his skill came unexpectedly, while he was scouting a new graffiti location. After approaching the building owner, Steve Huston, with his idea, Skotnes found out Huston was not only an artist, but a master figurative painter. “He took me to his studio and showed me his work, and I thought, ‘I want to do that; how do I do that? How do I implement that large-scale?’,” he said. This led to five years of art school, after which he began executing what he’d learned into his abstract graffiti for a number of large studio productions including Brooklyn Nine-Nine, The Good Place, and Last Man on Earth.

It was Skotnes who unwittingly started the artists’ journey to the District when he sent Sarfati a different call for artists, out of Massachusetts, which he found on CODAworx, a global online community connecting artists with architects, cities, and companies who wish to commission artwork. Unfamiliar with the site and curious about other opportunities, Sarfati came upon the Graduate call for artists and asked Skotnes if he wanted to jointly apply. Out of 50 artists who applied, a rigorous selection process narrowed the search to four finalists, including Sarfati and Skotnes. They then visited Columbus to absorb the city’s history and present-day culture, implementing what they’d learned into a narrative and design renderings for their final presentation. 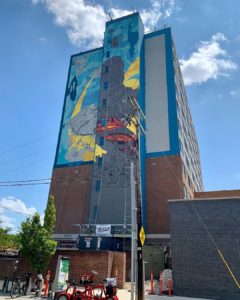 Skotnes conceived the idea of illustrating a journey in the mural because they’d learned that Columbus is home to the second largest population of Somali immigrants in the country, a fact they felt was important to depict. The immigrant’s journey to an unknown place “takes a lot of strength, a lot of resilience,” Sarfati said, noting that when they arrive, the hope is to prosper “in abundance,” and have the chance to flourish or “bloom” in another place. From these themes came designs that included a kneeling Somali woman (Hodan Mohammed, leader of the local Somali community organization Our Helpers and founder of the Columbus Somali Festival) dressed in a traditional guntiino garment on one side of the building, and god-like mythological figures (Atlas, Greek god of endurance and prosperity, and Abundantia, Roman goddess of abundance and success) on the other, all overlaying lush blue foliage.

The pair felt good about these designs, but also felt a piece was missing to connect them. While taking a break on his porch, a hummingbird suddenly flew up to Sarfati, hovering within inches of his face; “I felt like he was communicating to me,” Sarfati said. The hummingbird left and quickly returned with another, then left again and brought back two more. Sarfati felt there had to be a meaning behind the experience, quickly researching discovering hummingbirds are often seen as messengers between humans and deities, and are known for their endurance. “It just connected all the dots,” he said. “It connected our walls, it connected the concept, it wrote the narrative for us.” 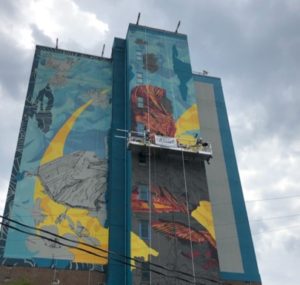 To their initial designs, the artists included Easter lilies, snapdragons, and hibiscus on each wall to symbolize the sweetness that is life itself, as well as hummingbirds making their journey around the building, plus a cardinal, Ohio’s State bird, and a Goldfinch, new friends made at the hummingbird’s destination. Additionally, the artists will create an augmented reality (AR) component through a mobile app which will show the flowers growing and the hummingbirds in flight around the building.

Their elation when they received the news they’d been chosen for the project was immediate and overwhelming. The scale of the project, and the creative freedom it allowed, were what initially attracted them to it, not only because it allowed them to push themselves artistically, but because of the potential to launch their careers even further. Their tight circle of friends include a Who’s Who of globally-celebrated figurative muralists, many of whom have also transitioned from graffiti, which inspires and motivates them. Now that they’ve begun sketching and painting on the building, the work can be grueling, consisting of hours-long stretches of work without pause. However, after several days of relatively uninterrupted work, they’ve hit their stride, the work therapeutic and cathartic, and are excited to see the mural take shape.

Despite not being strangers to creating artwork in and for an arts district, Sarfati and Skotnes said they’re just grateful for the opportunity. “[We’re] putting everything we have into this,” Sarfati said. “[It’s] a little piece of ourselves,” Skotnes added. “We hope to leave the Short North with some inspiring work. This is easily going to be my greatest piece,” Sarfati said. Once they show the world what they’re capable of in the District, what’s next? Going bigger, of course. “Ready?” Skotnes asked Sarfati, to which they both laughed. Sarfati replied, “Ready.”