Art Spotlight: “Jubilation” at The Castle 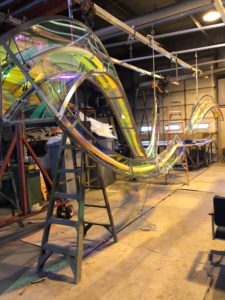 As the minutes of daylight add up and the days begin to lengthen, a new public art installation celebrates the various changes happening throughout the day – in sunbeams and shadows, in the blueprint of the Short North Arts District, and in the city as a whole. Local artists Stephen Canneto and Judith Spater are the creative minds behind Jubilation, a dynamic new sculpture that is suspended nearly 30 feet up in the air at the northwest corner of Second Avenue and High Street on The Castle building. We spoke with Canneto about his inspiration for the piece and what it means to him to be a working artist in the District.

Spanning nearly 25 feet in length, the three part sculpture is comprised of stainless steel, dichro laminate, acrylic, and hundreds of Bluetooth-controlled LED lights to deliver a dance of light and color that changes by the minute. Canneto and Spater started conceptualizing the work by thinking about the vibrancy of the District and the way it is “re-envisioning itself as a destination for young people with talent in all walks of life that are coming together to make our city the fantastic place that it is,” he said. They began looking to new materials that would capture the dynamic energy they wished to communicate, choosing LED technology to bring the work to life. “We’re working with light at night that animates it, and during the day as light rises and falls, goes from sunlight to shadow. We wanted to bring that all together in one piece; that, for us, spoke of the energy of Short North.” 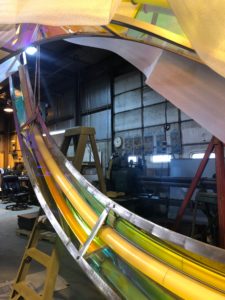 The team that helped to fabricate and install the piece is another important aspect of the work, which Canneto likens to musicians working in concert. “I really see myself as the composer and conductor of this public art project,” he said. “From the engineers who help us figure out the specifications for the materials, to the computer programmers that run machines that cut the acrylic and steel, to the fabricators who do the welding, forming, and fitting, all the way through the lighting engineers; each of these individuals is critical, like the musicians in a symphony orchestra.”

Spater was an integral part of the design process, helping to integrate the flowing, interactive forms that cross over each other in the piece and change color throughout the day with different sources of light. The process of bringing Jubilation to life started at what Canneto referred to as the “philosophical foundation,” as all of his work is site-inspired and site-specific. After viewing the worksite, Spater and Cannetor sketched the initial idea then created three-dimensional scale models of the building and installation, complete with mock ups of the LEDs inside the pieces. Once they presented and received approval for the piece, they moved to the design, build, and installation phases, engaging Jezerinac/Geers, engineers; Blackburn’s Fabrication; Lori Hochradel; AutoCAD; Laser Cutting Shapes; and Light It Up Columbus to complete the work. 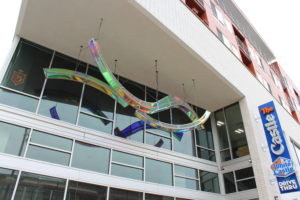 Canneto, perhaps best known locally for his iconic works at Franklin Park Conservatory and Downtown Columbus, has been creating public artworks for over 40 years. Inspired by nature, the built environment, and a fascination with technology and new materials, Canneto’s public artworks often draw upon his early life, military service, and project management for the U.S. Steel Corporation. It was there that he realized he loved the experience of bringing teams of people together  and wanted to create his own work. “My sculptures started out very small scale and got larger and larger as the ideas grew and as my determination to go from very small to big pieces into works in public spaces evolved,” he said. “This is my way of contributing to the vibrancy and life of the community. Communities are made strong and healthy by their ability to connect people with each other as a place. As a public artist, that’s my role – to help bring people together and to connect to the places in which we live, work and play.”

Jubilation is a project of the Short North Alliance and was made possible with support from the Borror Family Foundation and Ingram White Castle Foundation, with promotional and educational support provided by the Greater Columbus Arts Council. Jubilation is installed at 965 N. High St.