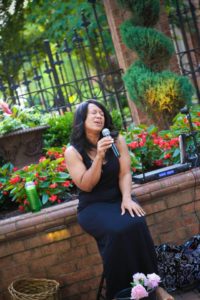 Picture this: it’s a Gallery Hop Saturday evening, and you’re strolling along High Street, stopping in your favorite shops and galleries to check out their latest. As you near the southern end of the District, a familiar song reaches your ears, sung by a powerful, soulful voice. You reach Victorian Gate and stop a while, enjoying the stylings of Hop veteran and beloved neighborhood favorite KaTanya Ingram.

Ingram, who identifies not as a singer or vocalist but as a street performer – “it’s unique, eclectic” – is celebrating the 10th anniversary of her monthly sidewalk serenade this month, an experience that first happened by chance. In 2009, Ingram performed at her first Hop with the Flytown Soul Band, which she came across while perusing Craigslist. Though the band decided to find other opportunities, Ingram was hooked. “I come back every month because I look forward to the experience I’m going to have with the people in the Short North and what’s going to happen this month,” she said.

She’s certainly had her share of interesting experiences in her life. The daughter of a single mother in the military, Ingram grew up in Berlin during the end of the Cold War. With little kid-friendly entertainment available, Ingram turned to the radio, where the only American station, the Armed Forces Network, played Casey Kasem and Shadoe Stevens counting down the top 40 hits in the States. “One that really gave me goosebumps was Whitney Houston,” Ingram said. “I Wanna Dance With Somebody (Who Loves Me)” in particular has had a lasting impact on Ingram, and she still features it heavily in her Gallery Hop rotation. 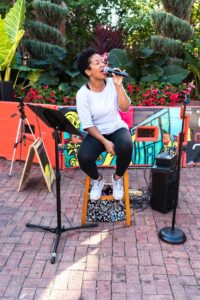 Songs like this frequently get people moving and shaking along to the music, putting smiles on faces and creating a joyful atmosphere at her Hop setup. Slower ballads inspire a different reaction and sometimes elicit stories from strangers who feel a connection with Ingram’s renditions. “Music is what feelings sound like, and it binds us all together,” she said. “It’s not what you say, it’s how you say it. If I’m thoughtful in the songs I choose because of how they made me feel, maybe that is conveyed to someone else and reminds them of how they feel about them.”

In addition to hearing about how a song may remind one person of their first kiss and another of their first dance at their wedding, Ingram has also made connections with important Columbus figures. Former CEO and Chairman of the Board of Cardinal Health, George Barrett, happened upon Ingram one Hop, stopped to chat with her, and learned she had been with the company since 2007. Soon after, he sought her out at work to learn more about her and to introduce her to new and better opportunities. Other connections have led to her singing the National Anthem during the State of the City Address for former Mayor Michael Coleman and twice at the Ohio governor’s mansion for former Governor Ted Strickland and his guests. 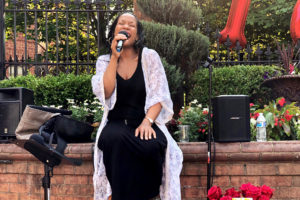 Though Ingram treasures these memories, she also appreciates the relationships she’s cultivated with perfect strangers. “I have relationships with people I don’t even know and have never met; busses drive by and the drivers wave and honk and open the window,” she said. She also notes her proclivity for the relaxed atmosphere of Gallery Hops and the freedom of performing on her own, preferring the relative anonymity of sidewalk performances to a stage because she has stage fright. While she sees many regular faces every Hop, several of which have come just to see her, she also enjoys people watching and singing for strangers. “You have people that appreciate art and they appreciate uniqueness [at Gallery Hop],” she said. “You meet a lot people and it’s amazing, the people you encounter.”