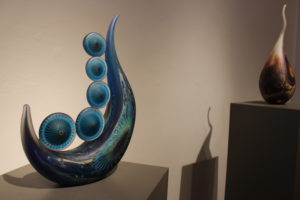 Imagine a slightly asymmetric crescent, its surface sprawling with deep sapphire craters and etched with snaking aquamarine rivers. Iris-like flattened spheres line its inner curve, shrinking in size as they ascend. Though this is not a description of a Star Wars-esque CGI celestial body, that’s the idea of the glass sculpture titled “Iris Alkali Celestial Moon.”

For the last few weeks, Sherrie Gallerie has been host to a veritable galaxy of otherworldly forms as part of Perception, the latest exhibition by Columbus glass artist William Ortman. The artist, a Columbus College of Art & Design grad, had visited the gallery several times before being represented by it, half-joking to his friend that he could be shown there. When gallerist Sherrie Riley Hawk and Gallery Assistant Margaret Wunderlich discovered Ortman’s work at the 2015 Columbus Arts Festival, to say Riley Hawk shared his interest is an understatement. “I had been looking for new up-and-coming artists doing new things, and I really hadn’t found anything. When we saw Will’s work, I was like, stop everything,” she said. “Watching him work with his team – I’ve seen seen Chihuly, and Morris, and all the best glass artists in the world, and it is the same symbiotic relationship, professionalism, and skill as watching those guys.” 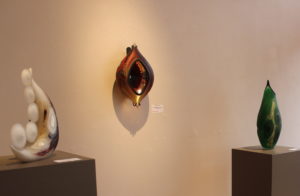 Ortman has spent the last year experimenting with his craft to merge techniques and create exciting new shapes, including the crescent moons and pod-like “portals” in addition to vase-like vessels, teardrops, and spirals. The titles of the more than 35 new works evoke various elements of nature, earth, and space, and Ortman drew inspiration from his research of naturally occurring designs and shapes. However, though the recurring irises in the pieces portray nature’s design as they resemble starbursts and as they occur in eyes, they are also an important aspect of the collection because they are meant to convey open mindedness and empathy, hence the title Perception. “I think society needs a lot more open thinking; how we see things, having perspective of other people,” he said.

Ortman was trained in the Italian technique of glass blowing, which uses long, narrow pieces of glass rods, called canes, that are created through the stretching and compacting of molten glass. The canes are then thoughtfully assembled and fused together to make a single, more complex cane, called a murrini. The murrini is typically sliced in order see the detail of the individual canes, but Ortman takes it a step further by pinching them in the center to create the iris effect of the oblate spheroids. “It gives it much more of a three-dimensional feel, and they just float,” said Riley Hawk. “It’s really genius and adds a kind of ethereal, underwater, outer space feel to it.” 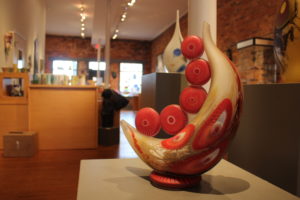 When Ortman had the idea to create new, more complex sculptural shapes for this collection, he worked to figure out how to incorporate the pinched murrini pieces into other elements by fusing them onto the crescent shapes and by surrounding them into more structural, hanging pod-like pieces. To create the latter, he used another technique called incalmo, which constructs a single object by fusing two or more blown glass elements. He likens these pieces to being windows into which the viewer peers.

Each piece can take up to 16 hours to construct, which does not include the time spent making individual canes and murrini, grinding and finishing the pieces, and constructing wall display hangers. To create a single piece, Ortman organizes all the elements and works in concert with an entire team of people, making artistic choices about color and shape along the way, with about a 50% success rate. Though there is a fair amount of muscle memory thanks to years of practice and experience, there is no dearth of planning and even then they must be prepared for split-second adjustments. “[The team] has to be in sync with what his vision is. It’s pretty magical,” said Riley Hawk.

Perceptions will be on view at Sherrie Gallerie until Sunday March 3.