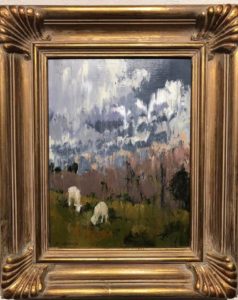 For Ohio-based painter Rick Akers, spontaneity is an important identifying feature of his method and artworks. However, the lived experience of the impressively prolific artist tells a clear story of his journey, starting with his nature-loving father in Appalachian Tennessee. We chatted with Akers about how his hobbies and interests led to his professional artistic career and about the new, more experimental works in his latest show at Sharon Weiss Gallery, titled Portfolio.

Akers fondly recalls childhood memories of early morning nature walks with his father, who pointed out the interesting colors, textures, and designs of the world around him. He later enrolled at the University of Dayton with fine art coursework in Photography and Impressionist and Post-Impressionist painters such as Van Gogh, Gaugin, Degas, and Monet, in which he learned about their technique of painting “en plein air,” or outside in nature. “Even when I went to college and learned about color theory, it was kind of already ingrained in me because of being outside, in nature,” he said. After earning a Bachelor of Fine Arts in Commercial Design, he moved to Columbus and worked as a designer and layout artist. Around this time, he began collecting antiques as a hobby because of his love and appreciation for “old and interesting things,” which eventually included 18th to 20th century fine art.

After a few years of collecting, Akers decided to try his hand at painting because of his collection, as well as his knowledge of color, design, and photography. He decided early on to emulate his favorite artists by painting en plein air, learning to move quickly to capture light and color, an energizing experience that he enjoyed and attributes to his background in layout design. Initially working with a brush, Akers switched to a palette knife at the suggestion of an artist friend. Applying oil paints to canvas through this non-traditional method has been Akers preferred technique for the last 30 years.

Akers’ early works convey a lighter touch and a sense of stillness; his influences are evident, but his style is his own. His mid-career works were made using heavy, broken strokes and thick paint when he transitioned to using a more contemporary scraping technique, giving them a depth of texture. This method was inspired by the blurry photos he took while he was riding in the passenger seat of a car in Santa Fe, which broadened the thematic elements in his work to include motion and expanded his skillset by painting from photographs.

Though Akers still paints predominantly en plein air, he conceived of his latest exhibition, an annual December show at Sharon Weiss Gallery since 1998, with the intent of showing his artistic range. Works in this show include his experiments with other types of paint such as acrylic and watercolors, and with other mediums such as drawing, mixed media, and crayon. All the pieces were made in the last year, including two 8″ x 10″ cityscapes that Akers painted just two days before the show was hung. Akers typically prefers bright colors, but opted to paint these planned additional pieces in a “grungier” palette, with ocher, umber, burnt amber, and sienna mixed in, with the goal of having a more urban and raw feel to them. 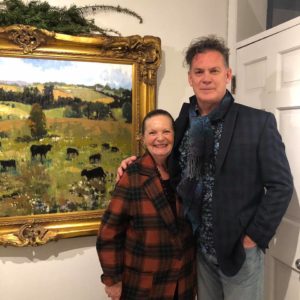 This variety of works reflects Akers’ own changing tastes in the pieces he has added to his personal collection over the years, which includes works from Sharon Weiss’ former antiques and fine art business a few blocks from her current location. That store, which was a frequent stop on Akers’ circuit, included a couple of contemporary artists she represented, prompting Akers to bring in some of his own works one day. “I had done some paintings early in the morning for my daughters for fun, and took them in to the store and showed them to Sharon; I don’t know why,” Akers said, laughing. “She said, ‘We need to do a show!’ and that’s how it started.” Though his work has changed over the years, Akers feels fortunate that Weiss has always encouraged and embraced his evolving technique.

Portfolio. will be on view at Sharon Weiss Gallery, located at 20 E. Lincoln St, through December 29.