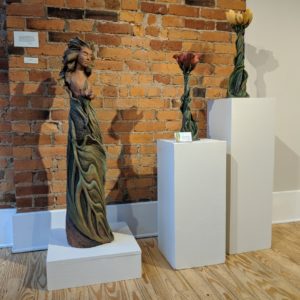 For sculptor Denise Romecki, working with clay is as natural as breathing. Shaping the natural element in her hands allows her to make beautiful works of art, but also to quiet her mind and feel at one with the earth. Unsurprisingly, the Pennsylvania native, who grew up near a State Park on the shores of Lake Erie, cites nature as highly influential of her work. This is currently on full display at Studios on High Gallery, where Romecki is showing her latest exhibition, Quiet Reflections. We talked with her about her expression of nature in her work and the unique opportunity that allows her to make large-scale pieces.

Up until her first classes at Columbus College of Arts & Design, Romecki had no real experience working with clay. “I always thought I was going to be a painter or an illustrator,” she said. It was during an introductory fundamentals class that she found her calling. “The first time I got my hands on clay, I fell in love. It was just a physical response.” This is an understatement; after earning her Bachelor of Fine Arts degree from CCAD, she went on to earn her Master of Fine Arts degree from The Ohio State University, eventually going on to teach ceramics and sculpture at the Cultural Arts Center, where she still teaches. Additionally, Romecki has been exhibiting since 1978, and is currently represented by three galleries. 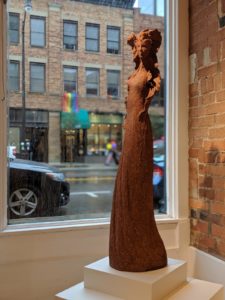 Her impressive artistic career aside, Romecki’s passion for her work is immediately evident upon viewing it. Her talent and thoughtfulness about the smaller-scale works in this show echo themes found in her past work, and understanding the technique and materials used in creating the large-scale works makes them all the more interesting. In the early 90s, Romecki was invited by a Pittsburgh-based artist friend to a workshop at Logan Clay, an industrial clay manufacturer in Logan, Ohio. Since then, for one week each year, Romecki has visited the factory to use their clay pipes, which are extruded from a machine in large rigid forms and set upright. Romecki then wraps them in water-soaked flannel and plastic to soften them, and once ready, she sculpts them into elegant forms and shapes.

For this exhibition, the large forms have vaguely feminine features, which Romecki credits to self-reflection. The gentle lines and curves and earthy tones of the pieces convey a sense of the inner peace Romecki feels while working with clay, and her intent was to make them symbols of a feeling of calm tranquility. Because these works use Logan Clay’s formula, which is a mix of natural clays from different areas, they have a grittier, more earthy texture that Romecki loves to highlight, sometimes keeping the finished works of paints and glazes. The sheer size of the pipes means she is able to complete only a few pieces at each annual visit. 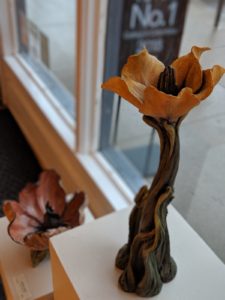 Though made with a different type of clay and in a more traditional technique, the smaller works in the show of flowers are included because Romecki feels they share a similar symbolism of peace and calm conveyed by the large works. She worked to create the sense of a garden; small pairs of hands are featured in some of the flowers’ centers, an intentional symbol of the connectedness that Romecki feels humankind has with nature. “Flowers are really powerful; we use them all the time, and I think we take it for granted, but every occasion in life involves flowers and it’s very special,” she said.

Another special element Romecki feels of her art is her ability to be part of a gallery that is located in an arts district. “Columbus does have that reputation for having the arts district, so to be able to say I’m part of it – I feel very proud to be here,” she said. “I enjoy the camaraderie of the studio, artists, and opportunity to be in the Short North so much.”

Quiet Reflections will be on exhibit at Studios on High Gallery, located at 686 N. High St, through July 4, 2019.