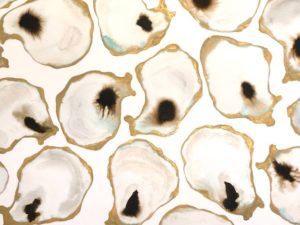 A few short months ago, Sarah Gormley opened one of the latest galleries in the Short North Arts District. In that time, the walls of her eponymously named gallery have been adorned with various of styles of art, including black-and-white New York street photography, watercolor landscapes of the French and Ohio countrysides, collaborative multi-media manipulated photographs, and abstract illustrative paintings. After a brief hiatus, Gormley will reintroduce the gallery in the format she’s always envisioned beginning with the September 2019 Gallery Hop. We chatted with her, artist James Young, and fellow gallerist Sharon Weiss about the gallery and its rebirth.

Gormley has been an art collector and gallery enthusiast since she graduated college, taking the leap to open her own 25 years later. Though the works she’s shown in the last five months have all been wall-hanging, the variety in mediums, focuses, and artists was itself a preview of what’s yet to come. “I’ve always imagined a gallery that feels as if you’re in somebody’s home, or a library where the walls are filled with different types of art,” she said. “I love that approach; I think it demonstrates how different mediums, styles, and genres can work together.” Regulars of the District may be reminded of Sharon Weiss and her gallery, the atmosphere of which Gormley wants to emulate, but in her own style. 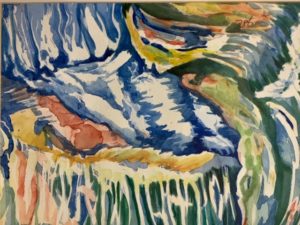 When Gormley began seriously pursuing her gallery dream, she reached out to Weiss to meet for coffee and brainstorm. “The ideas for her gallery just kept coming to us,” Weiss said. “She was eager to open her gallery with a bang; she has done just that!” Even so, shifting from her longtime career as a corporate marketing executive to a gallery owner has meant learning to be more laid back, though Gormley’s decisions about which artists and exhibitions to show are still deeply intentional and pragmatic. After a few months and feeling like she’d gotten her “sea legs” as a gallerist, she chose September to reintroduce the gallery in its new format as a nod to the “back to school” mentality of starting fresh. This translates to a salon-style show of 10 artists of varying mediums, including six who are new to her roster.

One of these new artists, Granville-based painter James Young, first showed in the District at Weiss’ gallery many years ago. When Gormley initially approached him about exhibiting in her new gallery, she had not yet opened the space, but was familiar with his “epoch American imagery” works, which depict farmland and traditional farmhouse architecture. Though Young is excited to be back in a gallery in the arts district, he looks forward to being in Gormley’s gallery in particular because of her passion for selling art through storytelling. “Sarah’s marketing experience gives her a unique approach beyond what has traditionally existed in the fine art world,” he said. 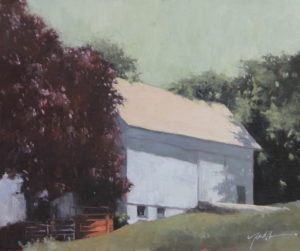 Additional artists in the exhibition include locals Adam Brouillette, Christiane Curry, Daniel Rona, duo Amy Schuessler and Duncan Snyder, and Melodie Thompson, as well as Tampa-based Katie White, Maine sculptor Daphne Pulsifer, West Virginia-based Jane Cardi, and NYC photographer Shammara McKay. Each was chosen because Gormley loves their work – though their technical skill and expertise cannot be understated – and believes others may, too. Though she knows not all the artwork she shows will be compelling to everyone in the same way, she hopes having a variety of styles in a gallery where art is accessible and the experience is personal will increase the potential of moving viewers to support the artists. From where longtime gallerist Weiss is standing, Gormley is well on her way to fully realizing her dream. “Sarah has featured talented artists and has a lovely space to show exhibits; having her, her love of the arts, and her lovely new gallery in the Short North is exciting.”