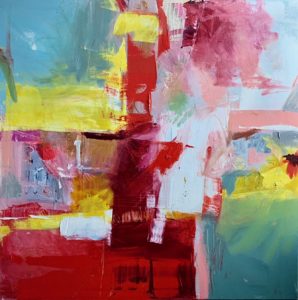 Right around the corner from Jeni’s Splendid Ice Creams and the iconic Short North Gothic, light pours into the floor-to-ceiling front windows of Marcia Evans’ small gallery. What the space lacks in size, it makes up for in large, vibrant works of art that cover every wall with each new exhibition. When it opened, it was one of the only District galleries to emphasize contemporary abstract art and artists. This is what recently led Pittsburgh artist Scott Hunter to Evans’ front door.

Hunter had been on his way to Kansas City for a gallery show and decided to research abstract art-focused galleries along the way. Naturally, the Short North Arts District stood out, and fellow Pittsburgh-based artists who have shown in the District previously also recommended it to him. “After hearing about the cultural center that the Short North is, it was important for me to stop there,” he said. “It was very cool to visit this sort of centralized area of really high-quality galleries. You don’t see that in many cities.”

Hunter, who creates both abstract and representational work, prioritized Evans’ gallery and brought postcards from other shows to give her an idea of his pieces. Evans was immediately interested in collaborating. “He’s one of the strongest new abstract artists I’ve seen in a long time,” she said. Evans, who will celebrate the 13th anniversary of her eponymous gallery’s opening this March, previously worked as a graphic designer and has been an art consultant for 33 years. 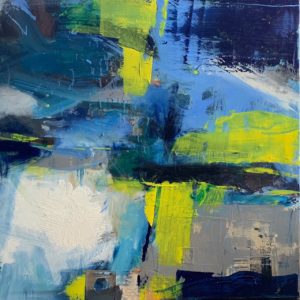 In Evans’ opinion, the strength of Hunter’s abstract work lies in its balance of both color and design. Hunter calls his work “not too complicated,” noting other elements that balance his work are texture and shape. The exhibition that will be at Evans’ gallery evolved from his 2016 abstract show called Three Foot Square, for which Hunter worked on square canvases, a shape he did not usually use. Though using a square canvas sounds subtle, this was a big change for Hunter, and a welcome challenge that helped him find that balance in his work. The pieces also use an element of collage, a technique he began incorporating about five years ago, in which Hunter finds images or textures that speak to him, applies them to the canvases, glazes over them, uses acrylic colors, and then finishes with oil paints. The presence of collage images varies from piece to piece, sometimes showing prominently and other times being covered entirely.

Though Hunter said he sometimes wishes he could continuously replicate his most popular pieces, he also acknowledges it’s not enough to feed his creativity. Building and evolving his work helps Hunter avoid stagnation, and constantly improving on his body of work is important to him. “I don’t want to keep making the same marks and using the same palette; I really want to try different things,” he said. He knows he must also find balance between being an artist and making a living, but is sometimes frustrated by his desire to be successful while challenging both the viewer and himself. “It’s one of the things that does drive me, because it’s so challenging to not be decorative, especially with abstract art, which is easy to do, but it’s difficult to do well.” 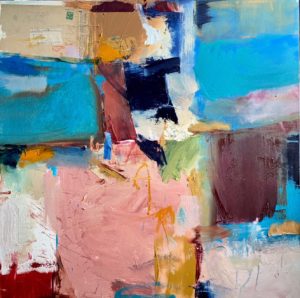 In addition to the collage work and canvas shape, for his show at Evans’ gallery, Hunter pushed himself to work with more saturated and vibrantly-hued colors than he usually chooses. “I like to think that I’m trying to push color a little bit further than I may have in the past, get a little more bold,” he said. “The biggest thing I try not to do is to have all of the colors working at the same time. I’ll often push a painting too far, ask myself what’s wrong with it, and a lot of the time the answer is there’s just too many colors.” In those cases, he removes some colors to find harmony.

True to abstract expressionist form, Hunter doesn’t cite any concrete inspirations, saying it’s more about the process. “The inspiration part of it is almost too personal; it’s an extension of me,” he said. “It’s more of a way of expressing myself and trying to push that language that I’ve developed over the years in just sort of messing around with paint. It’s about starting, slapping come colors down on the canvas, moving them around, editing things, taking things out, scraping away, adding to,” he said “It’s really about the search for that endpoint, when I know that the canvas is done, and when it tells me it’s done.” Even in titling his work, Hunter is careful not to lead viewers too much, prefering to give viewers an entry point to try to make sense of what they’re in front of.

Scott Hunter Abstracts will debut at Marcia Evans Gallery, located at 8 E. Lincoln St, on Friday, March 1. Stop by to meet the artist and get a first look at his new works, on view through March 30.