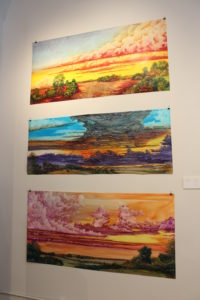 Bernard Palchick describes his relationship with art thusly: “It’s a path of stumbling and fumbling.” This simple, humble characterization may technically be true, but prolific artist is anything but clumsy or accidental in his work. Put more succinctly: “The beauty of Bernard’s work is he plays,” said Michelle Brandt, owner of Brandt-Roberts Galleries. We recently talked to Palchick and Brandt about his latest show, titled Sunset Series, for which he experimented with new mediums to create dazzling skyscapes.

The inspiration for Sunset Series came from a particularly vivid memory Palchick has from childhood of a “brilliant orange sky that went overhead all the way to the horizon;” a sunset rendered unusually vibrant due to a dust storm several states to the west. Palchick, who frequently features elements of nature in his work, recreated over a dozen similarly-hued sunsets from photos provided by his friends to highlight both their beauty and the inherent danger in it. “These paintings are really more about younger generations than they are about me, because they’re going to be here to witness what happens in 2050, 2080, when it’s predicted that climate change will have a drastic impact on the environment,” he said. He also feels sunsets are a good way to focus this message because they offer a universal language; everyone has seen a beautiful sunset.

For Brandt, it is important to let viewers come to this discovery for themselves. “There’s so much chroma, but the more I looked at them and spent time with them, the more I thought, ‘don’t be fooled by this color,’ because it’s almost like a facade,” she said. “They look really vivid and exciting, but in order for our skies to actually look like that, we’d be in a very dangerous place.” She also noted that while Palchick’s work is “wonderful,” it’s the deeper meanings behind his works that are the reason she chooses to show them. “He’s arrived at these paintings because of some sort of experience or thought process, and that’s what’s fascinating to me.” Already, Brandt and Palchick have enjoyed conversations with gallery visitors who are struck by the paintings and their deeper meaning. 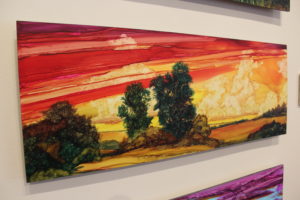 As Brandt said, Palchick’s work is wonderful, particularly when one considers that this collection was borne of his interest in experimenting with new mediums. Palchick loved two “dazzling” works he saw as part of an exhibition in the Pizzuti Collection that were created with alcohol ink on Yupo paper, about which he knew nothing. After researching the products, he decided to try them out. Unlike regular fine art paper and canvases, Yupo is a synthetic, waterproof material into which paint cannot penetrate or bleed. This makes colors light-fast (meaning they won’t fade over time) and can make paint easier to manipulate because it can be essentially wiped from the non-porous surface. Alcohol ink, an acid free, highly pigmented and fast-drying dye-like substance, is the ideal companion to Yupo paper.

In addition to shifting to using new types of materials, Palchick also had to adjust his technique, a change he welcomed. “It jars ones habits and one’s thoughts,” he said. The intensity of the inks’ colors and the speed at which they dry because of the alcohol evaporating quickly forced him to work faster than he typically would. ” With oils, I have months to noodle over this and play with that. [Alcohol ink] doesn’t give me that kind of time; it’s instantaneous, and the painting almost has to be done in the time it takes for the sun to set.” 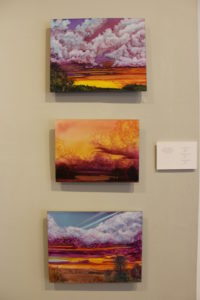 Growing and evolving his practice through new techniques is not a new habit for Palchick. He began drawing as a hobby in childhood, but initially enrolled at Purdue University to pursue a degree in engineering, a path his parents approved of. In his sophomore year, however, he took an introductory drawing course to fulfill an elective requirement, leading him to subsequently decide to pursue art full time. Palchick then completed a fellowship at the Fine Arts Work Center in Provincetown, MA, earned his MFA school from the prestigious Rhode Island School of Design, and held several positions at Kalamazoo College, including Professor (of sculpture and ceramics), Chair of the Art Department, Acting Provost, and Acting President.

Throughout his education and career, Palchick, like many revered mid-century artists, created art in his free time simply because he was compelled to do so. After retiring, Palchick and his wife, also an artist, moved to Powell to be closer to their family and chose a condo with two studios where they could each work. He began working with Brandt after asking around about reputable galleries in Columbus, and is glad to be affiliated with a space located in a part of the city that emphasizes and celebrates art. “There is a vitality to the whole area because of the galleries and all of these artists that are coming together to show their work,” he said.

Regardless of what medium he uses or what his subject matter is, Palchick knows one thing for certain: he will always continue to paint. “Seeing my work through gallery visitors’ eyes is a god-send; it’s so wonderful to hear their responses,” he said. “That’s part of why I want to show the work – to see what others see.”

Sunset Series by Bernard Palchick will be on view at Brandt-Roberts Galleries, located at 642 N. High St, through March 31.