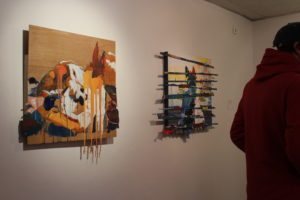 During the February 2019 Gallery Hop on Saturday, February 4, applause erupted as Danielle Michaux Wells was announced as the Best in Show winner of the annual Young Hearts juried exhibition at Sean Christopher Gallery Ohio for her mixed media painting, “On the Floor with Dahlia.” Wells, a second year painting and mixed media MFA student at the Columbus College of Art & Design, was understandably elated, as the honor is the first she’s received for her artwork.

Part of Wells’ excitement stems from showing amongst her peers in a show dedicated to students. “I’m with my cohort and all my friends, and I’m so proud of them,” she said. Indeed, among the many exhibitions hosted by galleries in the Short North Arts District every year, juried shows tend to be less common, particularly student shows. Young Hearts sought to address that eight years ago, accepting submissions of all mediums and all levels of CCAD students (both BFA and MFA) for a juried exhibition. 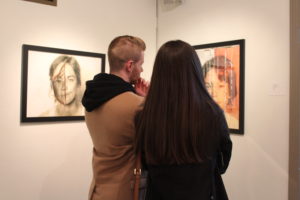 This year’s juror, Kelly Olshan, is a trained painter and art administrator hailing from Alabama and now living and working in New York. She has a personal connection with the District through Sean Christopher gallerist John McCutcheon, namely her long-term relationship with his son (and half of the gallery’s namesake), Sean. This led to McCutcheon, a CCAD alum, approaching her for a solo exhibition followed by the juried show, which Olshan characterized as “in keeping with the spirit of the gallery” because of his interest in and pursuit of fostering community-based relationships. Between this connection that introduced her to the city and her role as arts program manager with the Queens Council on the Arts, Olshan was an obvious and more-than-qualified choice as juror.

Unlike a regular exhibition, which is more typically curated around a concept or statement, a juried show is a compilation of artworks that a juror is tasked with reviewing and selecting according to certain criteria. After surveying the 27 submissions, Olshan selected 16 as entries for Young Hearts, noting she did not have set criteria but did try to “err on side of generosity” because she views the show as a learning experience. “I wanted to see artists that had something to say and were thoughtful about the way they said it,” she said. She also looked for pieces with slightly more refined executions that are representative of sophisticated and disciplined artists. 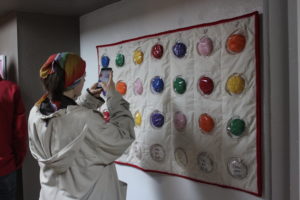 Olshan explained she feels jurying to be “more democratic” because a juror reviews what they’re given and builds the exhibition around the works, personally preferring it to curating because it mirrors her artistic process.” [Jurying is] less heady and intellectual, and more about surveying artwork and artists that exist and should be shown,” she said, noting that themes often emerge and create an interesting opportunity for individual pieces to interact with each other.

Olshan noticed a few central themes around which she grouped the works when thinking about the display of the show. The first group is a collection of more inherently formal aspects of art; painterly and abstract expressionist pieces are displayed in the largest of the gallery’s rooms, including Wells’ piece. Also displayed here are Honorable Mentions “Untitled” by Grace Korandovich, a vibrant pink fabric piece, and “Who We Are #2” by Alissa Ohashi, a de- and re-constructed photograph piece. Another group relates to themes of visceral psychological distress and body dysmorphia, including a large-scale piece with painstakingly hand-stitched fabric “pills” in a pack.

Ultimately, Olshan selected “On the Floor with Dahlia” as the Best in Show winner because she felt the formal visual aesthetics of the piece to be highly successful. “[Wells] exposed the wood grain of the base panel, which is interesting and dynamic without feeling raw or unfinished; it feels artistic and assertive,” Olshan said. Indeed, the 3D paint drips of the rectangular piece subtly breaks the shape and in an engaging way, and the piece as a whole shows its understanding of what it means to be an innovative painter creating dynamic images.

Young Hearts will be on display at Sean Christopher Gallery Ohio through February 23 during gallery hours or by appointment.