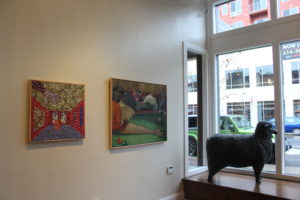 When Sarah Gormley moved back to her hometown of Zanesville, Ohio in 2017, she had no idea her homecoming would include opening her eponymous gallery, joining the Zanesville Museum of Art Board of Directors, or hosting a show of Zanesville artists. This weekend, the longtime collector will combine her roots and passion for art with the debut of Zanesville in the Short North, a group exhibition of nine artists that showcases a vibrant arts community. We spoke with Gormley and three gallery artists about the show and why it’s important to them.

The gallery is a few months away from its first anniversary, which has given Gormley the flexibility to explore different approaches and opportunities to exhibiting as she has worked to finalize her roster of gallery-represented artists. Though her gallery is decently sized, there’s still a limited amount of wall space, and her biggest challenge was selecting which artists to include in the show given the wealth of talent in Zanesville. Though she knew some of them personally from family connections, she was introduced to others through her work on the ZMA Board and personal research. “I tried as much as a could to recognize that there’s so many talented artists there; I’m very committed to supporting Zanesville artists,” she said.

Once the artists were selected, Gormley worked with each to choose the pieces that most spoke to her from their bodies of work to include in the exhibition. Like most of the artists she shows, her main criteria is that she has to feel a connection to their work in order to inspire the same joy she feels for it in others. As a result, her hope for the show is two-fold: that it will garner attention from Zanesville residents and entice them to come to Columbus to see the show, and that it will increase Columbus collectors’ awareness of Zanesville artists. 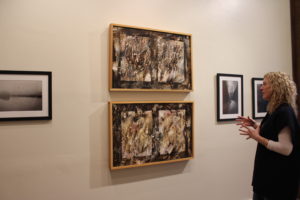 Photographer Jana Pryor will be showing her work in the Short North Arts District for the first time with this exhibition. “I’m honored to be included and especially happy to be introduced to a community that is so seriously engaged in what it means to be an artist,” she said. Her introduction to Gormley was recent, and her interest in participating in the show immediate in order to “help represent the talent that Zanesville has to offer.” She’s most excited about the variety of style and techniques exhibited by all the artists in the show, particularly because she is the only photographer. Her work, which is about exploring feelings of aloneness, longing, waiting, and stillness, is intended to tell a story, invoke or describe a mood, and convey atmosphere and/or emotions.

Mosaic artist John Taylor-Lehman echoes Pryor’s excitement about the range of artists in the show, particularly because they are all from his home city. Additionally, Gormley’s enthusiastic support and recognition of these artists is appreciated. “Her great energy and positive attitude about promoting the arts and artists makes me feel exhilarated,” he said. Taylor-Lehman, a retired public school science teacher, creates all his pieces using metal bottle caps, which he assembles into a design through a process of flattening and cutting. He has also shown at Gormley’s neighbor, Lindsay Gallery, which first exhibited his work in 2015. 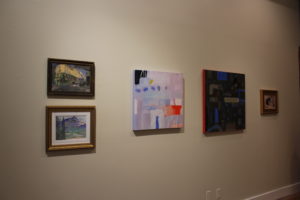 Painter Linda Gall will perhaps be the most well-known artist to Columbus collectors because she was previously represented by Rebecca Ibel Gallery. Gormley’s parents purchased several of Gall’s works from that gallery, some of which she inherited recently, forming her familiarity with the artist. Gall’s work features figures that time travel from middle America to landscapes in remote regions, capturing both universal and specific emotional environments in watercolor, acrylic, and oil paintings, which are often imbued with her unique sense of humor. She is excited about the show because Gormley “has brought a fresh point of view to showcase the artists of her hometown,” she said. Gall is also represented by Hammond Harkins Galleries.

Additional artists in the exhibition are oil and watercolor painter Jane Cardi, who constantly explores new techniques, subjects, and mediums; bronze sculptor Alan Cottrill, who has one of the largest bodies of work by any living sculptor; realist oil painter Nora Daniels, who captures the emotional essence of landscapes, still lifes, and portraits composed from her individual perspective; oil painter Paul Emory, who paints places he has never really been and people he has never met, and who is also represented by Sharon Weiss Gallery; abstract oil painter Marti Steffy, whose works are inspired by her travels to Italy, Spain, and France and who is also represented by Art Access Gallery; and oil painter Mike Seiler, who mixes non-traditional asphalt and alkyds into oil paint to embrace the ever-changing elements of life. Zanesville in the Short North will be on view at Sarah Gormley Gallery, located at 988 N. High St, through January 26.