Six years in the Short North and still going strong, Marcia Evans Gallery is the place to go for all things abstract and contemporary. Having been in the art business for 20 years, Marcia Evans has been consulting and working in galleries since graduating from Ohio University with a degree in fine arts. Evans has been making connections with collectors and gaining media coverage since she first started working as the sole graphic designer for Lazarus companies in Indianapolis. Since then, she has owned an art consulting business on and off and has worked in six separate galleries which all were located in Ohio. Yet, ever since moving to Columbus, Evans knew the “only place to be was in the Short North.”  She likes the fact that people of the region “feed off each other” and that the area has a strong sense of community. In addition, she realizes that the location for her gallery is of the utmost importance. “The Short North is not only the artistic and inventive hotspot of Columbus, but of all Ohio,” says Evans.  “My favorite attribute is the intermingling of shops, boutiques, galleries and restaurants and the overall diversity of spirit.” She supports the idea of collaborating with neighboring businesses in order to be more successful, and states that her ultimate goal is to “encompass the entire Short North as a whole.”

So how exactly does Marcia Evans find such inventive and unique artists to feature in her gallery every month? They come to her! About 90% of the artists Marcia features contact her based on news articles and online media that have covered her gallery in the past. She likes to feature the same artist more than once and enjoys building relationships in order to support one another and help create a mutual advancement. This month, Marcia Evans Gallery features artists Scott Galloway and Larry Hamill in a show titled, “So Different.” Marcia was enticed by how their work expanded her gallery’s horizon and was completely out of the box. Hamill and Galloway’s work both manipulate images and are not just “your basic photography.” Evans states that there is no rhyme or reason to whom she chooses and she simply wanted to start off the year “very different” from what she normally features, which is exactly how the show landed its name. 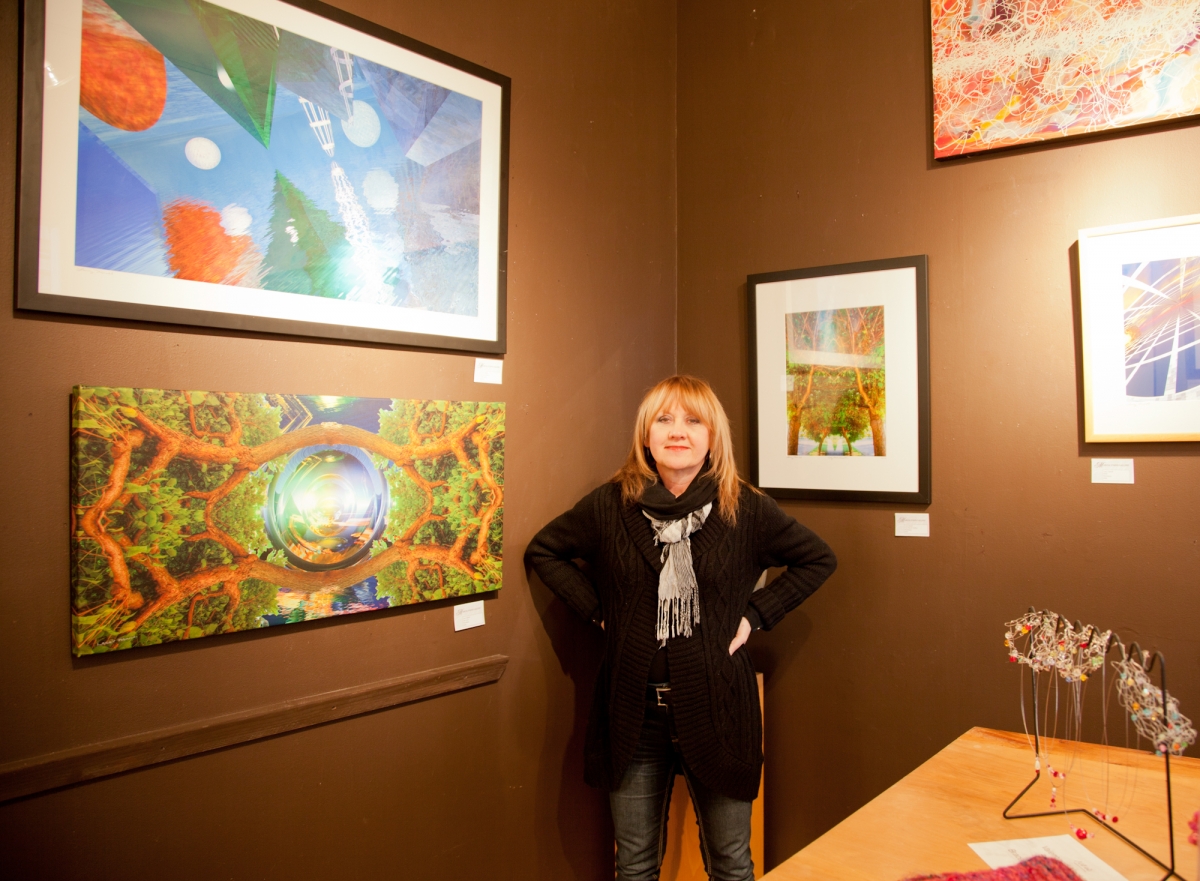 The show titled, “So Different,” features two artists that have proved, through photography, that art and beauty can be seen and experienced in both the familiar, and the not-so familiar. Scott Galloway, a Columbus based artist, works in photomontage in which he combines photography and scanned images using digital tools to create insane possibilities. Galloway uses a digital cut-and-paste method, where he “takes images apart and puts them back together in a different way, like one big jigsaw puzzle,” he states. It is in his unique way of taking already existing images and recreating them that he has distinguished himself as an artist in not only the Columbus area, but across the country as well.

Whether it was drawing pictures when he was young, or being encouraged by his art teachers to experiment with his artwork, Galloway has always had a passion for learning how to manipulate and better his work.  It was here in the Short North that Galloway was first able to exhibit his artwork in a gallery setting at ACME Art Co., a non-profit experimental gallery in the Short North in the 1990’s. Since then, his artwork has been featured in LA, New York, and many other in-between places. 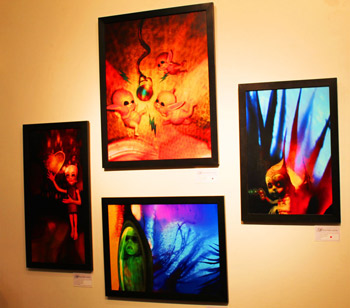 When using such a modern technique, it is easy to wonder where Galloway gets his inspiration from. “I guess I find inspiration in a variety of sources: silent films, animation, stereopticon images, comic books, old toys … the list goes on and on,” stated Galloway. He also loves exploring the fine line between “whimsical” and “macabre”, for he believes there is an amazing tension connecting the two.  Galloway ‘s work is currently on display at Marcia Evans Gallery.  “Showing my work there is a great way to sink my roots into the community a bit…to make my work more easily accessible and available,” stated Galloway.

Larry Hamill is also being featured at Marcia Evans Gallery and if one thing’s for certain, it is that Hamill is definitely not short on experience. Hamill, who graduated from OSU with a BFA in painting, drawing, and expanded arts, is recognized as a prominent Columbus Photographer, with over 30 years experience. His best known works are his acclaimed Columbus Skyline, as well as various architectural collaged images. While Hamill’s main focus is on corporate, architectural, industrial and medical settings, he also offers “computer designed imagery and an eclectic collection of stock photography,” as stated on his official website, Larryhamill.com. 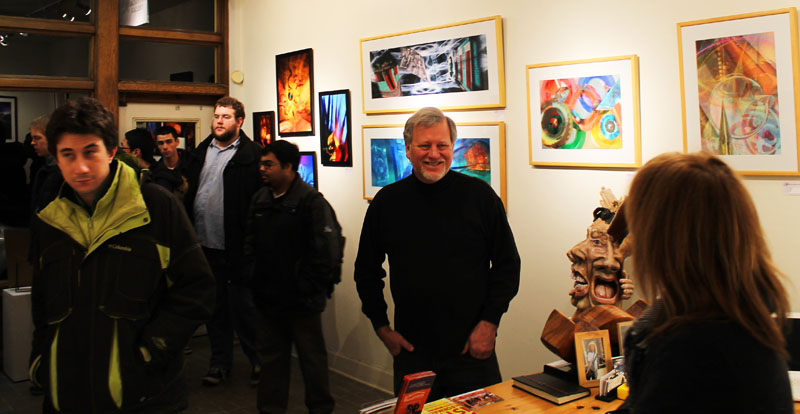 Art has always played a large role in Hamill’s life, and it was through the creativity and photography of his grandfather Clarence Swoyer that Hamill became inspired by art. Upon graduating from Ohio State, he made a living by creating commercial art, which he learned while on the job at a book publishing company. Now, having been self-employed his entire life, he has chosen to invest time into creating fine art. Having featured photographs from local area neighborhoods like German Village, to exhibiting work taken from across the country, like Redwoods National Park, and even featuring work from when he was in Holland, Hamill will go to any length to get the perfect shot.

He is intrigued by elements of color, design, texture, and light, and looks at the process of photography as an “exercise of visual exploration,” stated Hamill. He frequently intertwines various inspirations into his work, from books he’s read, people he’s met, and places he’s been to, and gains a certain satisfaction from creating images that people have never seen before. He appreciates the opportunity to display his work at Marcia Evans Gallery and to share his work with the public. Between Scott Galloway’s cut-and-paste methods, to Larry Hamill’s wide array of areas photographed, these two artists truly make the new Marcia Evans Gallery exhibit “so different.” 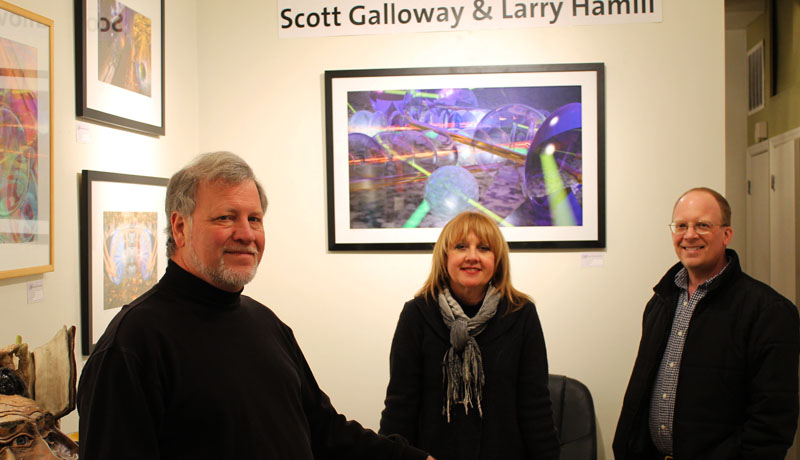 Overall, Marcia Evans is grateful for all that the Short North has given her in terms of collaborative business owners and creative talent that spawns from the region. To her, central Ohio has an endless supply of artists who gravitate here because of the distinguished and vastly admired Short North Arts District. Always keeping her career and genuine passion for art as a priority, Marcia makes sure to collect one piece of art from each artist she features. When she’s not in her gallery, you can find Marcia dining at one of the many restaurants in the Short North, or working with her group “Beaux’s Art” at the Columbus Museum of Art.