The Short North Arts District is known for its vivacity, diversity, and new and unique businesses. Niche boutiques and shops thrive in this dynamic environment, making the district home to new business additions throughout the year.  In this series we take you on a more in-depth look at these businesses that have come online this past year, and the entrepreneurs that call the Short North home.

A brand new face to the district’s retail scene, Big Fun is quickly making its mark on the Short North. With shelves crammed with vintage novelties and collectables, as well as a wide selection of modern day toys in stock, Big Fun brings merriment to all ages. The shop describes itself as a “cornucopia of delights, a cathedral of counter-culture, a warehouse of nerdabilia and nostalgia” and the description fits perfectly. Big Fun’s appeal truly is as varied as its selection. Whether you’re 7 or 70, it’s guaranteed you’ll leave Big Fun with a smile. . . and maybe a new toy too.

A shop this original is sure to get people’s attention, and it’s no surprise Big Fun has already garnered some big buzz. Owner Steve Presser and owner/operator Jason Williams shared a few secrets of their success as well as some of their experiences as a new business in the Arts District. 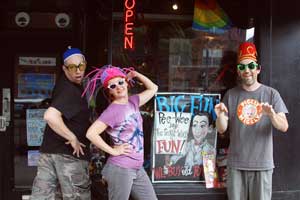 What made you decide to open a toy store here in the Short North Arts District?

Steve Presser: It all started in 1982 when I walked into a store in Chicago called Goody’s. I walked in the door and literally had to sit down. The owner, Ted Frankel, asked if I was okay and I said I was too okay. It was like seeing the Wizard of Oz in color for the first time. It was an epiphany.

Over the years, I became good friends with Ted and bought lots of stuff from him. Eventually, I told him I wanted to open a store like his. He said, “That’s wonderful! I’ll help you.”

I opened my first store in Cleveland on April Fool’s Day 1991. After a while, Jason, who worked with me at the store, said he wanted to open his own store. I was about to suggest the Short North and he said, “Well, how about the Short North?”

Jason Williams: pm gallery owner Maria Galloway originally turned us on to the Short North and Gallery Hop. Once I learned about Gallery Hop, I was sold. An area that does art walks and festivals every month? That’s brilliant. 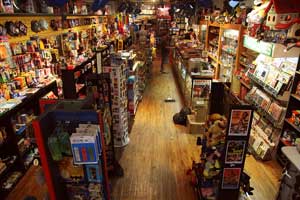 Big Fun is a unique store in that it holds a lot of memories for a number of adults, as well as catering to a younger crowd. How does that factor into Big Fun’s mission statement or general business plan?

Steve Presser: I think all of us at one point or another in our lives decide to grow up or not. But there’s always a time in your life when you need to go back to a time that was really special to you. The beauty of Big Fun is that nostalgia never goes out of style. A woman came into the shop the other day and we were chatting and she told me that she believed every person in her life, her kids, grandkids, would have a good time here. Our mission is to put a smile on everyone’s face. We want to make people feel better. We offer so many different levels of comfort for so many people and we try to cater to a broad audience.

Jason Williams: Essentially, Big Fun’s formula is to cater to ages 0 through 100 and we try to follow that philosophy and include everyone in between. 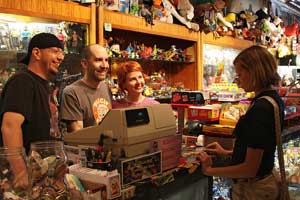 Big Fun has only been open for a couple of weeks, but so far, how has the experience of having a store in the Short North been?

Jason Williams: It’s a great place to be. It’s just a terrific group of people here.

Steve Presser: I’m blown away by the Short North. We’re ecstatic to be here. I’m just blown away by the diversity on so many different levels and it just keeps on getting better. There’s so much going on: Pride, Comfest, the DooDah Parade, as well as Gallery Hop. We’re just really happy to be down here. I’m genuinely excited to be where we are. We’re a block from Goodale Park, close to campus, and exactly 123 steps from Jeni’s Ice Cream. Overall, we just hope the town will accept us. It’s been a really good response so far.

What are people’s reactions upon entering your store?

Jason Williams: I think maybe a third of people remember it from campus and are happy to have us back. I’d like to see a census report for how many Columbus people are ex-Clevelanders. It’s gotta be a third. So they’re happy to see us. And the last third, it’s all new to them. They haven’t had the chance to go to Cleveland’s Big Fun so it’s a new experience which is very exciting for them. It’s win-win-win all around. 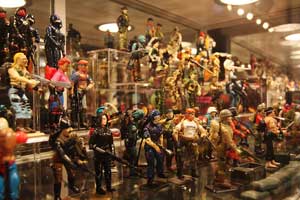 Speaking of the Cleveland shop, how does it feel to be named one of Playboy Magazine’s Coolest Stores in America?

Steve Presser: It’s such a humbling experience because that list includes so many great places like Jungle Jim’s International Market in Cincinnati and Amoeba Records in LA. When the guy from Playboy called me to give me the news, I thought he was joking. I didn’t believe him at first.

Jason Williams: There were 24 other people looking at this space, and our landlord really didn’twant duplication in ideas. I think people are really glad we’re not another bar. And we’re a kid-friendly place too. Parents can take their kids to Jeni’s, and then get toys after. It’s been a really positive experience. I think people pay attention to what brings personality to a city district. Lots of people have said they’re glad we’re here and that’s really as good as it gets. That’s as complimentary as it gets.