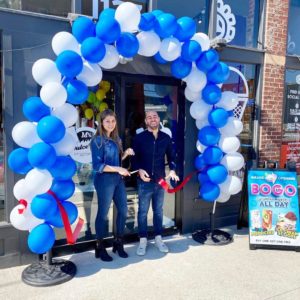 Just in time for warmer weather to start thawing the District, a new ice cream shop celebrated its grand opening during the sunny March Gallery Hop, this past weekend. Joining four other neighborhood ice creameries, each distinctly different from one another, Dulce Vida Ice Cream Factory is the most recent scoop in the Short North sundae. We spoke with Vince Fasone, friend of Dulce Vida owner Linda Nuñez and Executive Director of food safety consulting company FAMAVI Food Safety, about why they’re excited to be in the Short North Arts District, what inspires their impressive number of flavors, and what they’re looking forward to this year.

Dulce Vida opened its first location in the Hilltop near Hollywood casino in 2016, followed by a second location in Northern Woods in 2018. After noticing an increase in visitors from the District, The Ohio State University campus, Grandview, and Downtown, Nuñez and Fasone decided to pursue their dream of opening another location of Dulce Vida in the Short North Arts District, one of their favorite areas of the city. “We also feel our paletas and ice creams are works of art, so what better place to showcase them?” Fasone said. 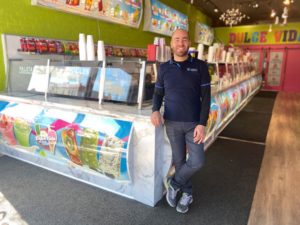 Indeed, the 50+ flavors of ice cream and almost 60 flavors of paletas Dulce Vida offers is impressive and a testament to their creativity and ingenuity. The majority of their flavors are common in Mexico, which Nuñez and Fasone regularly visit to find new trends, but Dulce Vida also offers local flair with flavors such as their Buckeye paleta, which was created as a nod to OSU. The interior of the shop reiterates the explosion of artistry in the flavors, its well-lit cases and lime green walls with bright pink, blue, purple, and orange accents throughout the space giving the feeling of a party being throw in honor of every patron who walks through the doors. 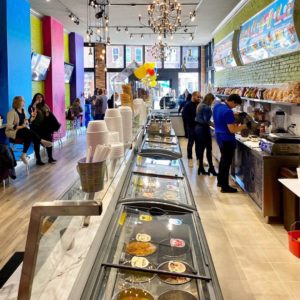 The feeling is mutual, as the neighborhood and its patrons have embraced Dulce Vida since its February 1 soft opening, and even more so during the Gallery Hop grand opening celebration. Fasone said everyone has been “very welcoming and excited about the variety of offerings [and] flavors,” particularly the Columbus Latino community who live and work in the area. Bringing even more diversity to the neighborhood is something Dulce Vida is proud of and excited to continue in its future, as well as helping to grow the neighborhood and transform the northern end of the District. “[We] are excited to see how it will evolve over the next few years,” Fasone said.

Dulce Vida plans to integrate with the community by offering kid’s events such as face painting and balloon modeling, which it currently offers at its two other locations, as well as new events for Gallery Hops that could include artisan pop-ups from Latin American vendors and musicians. The shop also offers weekly specials, such as buy two, get one paleta free on Mondays, and their signature Mangonada, a mix of mango sorbet and fresh mango cubes covered with chamoy sauce, chili powder, and finished a Tamarind straw, for $4.99 on Tuesdays.