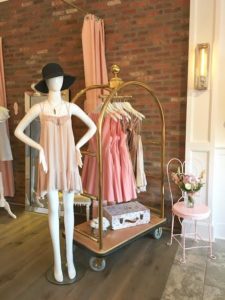 Nothing can bring out your fabulous side like Jolie Occasions. Browsing gold piping and bellman carts that serve as display racks, all by the light of a chandelier, a Short North Arts District shopper experiences a freshness that is matched by the items found on said racks. The boutique’s name comes from the French word for “pretty,” which is a simple yet accurate descriptor of the women’s clothing, jewelry, handbags, candles, and more Jolie has to offer.

All of this does not come at an inflated price tag, either. Don’t let your shopping day out be cut short by the unexpected cost of that perfect dress you saw in the window, and just had to have – the average price of Jolie’s pieces is around $60.  Mostly everything is under $100, with new items stocked every week.

At the heart of this dusty-pink wonderland is owner Stephanie Tersigni, whose business is a testament to her love of both fashion and the Short North Arts District. She has worked in fashion retail since high school, which is where she first imagined a dream of someday owning her own boutique. She graduated from Miami University in 2013 with a degree in organizational communication and marketing, as well as the reputation of being the fashion club’s leader under her belt. She then worked for Express here in Columbus.

In addition to knowing she learned a lot from Express and the rest of her career when she was let go, she realized it was time to take the leap and create the boutique of her young desires. “I had no other option,” she says. “I couldn’t go back to corporate.”

Thus, Jolie Occasions was conceptualized. In college, Stephanie had visited Ohio State friends in the Short North Arts District, and knew it was the perfect place to set up her new business. “There is so much stuff to do, and there are a lot of young professionals, students, and Greater Columbus Convention Center guests from out-of-town [here],” all of which fall under her market segment or contribute to the massive amount of foot traffic in the District, an asset highly beneficial to boutiques. 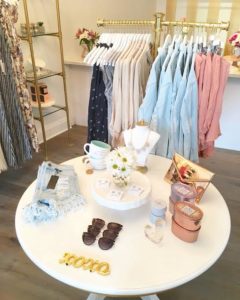 Chasing dreams is often difficult, and here was no exception. However, Stephanie persisted among naysaying banks. “Boutiques are thriving, but with online shopping and big box stores, lenders think that retail stores won’t work.” Ultimately, Jolie Occasions proves them wrong as it sits pretty in pink on High Street.

While Jolie Occasion’s products are affordable, Stephanie says she wants to compliment the other boutiques in the District, not compete with them. The uniqueness of the individual stores and the people who owned them are what inspired Stephanie to choose the District as Jolie Occasion’s home, after all.  She reflects: “I was scared before I started, but I couldn’t have been more wrong.  The shops, the people, and the customers are so supportive, and they really made me feel welcome. It’s a really tight-knit community.”

Stephanie advises budding entrepreneurs with a blunt but time-tested phrase. “Just do it,” she explains. “It sounds cliché, but just do it. People will say to me, ‘oh, I would love to own my own business,’ and I think, ‘what is stopping you?’”

Many people fear they could never learn enough to start a small business. Stephanie says that since she read a lot of books and articles, she initially thought she knew what she was doing; but ultimately, “no one can prepare you.”  Further, “If you want it, you can do it, [and] you have to love it … I wouldn’t trade [small business ownership] for the world.”

Another simple word of advice she gives is to just be friendly and nice to people, whether customers or neighbor store owners.  She is at Jolie Occasions almost every day and makes a significant effort to make anyone walking in feel welcomed, just as the Short North Arts District did for her. 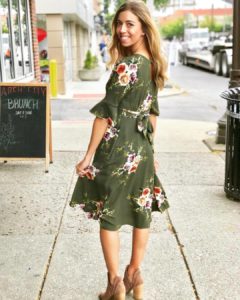 When it comes to Stephanie’s favorite spots in the District, she names her neighbor, Arch City Tavern, as she has been eating there long before Jolie appeared. “Their parmesan truffle fries are to die for.”

Rocket Fizz also makes the list. “You really are a kid in a candy store!”

She also likes Tigertree for its “different vibe,” Zest Juice Co. for online ordering and pickup, and The Candle Lab.

As for events, Gallery Hop is always something to look forward to because of the people, musicians, and artists. She also recommends HighBall Halloween, this past year’s of which she served as a costume judge.