The Short North Arts District is known for its vivacity, diversity, and new and unique businesses. Niche boutiques and shops thrive in this dynamic environment, making the district home to new business additions throughout the year. In this series we take you on a more in-depth look at these businesses that have come online this past year, and the entrepreneurs that call the Short North home.

What do you want to be when you grow up? Often times the answer to that question isn’t so easy. Just ask Gavin Meyers and Tim Ward of the Short North’s own, North High Brewing.

In 2011, the pair were studying at The Ohio State University when they decided to follow their passion by opening a brewery. “We were both getting our MBAs,” Meyers says. “Tim worked in the engineering department at Honda and I was in internet marketing and we both just really, really loved beer.” 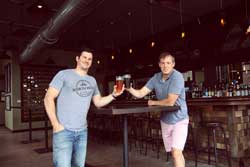 Coming to the realization that they were not doing what they wanted, the two boldly decided it was time for a change.  A little over a year later, after an incredible amount of hard work, they saw their finished product, North High Brewing, open its doors in December 2012.

Featuring a traditional bar side, North High Brewing also introduced the Brew-on-Premise feature. Meyers and Ward hope that this will be a significant draw as North High is the only brewery in the city that offers this service. “This is where we set ourselves apart from other businesses and make what we’re doing unique,” Meyers explains. “The Brew-on-Premise aspect, in which customers can take part in the action and become Brew Master for a day, brings in people from all over making us a destination location.”

So why the Short North?

Meyers: When we first started working on the business, we knew that we wanted to be on High Street. I used to manage a bar on South High Street 10 years ago. We just knew that we wanted to be a part of the energy of the Short North. The great thing about the location that we picked is that we are within walking distance for Ohio State students and we are becoming increasingly more accessible for those visiting the Short North for Gallery Hop and other events.

How does the Brew-on-Premise process work?

Ward: The Brew-on-Premise is around a three-hour process that we guide guests through. We have 40 recipes that guests can choose from or they can bring in their own. All 40 recipes are North High Brewing originals; there aren’t any clones. 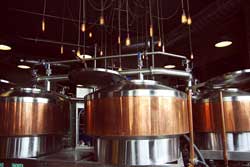 We see that a lot of people make their decision about what they want to brew by first getting a flight to taste and then deciding. This way, they are interacting with both the process and our already-brewed offerings. The brewing-your-own-beer is definitely the thing that sets us apart, but the biggest challenge so far has been getting people to realize that they can do that.

What does the future hold for North High Brewing?

Meyers: The one thing that I think we hadn’t planned on was that we would need to expand the brew house to an 8,000-10,000 square foot offsite location. I don’t think that we anticipated the explosion of demand for our beer in other bars. We already have more than 20 accounts that serve our beer on tap.

Ward: Every keg that we make is sold, it’s gone. Either here or in the 20+ places that carry our product. If we have inventory, we can call up any account and they happily take it.

Meyers: From day one, what we’ve always had in the business plan was franchising. That’s something that we definitely want to do and we feel like this concept could do very well in cities like Indianapolis and Cincinnati. This location would be considered the flagship or pilot brewery and then the others would simply be replicating the Brew-on-Premise aspect and retail experience. 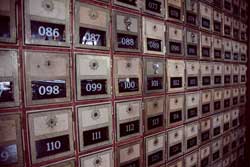 Providing a fresh take on the local brewery, North High Brewing features an extensive beer menu daily and food from Commonwealth Kitchen every Thursday, Friday, and Saturday. Check out northhighbrewing.com for more information on what’s on tap, upcoming events, and to schedule a time to brew your own kettle!