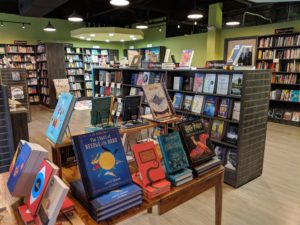 Book lovers, rejoice: as of November 21, the Short North Arts District’s latest independent bookstore, Prologue Bookshop, is officially open for business. The road to the shop’s opening reads like many great stories: full of compelling characters, toil and travel, and even a few plot twists. Our protagonist, Dan Brewster, recently sat down with us to tell his tale.

Growing up, the Cleveland native was used to being in close proximity to a stellar library system; he even worked at the Cuyahoga County Public Library in high school. After graduating with degrees in Computer Science from Washington University in St. Louis, he moved to San Francisco for work, where he encountered a different network of book homes: independent bookstores. “I [was] amazed at the variety of the interest and the characters of the stores,” he said. “Libraries tend to have a different appeal; I hadn’t really realized the appeal of bookstores before in the same way. I was talking to a friend not long after I moved there like, ‘when we retire we should totally open a bookstore,’ at the time thinking that was 40 years away.” 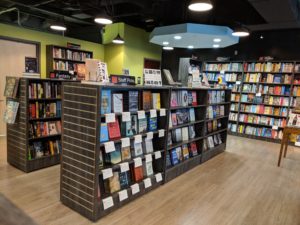 Here is where the plot thickens. While working as a computer programmer at Goodreads, a web-based social network for book cataloging, Brewster decided to attend a bookstore boot camp workshop. As he began to enjoy his programming work less and less, and after realizing independent bookstores have a viable financial model, he found himself considering a career switch.

After six years on the coast, Brewster decided to capitalize on the recent rise of indie bookstores by opening his own. His one requirement: it had to be within a 24-hour drive of Cleveland. This gave him a wide range of cities, which he explored over six months to find the perfect location. His research, which included scouting metro areas to determine the proximity of population centers, upscale shopping districts, and bookstores, eventually led to Columbus.

Despite growing up only a few hours north, Brewster was not familiar with the capital city until he began his search. “I think bookstores are a huge part of [being a] cultural center of a city,” he said. His research showed that most cities with upscale shopping areas tend to have several bookstores. “When I came to Columbus and I discovered the Short North didn’t have a bookstore, I thought, ‘that doesn’t seem right.’”

Though he was interested in the District, Brewster hadn’t found the right location and was instead eyeing a spot in Clintonville. He hesitated – “I still wasn’t really sure what I was doing,” he said with a laugh – but shortly after, he jumped on a vacancy in the Dakota building. “It’s one of those things where, I think, you have to be in the right place at the right time for it to work. We were in the right place, in the right time, with the right team, and able to find a great location,” he said. 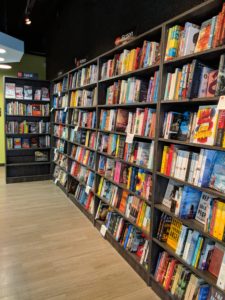 Once word was out, Brewster began receiving non-stop interest in when the store planned to open. “The community has been wonderfully receptive,” he said, noting that building neighbors Bourbon & Barley Saloon, Roaming Goat Coffee, and Red Giraffe Designs relayed the frequent questions they fielded from excited customers. “A lot of why I wanted to start the bookstore in the first place was [because] I feel like it’s an important part of the community. I think that it adds something in helping people better understand their world and be educated … we want to live up to those ideals.”

In addition to contributing to the local community as a bookstore, Brewster is excited for Prologue to join the ranks of the many small, locally owned businesses in the District. Now that the shop is open, Brewster is looking forward to planning events with local authors and publishers, and to collaborating with neighboring businesses.

Prologue Bookshop is one of almost 50 businesses participating in the new Short North Arts District Holiday Trail presented by Huntington. Shop local this season to complete the trail and get free parking! It’s simple: