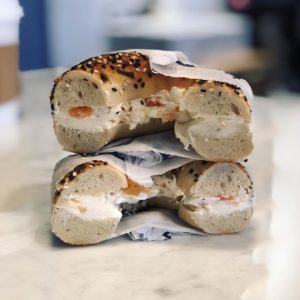 No small amount of experience, business acumen, planning, and patience were involved before The Lox Bagel Shop officially opened its doors at the tail end of 2018, but it’s all been worth it for Crowley. He began his career on the food side of the industry, living and working in an impressive list of cities ranging from coast to coast. About a decade ago, Crowley returned to his hometown of Cincinnati and got his first taste of restaurant ownership after opening a farm-to-table eatery with friends. Although that business has since closed, Crowley gained valuable first hand exposure and decided to learn everything he could about the management side of the industry.

He enrolled in the MBS program at The Ohio State University Fisher College of Business and met his now-wife, a Columbus native whose preference was to stay in her hometown. After graduating, Crowley lived in the District and began working at Northstar Cafe, quickly realizing he loved the community and wanted to adopt the company’s values for his own future business. “[They] showed me that you can have unrelenting values and standards but done in a more casual and life-balanced sort of way,” he said. He kicked around several restaurant ideas until landing on a bagel shop about three years ago, which he said has “been rolling downhill ever since.” 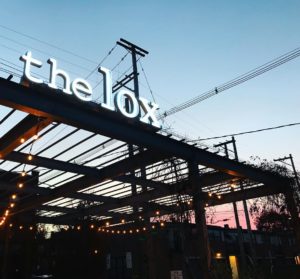 With his bagel-shaped target in place, Crowley set about finding a storefront and assembling a team. His introductory relationship with The Wood Companies through his Northstar connection helped when one of their spaces became available, a tucked-away corner suite of 772 N. High St. Then, a mutual friend connected him to Silas Caeton, who has previously worked at Cosecha Cocina, Salt & Pine, Veritas, and Lindey’s. “[We] wouldn’t be what we are without Silas,” Crowley said. “It was very fortuitous that we found each other. He values a lot of the same things I do and it’s been a pretty great match.”

Caeton and Crowley approached building The Lox menu with the goal of achieving simple yet high quality offerings. For the bagels, they decided on a cross between Montreal and New York-style baking methods. Though the dough is first boiled in a slightly-sweetened base like a traditional New York-style, it’s then baked in a large Wood Stone oven with a live fire. The result is a bagel with a more Montreal-like crusty exterior and a chewy New York interior. Bagels are offered in four flavors (plain, everything, sea salt and herb, sesame) and can be spread with cream cheese and/or jam, or diners can choose a breakfast or lunch sandwich. Lox and pastrami are both smoked in-house and are available for purchase in bulk. 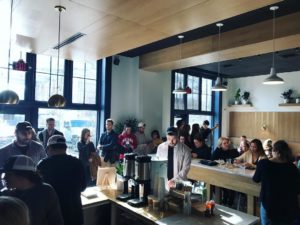 Leading up to the opening, the hype was real. “It’s been overwhelming,” Crowley said. Instagram posts teased glimpses of the menu items and of the shop, a bright space with an inviting design that creates a coffee shop-vibe and cozy experience of which Crowley is proud. Enthusiastic support also came from neighboring businesses including Kaufman Development, Eugene’s Canteen, One Line Coffee, TORSO, Samson Men’s Emporium, Short North Piece of Cake, Mission Coffee, and – of course – Northstar Cafe, with some sharing about the opening in their social media Stories.

As a result, for the first month, The Lox did not answer its phones or accept online or large-quantity orders simply because the walk-in demand was so high. Going forward, Crowley anticipates settling into a groove and is open to potential growth and partnership opportunities. “The neighborhood has shown itself in a way that is pretty awesome,” he said.