On April 28, 2015, opening arguments were made in the Supreme Court of the United States regarding Obergefell v. Hodges. Consolidated with three other cases from Tennessee, Michigan, and Kentucky, this lawsuit, born in Ohio, has the potential to establish the constitutional right to same-sex marriage across the entire nation. On June 20th, the Short North Arts District will be at the center of Columbus Pride celebrations, on the eve of one of the greatest legal decisions of our generation.

This is the moment to be proud. 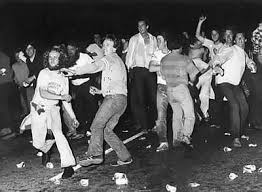 Celebrated across the world by millions, both gay and straight, and somewhere between, Pride is the queer community’s annual commemoration of the birth of the gay rights movement: the 1969 Stonewall Riots. From a dark, dingy bar to a U.S. National Landmark, the Stonewall Inn was the epicenter of a three-day-long riot of nearly 1,000 people, mostly young, poor gay men and drag queens, battling police in the streets. Raids at the time were frequent, especially at Stonewall, the only gay dance floor in New York, when dancing between people of the same gender was illegal.

What started out as routine raid ended up as anything but. Toward 3:00am, a riot broke out as protestors threw bricks and beer bottles while cops hauled trans* individuals into paddy wagons for breaking the laws of public decency. Reporters from every major news outlet in the city captured images and interviews that would prove to be timeless. The Village Voice, with offices only down the street from Stonewall, would go on to report how the evening played out. “The word is out. Christopher Street shall be liberated. The fags have had it with oppression,” reporters said of the riot. 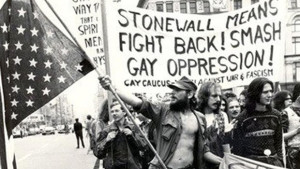 Over the next year, the political landscape changed, with growing membership in the few existing gay and lesbian organizations, and others opening up across the country. On June 28, 1970, exactly one year after the Stonewall riots, marked Christopher Street Liberation Day. A few thousand people gathered and put on the first gay pride celebration in history. The year after, pride celebrations took off in most major American cities, as well as London, Paris, and West Berlin.

Forty-five years later, Columbus celebrates a much different Pride than the first. In the past decades, the queer community through tireless efforts by activists, artists, politicians, and neighbors, has enjoyed an explosion of support which every older generation attests was unthinkable when they were young. No longer fighting just for the right to be, the battles are now over equality, a goal that was laughable 20 years ago. A perfect testament to this will be seen in Columbus this year, with the grand marshal of the annual Pride parade, Jim Obergefell.

Expected to be announced at the end of July, one of the defining moments of the LGBT rights movement in America will occur at the Supreme Court’s decision regarding Obergefell v. Hodges. Jim and his partner John Arthur were married in Maryland on July 11, 2013 (Maryland approved same-sex marriage in January 2013). Living in Cincinnati, the struggle however would present itself for the couple here in Ohio.

A longtime sufferer of ALS, a disorder in which neurons in the brain and spinal cord rapidly fail into old age, Jim married John nearly completely paralyzed, bed ridden, and unable to leave their plane after landing in Baltimore for the ceremony, only 10 minutes long in the end. John died soon after. The Ohio Registrar accepts Jim’s identification on John’s death certificate as a surviving spouse. The Office of the Attorney General does not. Ohio’s ban on same-sex marriage would be upheld; however, the couple’s case was gaining the momentum that would eventually carry it across state lines towards D.C. On November 14, 2014, a class action lawsuit was filed in the U.S. Supreme Court, questioning whether Ohio’s refusal to accept legal marriage licenses from other states violated the 14th Amendment’s guarantees of due process and equal protection under the law.

Leading a procession of tens of thousands June 20, Jim will be marching with Stonewall Columbus proclaiming to ‘Be the Change’, the theme behind Pride this year. It couldn’t find a better home than here. Coming to a close in Goodale Park, the parade and the bulk of celebration surrounding Pride will occur in the Short North Arts District. Surrounded by art, both in the galleries and along the streets, performance, and music, the District exudes guts and gall, creating a space for self-expression and openness that serves as anchor for queer life in the entire region. 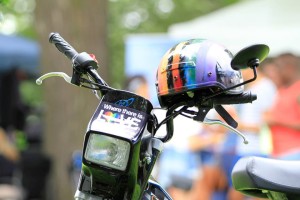 Considering the size of Columbus compared to our neighbors, the scale and visibility of our LGBT community is a surprise to many, especially East and West coasters. Nestled between the two centers of American queer history, New York and San Francisco, the Midwest is often thought of and portrayed as somewhere LGBT people escape from, not flock to. Life in Columbus is by far an exception to this too-commonly believed rule. With the Short North Arts District in the very heart of the city, fueling its creative energy, Columbus contains the excitement, diversity, and range of experiences of a city several times its’ own size, and deserves it’s attention as one of the up-and-coming LGBT destinations of the nation. 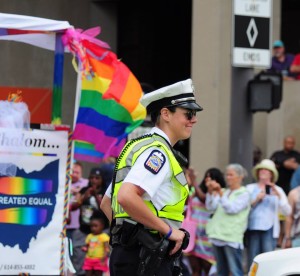 Receiving a perfect score of 100 from the Municipal Equality Index, HRC’s evaluating body of LGBT municipal legal inclusivity, Columbus shines as a city of allies. Rainbow pride flags fly from houses and storefronts along Goodale Park, High Street, and throughout Italian Village all year long. The distinction between ‘gay’ and ‘gay friendly’ establishments in the Short North Arts District is so blurred it’s practically nonexistent. Now nationally recognized, the FCK H8 Campaign, known for their viral video series and daring celeb photo shoots, calls the District home. The Ohio State University, a stone’s throw North of the Short North, is one of fewer than 30 institutions of higher learning in the Midwest with study paths in Gender and/or Sexuality Studies, out of over 500 in the Great Lakes region alone.

Spearheading Columbus Pride is Stonewall Columbus, also headquartered in the Short North Arts District. Cultivating the city’s Pride celebrations for years, Stonewall Columbus has estimated over 400,000 participants in 2014’s Pride celebrations. This gives Columbus the distinction of having the second largest Pride in the Midwest, surpassed only by Chicago, despite the fact that Columbus is 10th in the region in terms of metro population. 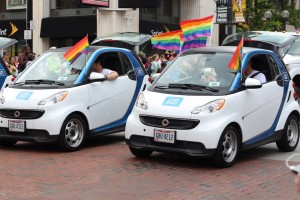 As the fastest growing city in the Midwest, 15th fastest in the country, Columbus is quickly becoming a regional hub for new growth and new ideas. With well established local groups and events such as Columbus Startup Week, Designing Local, and the Columbus Young Professionals Club (all centered in or near the Short North), as well as large numbers of marketing, digital research and media outlets, fashion retailers, and arts spaces, the city is turning into a very attractive option for the younger generation. Recent college graduates come to the city with its myriad options for affordable urban living and plentiful job opportunities, and with them come their ideas. With the Pew Research Center determining that nearly 3/4 of millennials favor same-sex marriage, coupled with numerous universities and colleges dotting the city, it’s no surprise that Columbus is becoming a destination and model community for LGBT life in the Midwest, and progessivism in general. With it’s parade closing in one of the fastest developing and most artistically diverse areas of the city, the Short North Arts District, in many ways Columbus Pride is the annual apex of these new trends. 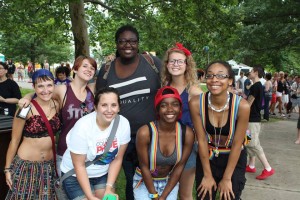 The reasons to come and visit pride are many. Watching the parade, hitting the bars, all night dancing, music, the arts in the District, mostly though, it’s just an important thing to do. Show support for your loved ones, yourself, your friends, family, history, anyone and anything who needs it. Pride is a celebration unlike any other, where showing up, being yourself, and having fun IS the point. Come and let the world see who you are.

For out of towners needing a place to stay, or locals who just want to stay close to all the action, the Short North Arts District has some of the best lodging options in the city. From cozy bed and breakfasts, chic lofts, to luxury hotels, check out all of of them here.

Proudly serving up the widest (and tastiest) array of cuisine, the Short North Arts District is the center of Columbus’ culinary scene. From breakfast, brunch, lunch, to dinner, every plate here gets a level of attention that’s sure to satisfy. Check out all of the District’s spots to grab a bite here.

And finally, once the the bags are unpacked, parade has ended, and your stomach is full, the arches along High Street light up to shine on the best place for nightlife in the city. Theater, performance halls, bars, music venues, and dance clubs dot the District and keep the pulse of the city going well into the early morning. Check out all of our destinations for revelry here.