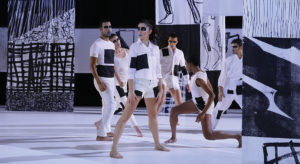 The visually dynamic performance is a collaboration between video artist Charles Atlas and choreographers Rashaun Mitchell and Silas Riener—all three alumni of Merce Cunningham Dance Company. The evening opens with a transporting, 3-D dance film directed by Atlas, and, following an intermission, shifts to a live performance with six dancers carving out intricate, playful patterns behind a mammoth translucent scrim. Captured live by multiple cameras and manipulated by Atlas as the action unfolds, their movement is projected back onto this screen as floating, digital specters. Just as a tesseract is a cube projected into four-dimensional space, this mind-bending hybrid of dance and cinema expands the language of both mediums for today’s tech-driven world.

The 3-D film also features an aptly futuristic score by Austrian guitarist and composer Christian Fennesz, while the live performance is accompanied by a hybrid of electronics and voice created by Mas Ysa.

More about the artists
A pioneer in combining the worlds of filmmaking/video art and performance, Charles Atlas launched his career working as a lighting and set designer for Merce Cunningham Dance Company before becoming its filmmaker-in-residence. Together with Cunningham, Atlas developed what he called “media dance,” or works in which the camera performs along with the dancers being filmed. In addition to working with Cunningham and dance artists Michael Clark and Yvonne Rainer, Atlas has collaborated with visual artists such as Robert Rauschenberg and Andy Warhol.

Since 2010 Rashaun Mitchell and Silas Riener have created dance in response to complex spatial environments, often merging elements of fantasy, absurdity, and contemplation into multifaceted performance works. After working together in the Merce Cunningham Dance Company, the Bessie Award–winning artists developed a keen interest in the way abstraction and representation coincide in the body. Their collaborations have taken many forms, from traditional pieces to site-specific installations and intimate, immersive experiences. Riener performed Cunningham’s Changeling (1957) at the Wex in 2016 at the opening for the survey exhibition Leap Before You Look: Black Mountain College 1933–1957.

This presentation of Tesseract was made possible by the New England Foundation for the Arts’ National Dance Project with lead funding from the Doris Duke Charitable Foundation and The Andrew W. Mellon Foundation.