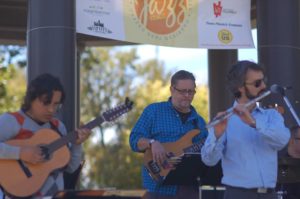 The Harrison West Jazz Stage returns for its fourth season starting Sunday, September 11th  at the Harrison Park Gazebo, welcoming the finest in local jazz talent each week. Kicking off the series is local big band legend Vaughn Wiester, playing the swinging sounds of 1950’s jazz legends like Stan Kenton and Woody Herman. In fact, one of Wiesters’ musical credits includes touring with the famous Woody Herman band in the 70’s.

This year’s musical lineup is as diverse as ever, running the spectrum of the jazz genre. Randy Mather brings his straight ahead jazz saxophone quartet with the soulful stylings of singer Jeanette Williams for the second show of the series. Local jazz-fusion quartet, Magically Delicious, will perform their blend of original compositions of modern jazz, Brazilian jazz, funk and more during the third week. The series concludes on October 2nd with the rhythmic and passionate Brazilian jazz-fusion from Canta Brasil with Brazilian native and drummer, Danny Aguiar.

“Every year the series grows in popularity, with fans coming to Harrison West from all over Central Ohio,” said Mark Subel, co-founder of the series. “We’re excited for our diverse lineup of local jazz talent, from swinging big band sounds to Brazilian jazz fusion. It’s truly a treat to enjoy the best of Columbus’ jazz scene in the beautiful setting of the park and gazebo along the Olentangy River.”

The Harrison West Jazz Stage will take place each Sunday in September from 1 p.m. – 2:30 p.m., starting on September 11th and ending on Sunday, October 2nd.  Concerts will be held around the Harrison Park Gazebo located at West First Avenue and Harrison Park Place. The event is child-friendly with an accompanying playground within the park. All performances are free to the public. Food may be purchased from participating food trucks. A rain date of October 9 has been established in the event of inclement weather on any of the scheduled dates.