The Last Night of Disco 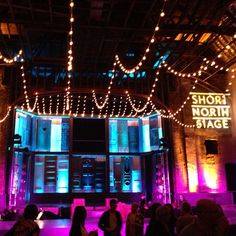 Dazzling! Hedonistic! Throbbing with Disco. That was Studio 54, the Manhattan hangout for celebrities and social elites in the late 1970s. A magnet for stars such as Liza Minelli, Elton John, Rod Stewart, Michael Jackson, Cher, Elizabeth Taylor and such luminaries as Truman Capote and Andy Warhol, this fabled night club closed on February 4, 1980 after its co-owners Steve Rubell and Ian Schrager were convicted of tax evasion. But on that last night, Studio 54 hosted its greatest party—a farewell to its owners.

Now. the Short North Stage recreates that magical night with a world-premiere happening as we transform the stage of the Garden Theater into the legendary night club. Part dance party, part fantasy, and part theater piece, The Last Night of Disco invites you to dance with the cast as if Disco never died. Divas will belt out the songs of Donna Summer, Gloria Gaynor, and Earth, Wind and Fire while hot Go-Go boys take the stage with pulsing choreography. Hit the dance floor, enjoy from the sidelines or reserve a VIP table and watch as the show unfolds around you in a 360 degree immersive theatrical experience. Directed and choreographed by Edward Carignan (A Chorus Line, Hedwig, and Tommy.), The Last Night of Disco will make August sizzle.

Tickets: $20 for Stand and Dance; $30 for VIP reserved seats at a table. Tickets at www.shortnorthstage.org