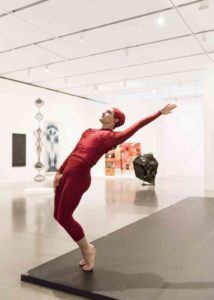 Experience two early solo works by choreographer Merce Cunningham—a highlight of the Leap Before You Look exhibition preview at Wexner Center for the Arts.

As a student in Ohio State’s top-rated Department of Dance in 1998, Daniel Roberts utilized the Labanotation system of choreographic documentation to recreate one of Merce Cunningham’s earliest solo works, Totem Ancestor (1942). Performed on a diagonal line with the dancer leaping from kneeling to crouching positions, the short piece was part of Cunningham’s very first public concerts with composer John Cage. On seeing the results of Robert’s efforts, Cunningham worked with him and endorsed it as the official staging. After graduating, Roberts enjoyed dancing with the Merce Cunningham Dance Company (2000–06), later returning to join the faculty at Ohio State. For this performance, Roberts sets Totem Ancestor on current Ohio State dance student Tommy Batchelor, underscoring how the educational legacy of Black Mountain College connects with Ohio State’s own teaching and learning mission.

An intense work created using chance operations, Cunningham’s Changeling was the third in a trilogy of solos choreographed to piano pieces composed by Christian Wolff, a student of Cage. According to Cunningham, all three solos were “concerned with the possibility of containment and explosion being instantaneous.” Premiering on November 30, 1957, at the Brooklyn Academy of Music, the piece was reconstructed by former MCDC dancers Jean Freebury and Silas Riener in a 2015 Merce Cunningham Trust workshop and first performed by Riener at the Institute of Contemporary Art/Boston as part of their inaugural presentation of Leap Before You Look.

This reconstruction of Changeling was made possible due to the surprise recent discovery of a 1958 film of Cunningham dancing this work accompanied by David Tudor playing Christian Wolff’s music. Long thought lost, the film was made by German television studio Norddeutscher Rundfunk in Hamburg. Riener performs in a costume (also recently reconstructed) originally designed by artist Robert Rauschenberg, who first met Cage and Cunningham while a student at Black Mountain College. The German film of Cunningham dancing Changeling is on view in Leap Before You Look alongside other Black Mountain dance works that include his Septet and Katherine Litz’s The Glyph (1951).

Free for all audiences