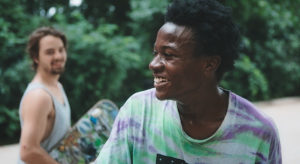 “As a work of nonfiction, it’s stunning; as a piece of storytelling, it’s heartbreaking.” —Alissa Wilkinson, Vox

Winner of the Sundance Film Festival’s Special Jury Award for Breakthrough Filmmaking, Minding the Gap has probably won more film festival audience awards than any other documentary this year, and it’s easy to see why. As a high school student, Bing Liu started documenting the skateboard tricks that he and his buddies would perform in their Rust Belt hometown while trying to escape their volatile families. Over the next decade, Liu continued filming, and in Minding the Gap, we see the threesome become young adults, take on new responsibilities, deal with unexpected revelations, and learn that skateboarding isn’t enough to hold their friendships together as their lives become less simple. With a sprawl of time reminiscent of Steve James’s Hoop Dreams or Richard Linklater’s Boyhood, what starts out as a movie about skateboarding stealthily builds layers of emotion to become a searing portrait of contemporary masculinity. (100 mins., DCP)