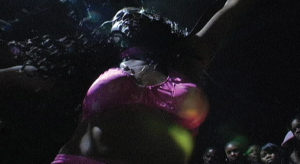 “An unparalleled documentation of a forgotten utopian moment [and a reminder of] just how trailblazing marginalized people from underground culture really are.”—Rooney Elmi, Dazed Digital

From the late 1990s to the early 2000s, Leilah Weinraub was the resident videographer for Shakedown, a weekly party in Los Angeles that functioned as a strip club by and for African American lesbians. In this compelling documentary, Weinraub returns to that footage, adding reflective contemporary interviews with key performers, DJs, audience members, and her own musings to create an intoxicating portrait of the creation, flowering, and demise of a utopian moment—and how to represent it after the fact.

The underground activities of the Shakedown community have often been appropriated by mainstream culture, but this documentary (produced with support from the Wexner Center’s Film/Video Studio Program) provides a place for queer expression where black women’s desires, power, and autonomy can be seen and shown on its own terms. Rooney Elmi, a local film critic and publisher of the magazine SVLLY(wood), will moderate a discussion with the director after the screening. (72 mins., DCP)