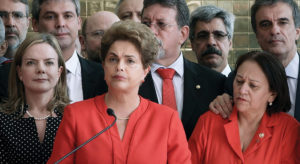 Winner of numerous jury and audience awards at international film festivals, The Trial is a gripping account of one of the most disturbing political spectacles of recent years (and there have been plenty of those lately). Brazilian President Dilma Rousseff was the world’s first democratically elected woman to be impeached, and this film provides amazing access to her trial and its behind-the-scenes machinations.

Jailed and tortured from 1970 to 1972 under the country’s military dictatorship, Rousseff has become a symbol for Brazil’s quest for democracy. But trumped-up charges against her (essentially about accounting procedures) by criminally convicted corrupt politicians bring her to a ludicrous show trial where few people other than Rousseff and her lawyers emerge with any dignity. Fusing the tension of 1970s political thrillers with the drama of a great observational courtroom documentary, The Trial makes it clear that Rousseff was removed from office by a coup without having to resort to explicit commentary. Possible repercussions for contemporary politics outside of Brazil (and the treatment of women in politics) abound. (137 mins., DCP)

• The stunning exhibition Mickalene Thomas: I Can’t See You Without Me

• Plus one free drink ticket!