Hubbard Grille is a locally owned Columbus restaurant featuring modern American cuisine. With a diverse menu catering to various palettes, everyone is sure to discover food they enjoy. The restaurant has been open for almost a decade, and resides in the heart of the Short North. Executive chef Jordan Zacharias describes the food he serves as “intentional, and much 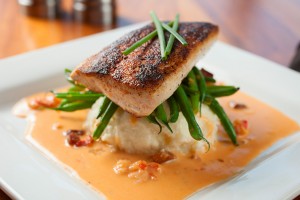 more health-minded than people would expect. [Hubbard] has taken a lot of steps to source high-quality, nutrient-dense products without the guests feeling like they’re missing out on a dining experience.” Zacharias says that over seventy-five percent of the menu is gluten-free. They also offer vegan, vegetarian, and paleo options. Almost everything is made in-house, such as their homemade English muffins. Zacharias says that while it’s time-consuming, it’s well worth it.

Zacharias has loved food since childhood. His mother lived in Japan for a number of years which greatly influenced her style of cooking. She began teaching Zacharias how to cook when he was a child. Years later, Zacharias graduated from Columbus State Community College, completed an apprenticeship with Cameron Mitchell restaurants, and worked under many accomplished chefs throughout his career. He came to Hubbard in September 2013, and is proud to see the restaurant continually evolve. What 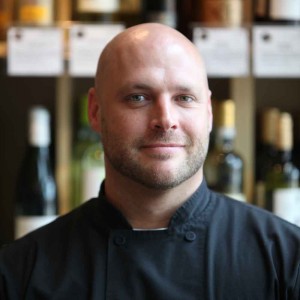 he loves most about Hubbard is the hands-on aspect of the management. He is able to communicate with every staff member on a personal level.

When asked where he gets his culinary inspiration, Zacharias said, “Inspiration is anywhere and everywhere…friends, TV, dining out, reading magazines and books…I mentally taste a dish and go from there.” He even finds inspiration in sustainability. Zacharias works with a local cheesemaker whose farm is eighty percent  sustainable. Her grass-fed cows are a breed that produces a higher fat content than others. She uses the manure her cows produce to fertilize her grass which she feeds the cows. She then brings Zacharias portions of her grass which he uses to smoke potatoes at Hubbard.

Columbus has been a fantastic home for Hubbard Grille. Zacharias says the diversity in

Columbus is what makes it such a great location. He says that the Short North is “a very open-minded community where you can be yourself. That leads to a broader culinary palette.” While the Short North neighborhood has grown, so has the culinary competition. Zacharias says that it’s worth the challenge of competition when customers reach out and praise Hubbard’s diverse cuisine.

Zacharias attended the 2016 Short North Gala with Hubbard Grille, and recalls having a wonderful time. What he enjoyed most was the opportunity to step outside his typical environment and talk to people on a personal level. Zacharias said, “It brings the community together and you get to see all your restaurant buddies.” He has participated in two Galas and will be attending this year’s as well.