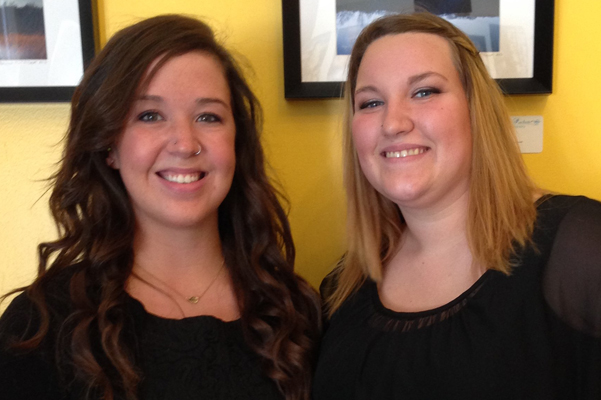 When Laura Hays and Amanda Morehart found their current home at Short North Piece of Cake, the answer to their culinary aspirations couldn’t have been sweeter.

Hays’ love of baking began with her mom and continued through high school while she worked at various restaurants. “Continuing in this field just felt right,” Hays said. “I decided to go to culinary school and have loved it ever since.”

Hays graduated with a degree in Baking and Pastries from the Culinary Institute of America in New York, but she kept her sights set on Columbus. “I had wanted to work [at Piece of Cake] since I had graduated,” Hays said. After working at Bakery Gingham in the Short North and Vonn Jazz downtown, she jumped at the opportunity to join the Piece of Cake team in 2010 when she found an online ad for an open position.

Morehart began her pursuit of pastries in high school while attending Eastland Career Center, where she specialized in Culinary Arts. “I loved to bake there, and I kind of took over. I wouldn’t let anybody else do the baking,” Morehart said with a laugh.

After attending Sullivan University in Kentucky, where she earned a degree in Baking and Pastry Arts, Morehart also had her eye on the capital city. “I was kind of looking around Columbus, and everyone in [Piece of Cake] was really nice,” Morehart said. “They gave me the opportunity and I took it.”

Now Head Baker and Assistant Baker respectively, Hays and Morehart relish the opportunity to learn and create. “I love making new things and coming up with different flavor profiles. That keeps my creative side going,” Hays said. Morehart agreed, and added that her favorite part of the job is “tasting everything when it’s done.”

Owner Laura Harter has also been an active and integral member in the effort to keep Short North Piece of Cake fresh. Since joining the bakery a little over five years ago, Harter has helped to incorporate Columbus into the Piece of Cake menu through local collaborations. From Watershed bourbon, used in their bourbon apple pie, to Middle West Spirits’ OYO whiskey, used in their whiskey truffles, “We always use local ingredients,” Morehart said. “Working with Laura has made me more aware of using local, and I love it,” Hays said.

For its first year of participation in the Gala, Piece of Cake will debut passionfruit cheesecake bites. Cheesecake is already a popular bakery item, but Hays, Morehart, and Harter wanted something “that we could put a small twist on,” Hays said. “We wanted to do something tropical, something we’ve never done before,” Morehart said. Piece of Cake will also offer their famous OYO whiskey truffles at the Gala.